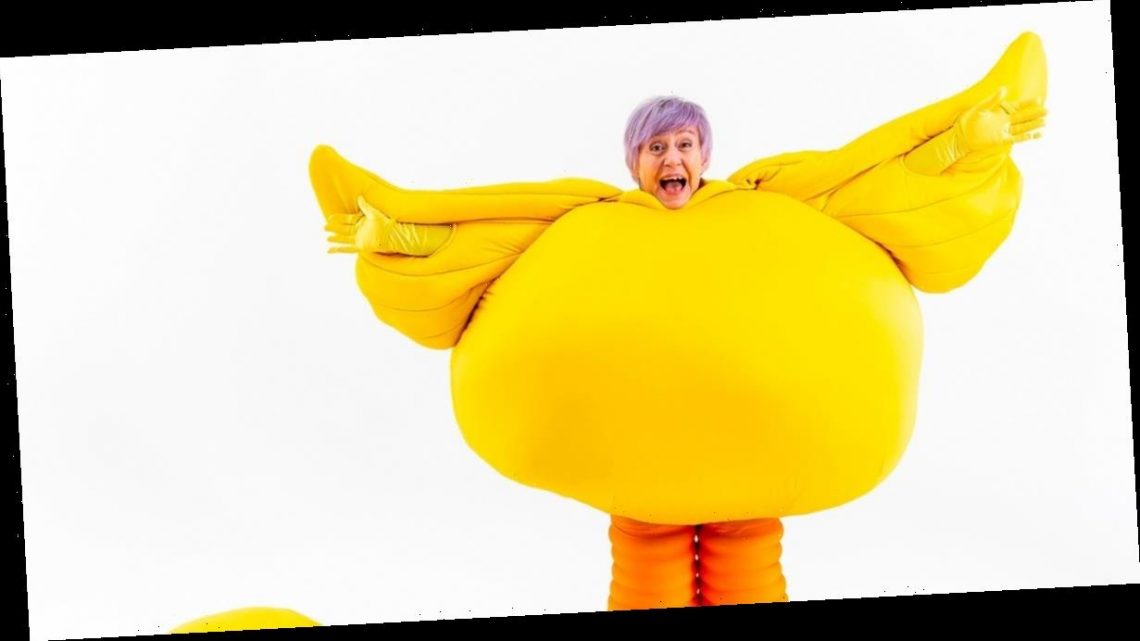 Spending a day in hefty 50kg costumes at The Masked Singer

So, I've wriggled inside the big ­rubber legs, strapped on the webbed feet and stuck my head up the duck’s rear end, popping out through the neck.

Costume makers Lou and Clare have carefully attached my enormous head and given it a twist so I can see out – just – through the bill.

And now that my arms are attached to my wings, I’m starting to flap and shake my tail feathers.

“Action!” shouts Adam, the Mirror photographer, and I take a big breath and start belting out Madonna’s Like A Virgin… like a mad woman.

But a minute later I am out of puff, doubled over and totally quackered.

Fans of ITV hit The Masked Singer, will know how surreal and brilliantly bonkers the celebrity singing contest is.

But when I got to spend a day behind the masks it nearly did my head in – and left me with the utmost respect for the stars who carry a tune dancing around in costumes weighing up to 50kg.

Judges Jonathan Ross, Davina McCall and Rita Ora will be joined by Donny Osmond, who takes over from Ken Jeong as a guest panellist.

The audience will vote for their favourites and the two bottom stars will compete in a sing-off before the loser is finally unmasked.

Last week, Tree was revealed to be footballer Teddy Sheringham and Darkness singer Justin Hawkins was voted off as Chameleon a fortnight ago.

I’m hoping Duck or Monster get the boot tonight so I can find out who is in the costumes prop makers Plunge Creations kindly allowed me to try on.

I travelled to their Brighton studios to hear how a team of 47 designers, sculptors, mould makers, seamstresses and metal workers spent more than 5,000 hours creating the 12 characters.

But, when approached by production company Bandicoot, he decided to go “completely bonkers” and create a unique cast .

He says: “We sat brainstorming and came up with really dotty ideas.

“Chameleon was one of the first. I loved the idea of mood-changes and LED lights. I wanted to make him actually disappear into the set, but that proved a step too far.

"I knew Monster had to be soft and cuddly, so as not to alienate the kids. Duck was always going to be a favourite as she’s so cute. And I wanted some very British characters too, like Fox and Hedgehog.

“Octopus is the biggest, heaviest and most elaborate, but my personal favourite is Tree, he has a wistful, melancholy feel and the costume is beautiful.

“My young son, Tim, also made some origami creatures to go in the branches – a little slug and some butterflies.”

As The Masked Singer relies on the utmost secrecy, Tim’s team had no idea which stars they were designing for until they actually got on set to help fit them.

Clare Bryant, 36, was one of the dressers. She explains: “When we went on set we had tape put over our phone cameras to stop any sneaky pictures.

“The celebs were all walking round dressed in black, wearing gloves, helmets and visors with signs saying, ‘Do not talk to me!’ They could each bring a companion, also in disguise.”

Clare says Patsy Palmer, unmasked as Butterfly in episode one, took secrecy so seriously she wore her helmet to breakfast at her hotel.

Clare’s colleague Lou Murley, 43, says: “We’d get calls asking us to put little clues into the costumes and wonder, ‘So, could they be…?’ But we genuinely had no idea who the stars were until we helped get them into the costumes. My kids and friends have tried everything to get me to tell, but our lips our sealed.”

I try too as Lou and Clare help me into the Tree and Chameleon masks worn by Teddy and Justin. But they are keeping schtum.

Then I clamber inside Monster – the big, blue furry fella. Who could he be? Nile Rodgers, Noel Fieding, Tony Hadley? I search Monster’s insides, hoping to find a hint… a guitar string… eyeliner… something gold? Nothing.

Same with Duck. People think she might be Mel B or Dame Kelly Holmes. But there’s not a whiff of Old Spice or Ralgex because they steam-cleaned the costume.

I can’t think of anyone who fits the bill. And I’m getting hot and sweaty inside the ruddy duck.

So I waddle over to Lou and Clare, flap a wing towards my mask and, like the show’s excited audience each week, start shouting: “Take it off!”