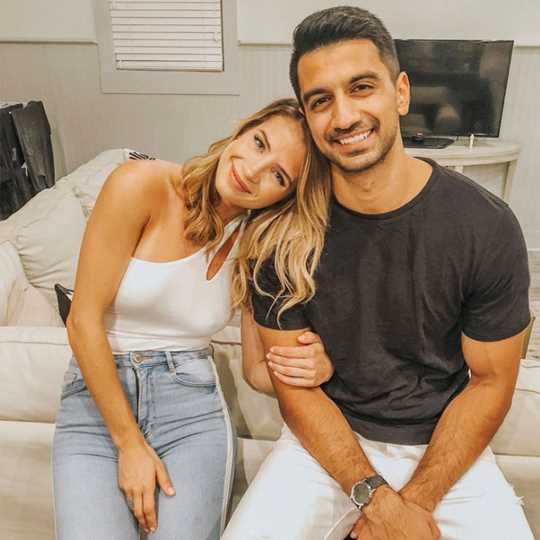 After more than a year together, Naomie Olindo introduced Southern Charm viewers to her boyfriend on the season 6 premiere.

The reality star, 26, has been dating Charleston-based physician Metul Shah, 28, for over a year now, the two going Instagram official with their relationship back in April 2018 (in a loving post Olindo hilariously captioned “pray 4 him“).

Though they’ve been open about their pairing online, Wednesday’s premiere was the first time Shah was seen on Southern Charm.

In the season 5 reunion last July, Olindo was still fighting with ex-boyfriend Craig Conover about their three-year relationship.

But things are very different now. As Olindo boasted in the episode, it’s been nothing but smooth sailing between her and Shah. “I have a new boyfriend and I’m just happy as a clam,” she said. “Metul is one of the smartest people I know. He’s nice, he’s hot, he’s cool, he’s fun, he’s got abs! And he likes me back, which is wild.”

“Metul came along when I least expected somebody to,” she added. “It’s like the greatest thing that ever happened.”

Unlike many of their contemporaries who meet via dating apps, Olindo and Shah met while they were both at the same public gathering. It was lust at first site for Olindo. “I remember I saw him out and was like, ‘He is hot. I want to date him,’ ” she recalled.

That was six months before the Southern Charm cameras picked up in September. Since then, the pair has only gotten closer.

“Thank you for the greatest year of my life,” Olindo wrote to Shah on New Year’s Eve — captioning a series of romantic pictures of her and her man getting cozy at Auberge du Soleil resort in Rutherford, California.

Shah has been living in Charleston since at least June 2017, when he began his residency in anesthesiology. A month before his move, he graduated from medical school at Virginia Commonwealth University.

He takes his job very seriously. “He would never stay out late. He wouldn’t even drink the night before he had to work because people’s lives are at stake,” Olindo said on Wednesday’s Southern Charm. “I would have never appreciated those things had I not been with somebody who was the opposite.”

Though he prioritizes work, Shah still has a lot of fun with Olindo. Their Instagram accounts are filled with photo after photo of them goofing around.

“Glad I could teach you a thing or two tbh ?,” Olindo captioned one picture, of her holding a book upside down.

“Maybe one day I’ll get to portray us as a functional couple capable of taking a presentable photo.. Today is not that day,” Shah teased in a silly outtake from a wedding he posted on his Instagram account.

Traveling also appears to be a big part of their romance.

Back in March, Olindo and Shah had a sun-soaked vacation in Bali, documenting much of the trip on social media (in their coordinating bathing suits).

Before that, in July, the two toured Paris and the French Riviera — stopping in Nice, Villefranche-sur-Mer, and Côte d’Azur.

There’s been another thing that’s bonded them: their love of wine.

During their year of dating, the pair has visited the Bluemont Vineyards in Virginia and the Regusci Winery in Napa Valley, California.

They may not be the most knowledgeable when it comes to the subject, though. “Faking our way through tannins and hints of grass clippings one glass at a time,” she teased during one visit.

All in all, both appear to be happy in their coupling.

Conover is in a good place too, telling his costars in the season premiere that he’s gotten over Olindo and glad to hear she’s moved on.

“We definitely both wish each other the best,” Olindo told PEOPLE in May. “We understand why it didn’t work out, and it’s time to move on and just be happy for each other. It’s a good thing.”

“As long as she stays out of my life, then I’m happy for her. I just don’t want her getting involved with anything I’m doing,” he added. “I knew [Metul] before. It’s what she wanted. She wanted someone with, like, a very structured job, with a real job.”

He did have his share of conspiracy theories, though, on Wednesday’s episode. “I think Naomi is a lot more upset, very secretly about our breakup than she lets off,” he said. “I just hope she’s not willing to sacrifice her own happiness [just to] be right about us.”

Nick Kyrgios Says He's "Fucking Done" During Tantrum, And It's Hard Not To Believe Him