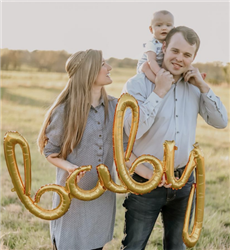 Kendra Caldwell married Joseph Duggar in September 2016, and the couple started trying for children immediately. Nine months later, they welcomed their first son together, and it didn’t take long for Caldwell and Duggar to announce a second pregnancy. While some are excited that the two are expanding their family, others feel that it poses a double standard for women — and that she’s too young. Caldwell was only 19 when she married Duggar

The Duggars have always done things a bit differently than most American families. And it turns out Caldwell’s family lives life very similarly to the Duggars. Caldwell and Duggar met through church, and their relationship moved quickly once they realized there were feelings there. Duggar is about three and a half years older than Caldwell, and they actually met many years before they began courting. However, with Caldwell being a bit younger, their relationship was only casual at first. But once Duggar started to see her in a different light, they started a courtship. They courted, got engaged, and were married all in the same year.

The couple announced they’re expecting a little girl this fall

Exactly nine months after they wed, Duggar and Caldwell announced that they were expecting their first child. Their son, Garrett, was born on June 8, 2018. And in April 2019, the two announced that they’re expecting their first child later this fall. The couple hasn’t announced an official due date, but the baby is likely due sometime in October. Many fans were excited for the two, and there were congratulatory comments all over the post. However, there were a few people who suggested Caldwell announcing two pregnancies before her 21st birthday seemed a bit odd considering her age.

Duggar and Caldwell are thrilled to be welcoming another baby, however, not everyone thinks it’s something that should be celebrated. Reddit users took to the website to post their two cents about Caldwell having two kids at such a young age. “She looks so young. Yikes,” the original poster wrote, alongside a photo of Caldwell with her son. The post received 470 votes, 98% of which agreed with the poster’s comment.

“I like how it’s suddenly not trashy when you’re fundie and white,” one user wrote. “And they think it’s okay because they are married,” someone else said. Another person commented on the “hypocrisy” of “how anyone not in their circles is trashy for doing the same.” It seems that some feel Caldwell’s young pregnancies are a double standard for women who aren’t in her position; she is a reality television star who lives for God, so it’s perfectly fine to be pregnant so young, right? However, someone who wasn’t “fundie and white” in the same position would be judged heavily for having kids so early in life.

Regardless, Caldwell does seem to love the life she lives.The Reddit users pose an interesting argument, suggesting only those who livethe way Caldwell does are allowed to have kids so young without being judged.But Caldwell and Duggar both seem thrilled to be welcoming another baby, and atthe end of the day, that’s all that matters.

A Song in His Heart. It Was for Her.