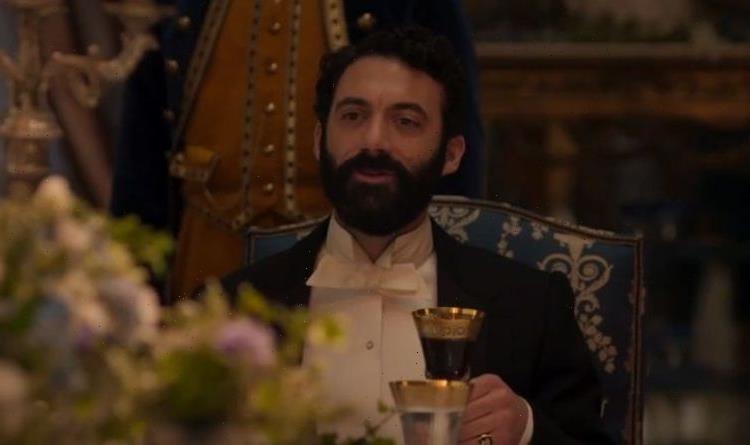 The Gilded Age is the newest period drama to grace viewers’ screens and is hoping to give Downton Abbey and Bridgerton a run for their money. With the social class battle between new and old money waging on, George Russell actor Morgan Spector has opened up about episode three of the show, Face the Music, and  the “personally difficult” scene to shoot.

The HBO and Sky Atlantic series takes fans back to a 19th Century New York.

With an all-star cast, taking on the roles of both fictional and real historical figures, viewers have been gripped since the show aired at the end of January.

The third episode saw George shake things up even more as he pushed on with his plans to build a new railway.

He believed he was finally making progress after Patrick Morris (played by Michel Gill) showed an interest in investing in the project.

However, when he learned Patrick had planned to double-cross him, George turned on the businessman.

Facing a dire financial situation, Patrick returned home after a fiery confrontation and took his own life.

Reflecting on the relationship between the two men and how it ended, Morgan commented: “I don’t know if it surprised me.”

Talking to TVLine, he continued: “In the game he’s playing, he doesn’t really have room to be compassionate.

“Because Michel Gill was so brilliant in that scene, it was personally very difficult for me as an actor to not care and not respond.

“What he was doing was so heartbreaking. And it’s not as if George is unmoved by his pleas. On a human level, I think George would like to respond to Patrick Morris and relieve him of his pain, but he can’t.

“He’s in the middle of something where his family — his entire wealth — is at stake, not to mention this question of honour.”

Morgan went on: “The aldermen have all stood together to try to strip him of everything he’s ever built.

“It’s one of the things that happens in capitalism. There’s not always room for human decency.”

@GoodBuddyKIRK shared their thoughts on the tragic scene: “#TheGildedAge Yet another excellent episode, ce soir Sorry to see the demise of, ‘Mr. Patrick Morris’ though.”

Feeling for the down on his luck Patrick, @BlueRoseMyst added: “George Russell had Patrick Morris kneeling and crying before and still, he will not relent #TheGildedAgeHBO #TheGildedAge.”

Meanwhile, fans are genuinely impressed by George and his ambitious wife Bertha Russell (Carrie Coon), @JoeyMoser83 tweeted: “George Russell shutting down a bazaar to honour his wife’s name on The Gilded Age is the hottest f**king thing I’ve ever seen.”

@BrennanML added: “I have watched and loved the first episode of GILDED AGE, but I will state seriously — George Russell, with his ‘honey, I don’t quite get your desire to dominate your way into high society, and I’m not sure it’ll make you happy, but I support you’ attitude is THE DREAM.”

The Gilded Age is available on HBO in America and Sky Atlantic in the UK. The series is also ready to stream on NOW.

If you have been affected by any of the issues raised in the episode call the Samaritans on 08457 909090 or visit samaritans.org for support.