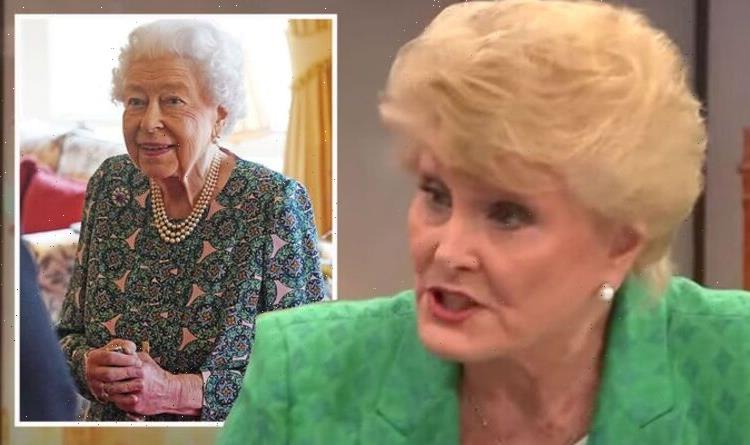 This week, the Queen’s son Prince Andrew reached an out-of-court settlement with Virginia Giuffre. On Wednesday, it was reported the Metropolitan Police would be investigation claims Prince Charles’ charity offered honours to help a Saudi citizen. Reflecting on what the Queen has had to deal with as she celebrates her Platinum Jubilee, GB News host Angela said the monarch “looked vulnerable”.

Joing Angela and Eamonn to discuss the front pages was Clare Muldoon and David Wooding.

Eamonn began: “David we’ll start with you and Angela was saying you were worried about how frail-looking the Queen was.”

David remarked: “Yes, it’s shaping up to be another annuls horribulus for the Queen. Poor Her Maj, she’s had the Prince Andrew case which she’s had to pay out £12million towards the victim of abuse of Epstein.

“And now of course, we’ve got Pricne Charles’ charitybeing investigated for a cash for honours scandal allegedly.

“Her Maj was at a function yesterday and said she’s finding it very difficult to stay in her feet at the moment and it’s been a tough year for her.

“This year has dominating the front pages this morning. Although Prince Charles said he has no knowledge of what was going on.”

Angela interjected: “She is 95. I think she is great for 95 but I just felt that picture made her look, for the first time…”

The guest added: ” I feel very sorry for her. I think she has been a tremendous monarch, not withstanding the fact whe I first started watching season one of The Crown, it showed her to be an absolute stalwart and stoic woman, mother, head of state, tremendous.

“Unfortunately, I think all of her children have let her down badly.”

Angela interrupted: “Not all of them,” with Clare continuing: “William and Kate, his wife, I think are hugely respectful of the monarch, of the title., of the monarchy of themself.”

Comments about the Queen come after she returned to work after fears she may have contracted Covid.

She leaned on a walking stick as she met with the incoming Defence Services Secretary in the Oak Room of her Berkshire Home.

While royal fans may be worried the monarch was suffering from an injury, it was confirmed she was simply “feeling slightly stiff”.

The Queen is heard to have exclaimed: “I’m here,” as the Defence Services Secretary walked past the room.

She told her guest: “As you can seel, I can’t move,” but shook hands and smiled.

Admiral Macleod, who was also present, told her Majesty: “‘I noticed you’ve got Candy keeping guard because as we came down the corridor she was not going to let us get anywhere near you.

“‘She gave us a little growl as we came in yes.”

The Queen replied: “Oh did she,? She doesn’t normally growl.”

Breakfast airs daily on GB News from 6am.