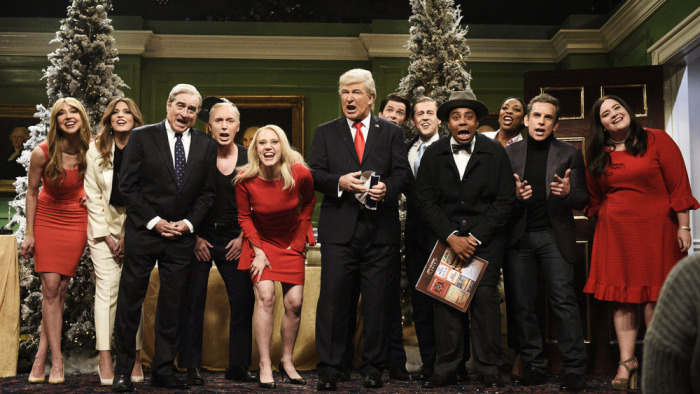 The gang was all there for the final 2018 “Saturday Night Live” cold open. Alec Baldwin returned as Donald Trump, Ben Stiller returned as Michael Cohen, Robert De Niro returned as Robert Mueller and episode host Matt Damon returned as Brett Kavanaugh for a look at what the world would have been like had Trump never been elected in “It’s a Wonderful Trump.”

Kenan Thompson joined Baldwin in the sketch, playing an angel named Clarence who guided Trump through the scenario, including pointing out that all of the things on people’s faces were “smiles.”

Aidy Bryant also appeared as Sarah Huckabee Sanders, laughing and saying it was a “good one” when Baldwin’s Trump asked her to address him as “president.” “I just want to thank you for suggesting I go into PR. I make so much money working for so many awesome companies like Facebook and Ashley Madison and the romaine lettuce association,” she said.

Baldwin’s Trump also commented on how “healthy and vibrant” Kellyanne Conway (Kate McKinnon) looked. “That’s because I’m no longer eaten by within by lies,” she said, adding that after they didn’t win the presidential election the devil gave her her soul back.

In this version of the world Hillary Clinton won the presidency, and she was not off-limits for “SNL’s” jokes either, with Clarence pointing out all she had to do to win was “visit Wisconsin once.” And yes, they knew about her emails but “they were all Bed Bath & Beyond coupons.”

In this version, Eric Trump (Alex Moffat) was also smart, speaking Italian and Spanish and finishing a Rubik’s Cube. Meanwhile, Melania (Cecily Strong) lost her accent after she divorced Trump. “They said being around you was hurting my language skills,” she told him.

Stiller’s Cohen ran in, excited to see Trump, who was less enthusiastic, asking if he shouldn’t be in jail after “flipping” on him. But Stiller’s Cohen claimed he would never do that and said they were not only best friends but also “every single thing I’ve done is because you’ve directed me to do it.”

Even Trump himself was better off in this version of the world. Without his Muslim ban, a young woman (Ego Nwodim) was able to come to America and discover a cure for hair loss, which means that his hair was now “all real.”

And episode host Matt Damon even got in on the action, appearing as Brett Kavanaugh and bringing Baldwin’s Trump a calendar in which “every day was a different beer” — because in this world when he tells people he likes beer, “they find it charming,” rather than threatening, he said.

Finally, De Niro appeared as Mueller right after Baldwin’s Trump posited that it must be a world without Mueller if things were so good.

“I have something for you,” he said. “It’s a picture of my grandson. I’ve been spending so much more time with him since I don’t have to investigate some idiot for treason.”

Yes, that’s right, De Niro’s Mueller knew Baldwin’s Trump used to be president — because he knows everything, he said.

This gave Baldwin’s Trump perspective, and he had the epiphany that the world does need him to be president, which Clarence said was “not the message at all,” but it still worked, and he returned to the real world.

Watch “It’s a Wonderful Trump” below:

Tom Holland Reacts to ‘Spider-Man: Into the Spider-Verse’