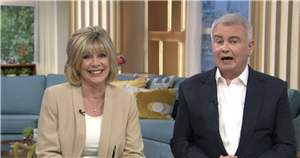 The married couple, both 61, were on This Morning presenting duty on Tuesday and conversation turned to baby names.

Addressing their colleague Dr Zoe Williams' choice to name her son Lisbon Lion, Ruth said that it was because she had met her partner Stuart McKay in Lisbon.

Irish broadcaster Eamonn asked: "Is he a Celtic supporter?"

"I have no idea, darling," wife Ruth replied.

He insisted: "Now you're looking at me like that but the child's called Lisbon Lion – Celtic won the European cup in Portugal in Lisbon in 1967."

"I'm just saying that I don't know," Ruth pointed out.

Eamonn continued: "They were known as the Lisbon Lions."

"Well, OK, if that's your theory…" Ruth said in exasperation.

Eamonn pointed out: "You stopped me calling our child Alex."

Avid Manchester United fan Eamonn retorted: "And you said it was sad and pathetic." "And you called him Jack instead," Eamonn said.

Ruth waved away Eamonn's comment, saying that they would ask Dr Zoe about whether her son was called after the 'Lisbon Lions'.

Eamonn and Ruth began dating in 1996 and welcomed their son six years later in 2002, waiting another eight years to get married in 2010.

However, the pair were not in sync when it came to naming their son, with Eamonn desperate to pay tribute to his beloved Manchester United through the name.

Ruth wasn't having it, though, and the pair ended up calling their only child together Jack.

Eamonn is also a father to Rebecca, Declan and Niall with his ex Gabriella.

Ruth and Eamonn are presenting the ITV daytime show throughout six weeks summer holidays as regular hosts Phillip Schofield and Holly Willoughby take some time off.

They chatted to TV presenter Emma Willis during Tuesday's programme about her new role as Cooking With The Stars host.

Chanel the parrot's owner Sandra Hannah also appeared on the show to inform viewers that her beloved pet had been found.

The African grey parrot escaped for the second time last week but has since safety returned home where she belongs.

This Morning airs weekdays on ITV at 10am

James Bond and Olympics are on the way, so cheer up… it's no time to cry