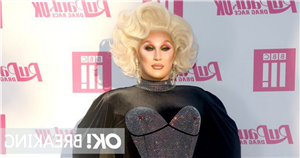 RuPaul's Drag Race UK 2019 winner The Vivienne has been announced as the next Dancing On Ice 2023 contestant.

While Michelle Heaton has also been reported to have joined the hit ITV skating show.

Revealing the news on social media, The Vivienne said: "I'm beyond excited to announce that I will be competing in Dancing on Ice in 2023!

"This is honestly a dream come true and I can't wait to start training on the ice.

"To be the first drag artist to take part in one of the big UK reality competition shows is truly an honour. I think it's a big step forward for queer representation on TV."

Rumours have been swirling around who else will be joining the line up for this year's series with Love Island star Andrew Le Page being tipped as a possible favourite.

Addressing the reports that he’s signed up for the series, Andrew, 27, exclusively told OK! that he’d love to take on the ITV skating show.

"This is the first I’ve heard of it but I’d love to do it if they’d have me," Andrew said. "I can’t dance but I’ve got a very good teacher in Tasha."

Another possible contestant is former Love Islander Laura Anderson who was rumoured to be in talks with ITV bosses to join the skating competition.

The 31 year old reality TV star has auditioned for the show in the past, according to The Sun, and although she impressed the bosses, the blonde Scottish beauty lost out to her ex Wes Nelson.

Regan Gascoigne was the crowned winner ofDancing On Ice 2022 . Speaking after being awarded the trophy, Regan said he never thought he'd win the show, while breaking down in tears.

‘He killed them all’: Survivors recount the terror as police hunt motive for Thailand daycare attack
World News