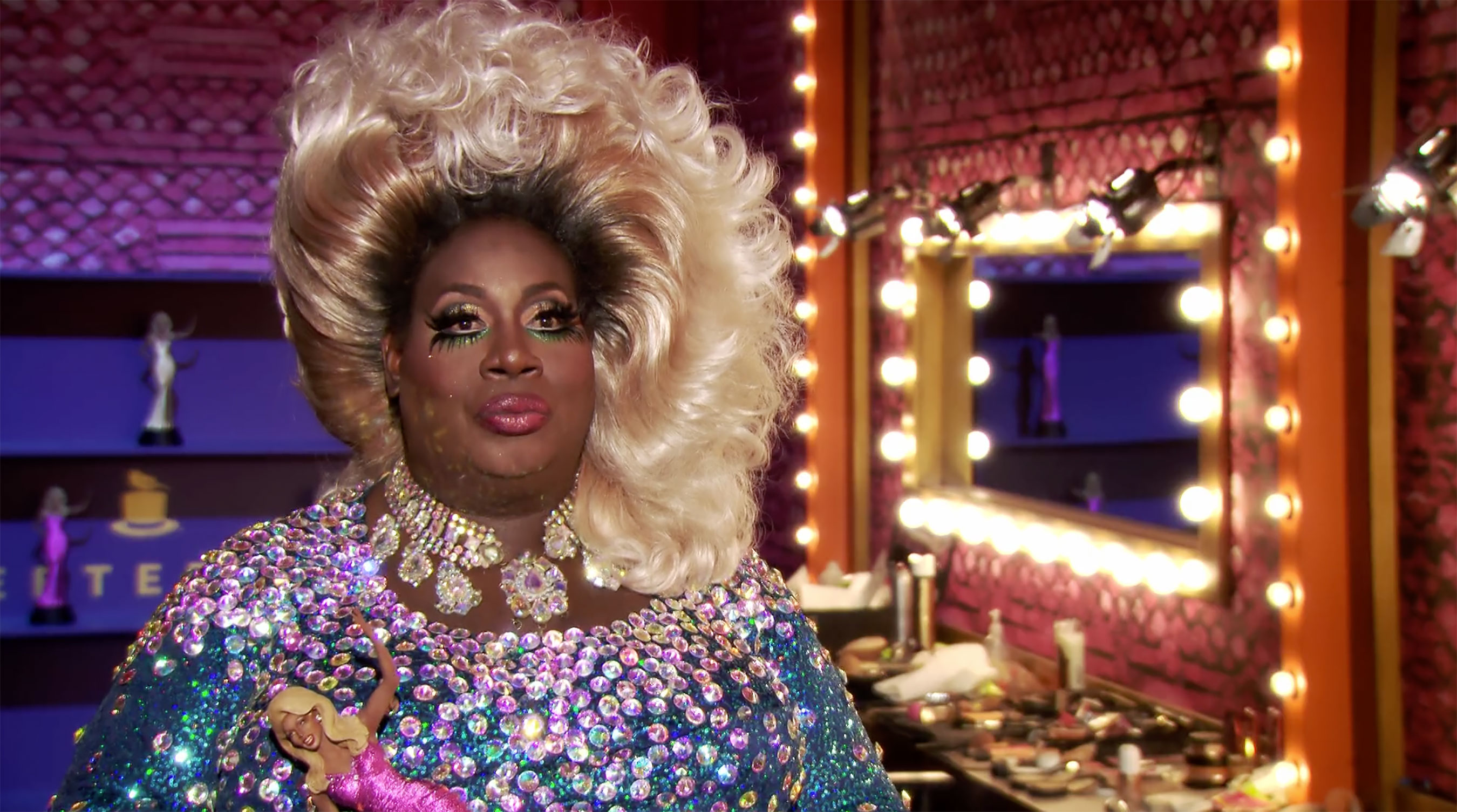 In fact, the “messy children” rubbed Mama right out of the competition altogether, as the fan-favorite icon of the Emmy-winning reality series’ extended family was shockingly sent home by challenge winner Monique Heart after a lackluster performance during the Judge Judy-inspired Jersey Justice acting challenge. And EW caught up with Latrice shortly before Friday’s episode to discuss her time on Drag Race after previously declining a spot on All-Stars 3, losing respect for Monique, and whether she thought Gia Gunn’s pot-stirring antics created good television or bad energy. Read on for the full conversation, and tune in to the next episode of RuPaul’s Drag Race All-Stars 4 Friday, Jan. 11, at 8 p.m. ET on VH1.

ENTERTAINMENT WEEKLY: I truly don’t get upset over these eliminations, but this one hurts, Latrice!
LATRICE ROYALE: Yes, this is how it goes! That’s the name of the game. It’s how it’s played and it’s how we do it. But it’s not unexpected for me.

You were expecting to go home this early?
No, not this early! But I had a feeling that they were gunning for me.

These other girls had it out for you?
Oh, honey! Yes, from day one. I’ve been there twice before and for them — especially the newer girls — they’re like, “This bitch has had her chance twice, so love her or not, she’s the one.”

This is probably the most upsetting Drag Race elimination since Valentina’s on season 9. I’m wondering what advice you have for Monique, who’s probably going to get some heat from the fans for this.
Oh, I have no advice for her because she knew what she was doing! It was calculated and she made a decision and she should know. She knew what she signed up for, so I don’t have any advice for her. Especially now. [Signature Latrice Laugh]

You have no sympathy at all!?
None honey, none at all! Whatever happens, happens. We all know what we’re doing, so boop-boop, bee-doop! I don’t want her getting death threats. Let’s not go crazy. But you know, she’s going to feel it [Laughs].

I can’t believe she tried it. Even Valentina was afraid, because she told Trinity if she was in the top and Trinity was in the bottom, she’d send Trinity home over you because you’re the dearly beloved. Would you have wanted to stay if someone was only keeping you for that reason: because of your legacy, and not necessarily because of your skills?
No, not really. I mean, if it was a valid reason, yes, sure, but I honestly didn’t think that our team was going to be in the bottom. That was the shocking part. When one of your teammates wins and the others are in the bottom, it’s like, what? So that’s why I was like legit no, I didn’t deserve to go home.

You did say on the show that you didn’t think you’d be in the bottom. What made you think it was better than it actually was?
You try to hit all your beats and all your marks, and I feel like we did all of that. We made the best of a bad situation, because those other teams were horrible! Valentina? Horrible!

So you were approaching it more as a refined actress?
That’s exactly my problem! I was thinking we were supposed to do it like a real challenge. But no, you have to make people laugh and you have to be funny.

In the end, it’s just about throwing cake in each other’s face. The unprofessionalism!
Exactly: Cake in the face!

Do you think someone like Monét X Change — a newer queen who doesn’t have the legacy you do — needs to be in the competition more than you because you’ve already built such a legacy?
Sure! The bottom line is: Every bitch in this competition was trying to get to my status and get to my level. It’s not being gloat-y; it’s about being loved, adored, and working. So, yes, sure, someone like Monét, who is definitely a brilliant mind, I’m kind of on her team.

You told me before the season started this kumbaya sisterhood stuff was all bulls—. I know what you mean now after seeing this season — it feels vicious. Even Monique, when you tried to make your case to her, she didn’t really listen.
She wasn’t! Before we even had the conversation, she knew she was sending me home, so she was going through the motions and formalities, and I don’t like that bulls—. I don’t play that! I’m too grown for that. Just tell me straight up, “Look sister, I love you, mean it, but you’re out of here if I win!” Don’t give me the bulls—. I’m not with that. I’m not with it! And so that’s where I lose respect for people that way. I’m cool with the truth, because I’m going to be straight up with you.

Is that a problem on this show? Do you think there’s a generational gap and that the younger queens are too much subscribing to the Gia Gunn mindset of wanting to stir the pot on purpose and make fake, dramatic moments like that?
They were all trying to play a part. You’re over-produced, darling, and underwhelming…. I don’t play games. Tricks are for kids.

That reminds me: You were one of Gia’s Snatch Game victims. What do you think of her drama? She told me she was just making good TV and that people shouldn’t take it so personally.
Um, was it good TV?

I don’t know!
Who decides what’s good TV? That’s not good TV to me. That’s what the messy children like, that kind of drama. Sure, you have to have some fights… but it’s not my cup of tea. Don’t try to make [good] TV at my expense because it’s not cute…. she was there to stir the pot. I think she knew what her role was coming in: to make good television in her mind, so if stirring the pot is her thing, sure, she came with that in mind and it was fun for her but not for us.

Would you say that All-Stars 4 left a bad taste in your mouth?
I left feeling great! Because when you get into the game, you can’t be mad. What are you mad at? What are you upset about? Like, really, girl? Really? And I said going into this that if this experience alters any of our relationship or friendships, then we were never friends in the first place. And I really feel like that. So I’m friendly with — but I wouldn’t call them friends —  [these queens] so nothing has changed for me in terms of how I feel about these girls. They revealed to me who they are and I love that part of it, but it was a game and it was fun and we’re cool. I’m cool, at least. I’m not a sore loser by any stretch of the imagination because I’m not losing; I’m still going to be Latrice Motherf—ing Royale no matter what.

I love that! Latrice, you’re such a good role model for the community. You’ve overcome a lot in your past, you just got your voting rights back, you got married, you’re back on TV, it has been such a pleasure seeing you do it all and I definitely want to see you on another season. Would you do All-Stars 5 or are you done with Drag Race?
I think not! We squeezed all the blood out of this turnip that we’re gonna get out of the RuPaul’s Drag Race franchise. Hallelujah, thank you, Jesus. It’s been fun, but girl gotta run, honey! I’ll come back and play with ya’ll some time, but she ain’t got time for this. No more, ever again!

It breaks my heart but I think it’s the right decision for you. I trust you!
Of course. You have to go bigger and better and I love what this program is doing, and to be able to share my story and inspire people, that’s the goal. Mission accomplished! But $100,000? I can make that in no time. Trust and believe that. I’m not there for that; I was never there for that. That’s the truth!