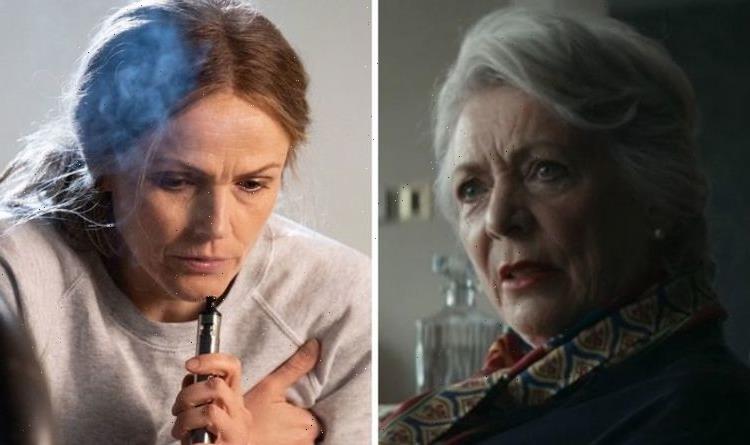 BBC’s four-part drama Rules of the Game ended tonight and left viewers with more questions than answers as the culprit for the double murders of Amy Dixon (played by Amy Leeson) and Maya Benshaw (Rakhee Thakrar) was revealed. After it was revealed the Jenkins family were involved and was using Sam Thompson (Maxine Peake) to cover them up, fans were left more confused than when they first started the show as they picked out seeming plot holes within the murders.

During the beginning of the episode, Sam went into Maya’s office to have a chat with her about a non-disclosure agreement surrounding Amy’s death.

After their conversation, Sam stormed outside and called Owen Jenkins (Ben Batt) in a fluster, telling him she needed to call her immediately and told him: “It’s a mess, it’s gone wrong, really wrong.”

Gareth Jenkins (Kieran Bew) returned to his home and was looking for the red flash drive which Carys Jenkins (Kathrine Pearce) took from his safe and soon found him snooping around, admitting she gave it to Sam.

Sam told Gareth she got rid of the flash drive in the river but soon looked on top of her cupboard where she had hidden it to make sure it was safe.

At the funeral, Tess Jones (Callie Cooke) made a speech about Maya, to which she discussed the flashcards she used to give her with inspirational quotes on.

Sam recognised the cards and had a flashback to when DI Even Preston (Susan Wokoma) showed her Maya’s “suicide” note.

When Sam got home, she received a bank transfer of £500,000 from Haramit Holdings Company, where she confronted Vanessa Jenkins (Zoe Tapper), but she revealed it was Anita Jenkins’ (Alison Steadman) account.

Confronting Anita about the money, she lied and told her it was a bonus, but Sam rumbled her and soon revealed it was hush money, as she admitted to being the one who killed Maya, along with Owen.

Anita visited Maya on the night she died and begged her not to go to the police about Amy’s death before crushing pills into her whiskey whilst she was in the bathroom.

She called upon the help of her son Owen, who threw her over the edge of the balcony to make it look like she had committed suicide.

After Maya’s mother left the country, Sam snuck into her house to retrieve the CD ROM that Owen was looking for but was confronted by an angry Owen, who then attacked her.

As she struggled to get free, Sam hit Owen multiple times over the head, with him soon falling unconscious on the floor.

Sam called the police and admitted she thought she had killed him, and back at the station, Gareth is seen walking through the lobby in handcuffs.

Speaking to the police, Sam revealed everything she knew about Amy and Maya’s murders, giving Owen, Gareth, and Anita up as the people involved.

Annoyed at the supposed plot holes and mistakes made throughout the episode, viewers took to Twitter to express their annoyance with others.

@PickMeFirst added: “There would be DNA on the rails and handprints, no? #RulesOfTheGame.”

@SamSnellings tweeted: “Why didn’t she just use the front door which she knew was open instead of struggling for the back one?”

@OliReading argued: “#RulesOfTheGame the entry record only proves that someone used her pass to get in, though?”

@magsmcormick echoed: “I’m sorry, but there would have been some sort of fingerprint evidence, no? They were criminal masterminds!” (sic)

Rules of the Game is available to watch on catch-up on BBC iPlayer.