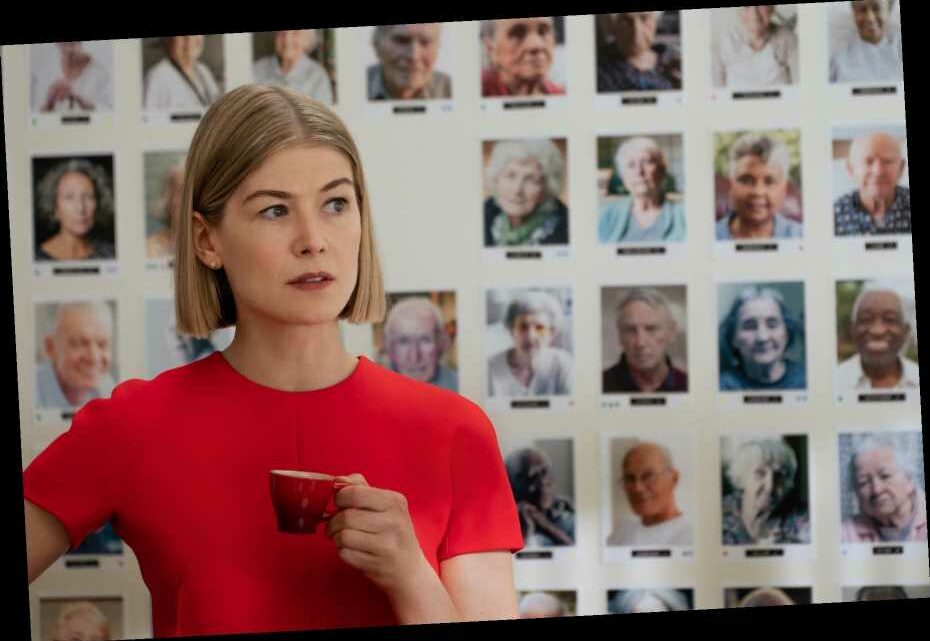 Rosamund Pike's Smile Says It All in 'I Care a Lot'

There’s a genre of smile, that wide, gleaming, shit-stirring grin that says: I hate you. And also: I’m going to kill you. Can we call it the Pike? After Rosamund, of course, who serves it better than most anyone working in movies at the moment, and who has the added asset of a voice that adds a layer of wonderful threat to that smile — a contralto purr that can make any line, no matter how nonsensical or overly explanatory, feel magnetically, appealingly dangerous. That voice and smile were the essence of Gone Girl — to which Rosamund Pike’s new film, I Care a Lot (now streaming on Netflix), is somewhat indebted. It’s the stuff that made the “Cool Girl” monologue leap off the page and into our minds, the stuff that gave Pike the range to play two people almost at once: both the genuinely jilted wife and the woman who didn’t want to be a fucking wife in the first place. Heroine and antiheroine: if anyone can negate the difference, collapsing them into one, it’s Pike.

And that smile. It’s no wonder that one of the first things Marla Grayson (Pike) does after getting a tooth knocked out of place, in I Care A Lot, is take a trip to the dentist. Sure, her life is in imminent danger. Her ongoing scam — a convoluted and troublingly plausible scheme in which Marla becomes the legal guardian of semi- or barely-incapacitated elderly marks in order to seize their assets — has been exposed, because, it turns out, she’s messed with the wrong old lady, one Jennifer Peterson (Dianne Wiest). But first: fix that Fortune 500 Fuck You grin. For without that — without the veneer of above-broad professionalism, which is really a cover for her professional immorality — who would she be?

Peter Dinklage: Master of the Game

This isn’t a question that I Care a Lot works overly hard to answer — to its great credit. J Blakeson’s film has its flaws, dawdles and drawls when it’d be better off rocketing along, keeping the energy up, ricocheting from incident to incident with an abandon befitting its heroine. But a thing it gets almost-right is a curious vacuum of information about its Scammer in Chief. What we know: That she’s very good at this, a bit of an old pro who has all the right connections to both nursing home staff and a sympathetic judge (played by Isiah Whitlock Jr.) willing — knowingly or not — to grant her guardian status over the unsuspecting. We know she has a partner in crime, who’s also her partner in life, named Fran (a refreshing Eiza González). We know she has Pike’s classic murder bob — that she’s a powerful woman, ruthless if she has to be, and maybe even if she doesn’t have to be.

But when I Care a Lot gets going, it seems Marla has landed herself a bad target, a woman she believes to have no family ties (thus no one to come looking for her) who, in fact, has ties, namely to a quietly raging Roman Lunyov (Peter Dinklage). And then we’re off. It’s a world peopled by a fantastic cast (rounded out by Macon Blair, Damian Young, Alicia Witt, and Chris Messina, and others), a solid bit of intrigue, and a lot of ground to cover. Too much ground, maybe, for the film to go as sky-high as its potential suggests.

A case in point: Though the scam in itself is dastardly and notable, what proves most notable about Blakeson’s efforts are the one-on-one showdowns between Pike her and bitter enemies, namely those played by Wiest, Dinklage, and a sharp-suited but apparently toothless Messina. What’s memorable are the close-ups: on that Pike (we’re trademarking the smile; it has been decided), on Dinklage’s cool and curious rage, on Messina’s bright-eyed shark, on Wiest when she serves lines like, “Have at it, you little crock of cunt.” (Wiest, an all-time great, obviously savors the alliteration there.)

It’s when the movie tries to get us to see the “point” that it flails a little, though not because the point isn’t worth making. In fact, what sails highest by the film’s end are the ideas we see in action, rather than through explanation. The ideas about how Marla became the woman she is, about the inner source of all that vindictive fire of hers, which, again, are not overly explained (except by a sometimes-cloying voiceover that even Pike can’t make convincing). If only the movie had been whittled down a little to heighten the razor’s edge at its center.

I Care a Lot definitely has a political critique on its mind, a song to the tune of something-something-Late Capitalism, which the biting sarcasm of the movie’s swift succession of late scenes confirms but doesn’t quite nail. There is indeed a really good, witheringly sharp movie buried in I Care A Lot. But it gets a little lost in all the goings-on. The energy of its best scenes and performances isn’t matched by the movie itself, which spends too much time with its eye trained elsewhere, on complex but unexciting bits of exposition which, rather than adding clarity, only serve to get in the way. The movie drops the ball in its third act — then swings back around to an act of violence which, had the movie really lived up to its promise to that point, might have proven to be the guns blazing (literally) Fuck you that Marla Grayson otherwise handsomely represents and also, importantly, betrays. See the movie for the performances and the concept — and watch it closely for the potential it contains, but doesn’t entirely exploit.