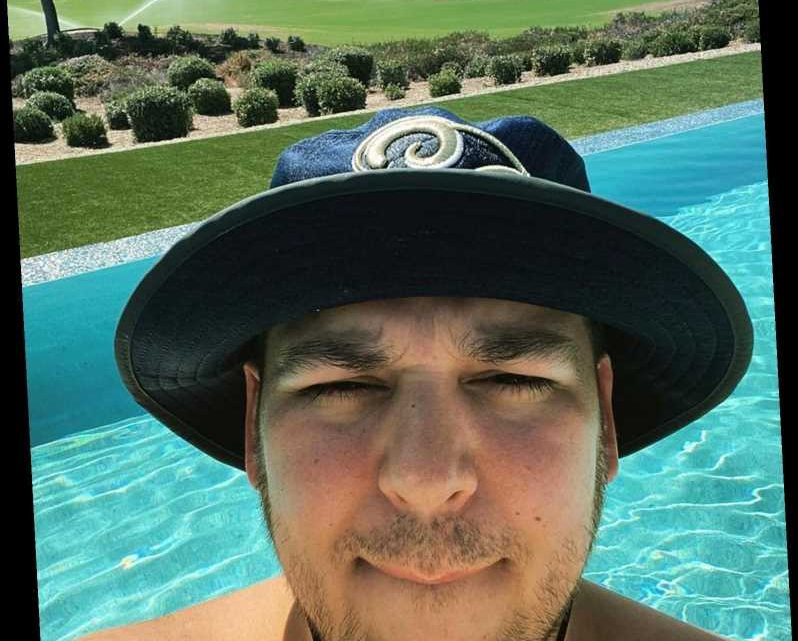 Rob Kardashian is keeping cool in the summer heat and showing off his figure amid his journey to all-around wellness.

The Keeping Up with the Kardashians star, 33, used social media on Monday to share a photo of himself standing shirtless in a glistening pool with a nearby golf course in the background.

Wearing a Los Angeles Rams bucket hat and a black necklace, the reality star snapped the selfie and captioned the shot with a quote from the comic book character Bane from Christopher Nolan's The Dark Knight Rises film.

"I didn't see the light until I was already a man, by then it was nothing to me but blinding," he wrote.

Social media commentators used the comment section to react to Rob's post, with one user writing, "Looking great! Keep up with your happiness," as another added, "Looking like a snack 😜."

The same day, he posted another shot of the pool, captioning it, "God's work !!"

Rob's poolside selfie comes after a source previously told PEOPLE that he has been intentional about improving his overall well-being.

"Rob is doing well. He takes care of himself, works out and eats better," the source said about Rob, who has struggled with depression, weight gain and type 2 diabetes in recent years.

"For a long time, he was unhappy and embarrassed about the way he looked," the source said about the father of one.

But now, "he knows he looks better. He is comfortable enough to be photographed," the source shared. "He wants people to know that he is doing well."

Khloé Kardashian even revealed that Rob, who has slowly reemerged into the public eye in recent months, is turning over a new leaf and will spend more time in front of the camera when KUWTK returns in September.

"We never push him, everything is his free will," she continued. "We always take photos — we have so many memories, but nothing public, so I was really happy because on my birthday, he said, 'Oh, you can post that. I'm fine, I feel good.' It made us feel so good that he was comfortable. And the reaction from the public was so positive that it gave him a boost of confidence."

"So now he is filming more," she added. "We're filming more within our homes, and he is right there with us. I'm excited for everyone to see that. He's such a good person and I'm just happy he's coming back around on camera a little bit more."