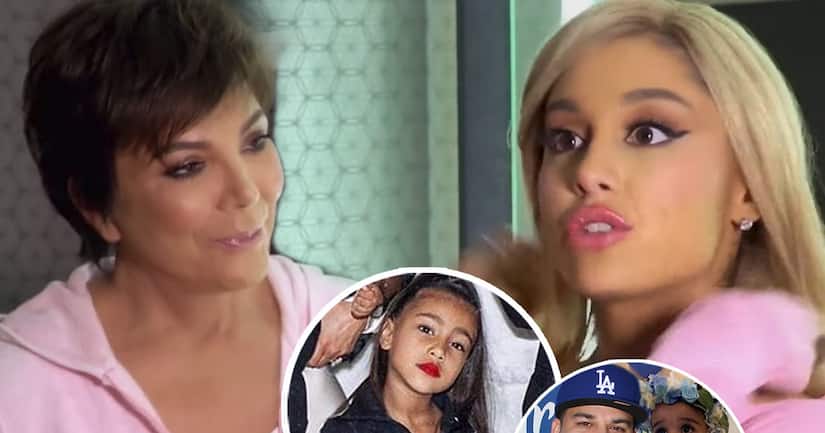 Dream’s birthday party was hosted by Auntie Kylie. It’s the least she can do for her ex-boyfriend’s son’s sister.

The woman behind Nori’s Black Book — a viral parody Instagram account written entirely in the voice of Kim Kardashian’s sassy 5-year-old daughter — is bringing her talents to TooFab.

Each week, "Nori" will be recapping new episodes of "Keeping Up with the Kardashians" and giving us HER take on all the family drama.

(NOTE: The below was not actually written by North West.)

Sunday’s episode of "Keeping Up with the Kardashians" started with a dinner celebrating the Kylie Cosmetics collaboration with former friend of the family Jordyn Woods. As you know, Auntie Kylie and Jordyn’s collection now no longer exists.

In the next scene, Uncle Rob made an unexpected cameo and took Dream to go visit Auntie Khloe. Dream will be 2 soon, and thanks to the Los Angeles Superior Court, Rob gets to have her on her actually birthday this year.

In San Francisco, Mommy went to the cut50 office, which is an organization set up by Van Jones and Jessica Jackson that works to cut crime and incarceration in all 50 states by translating local needs into safety solutions — at least that’s what the website says. Mommy and Jessica are working on a prison reform legislation called the First Step Act. This act will help prison conditions and reunite people with their families. Mommy was excited to support it and help it get passed.

Later, Kris visited Auntie Kendall at a photo shoot. Kris told her that she was going to be in Ariana Grande’s music video for "Thank You Next" and that she was so excited, proudly announcing that she is now officially a "video ho." I’m okay with her being a video ho as long as this is as far as it goes. My heart and stomach can’t handle a Kris and Corey sex tape.

Back in Calabasas, Auntie Khloe was working on evacuating due to a massive brush fire that took over Southern California. The evacuation was voluntary at first, but eventually, it became mandatory. Uncle Rob did not want to evacuate because Dream’s birthday was the next day, and he had a birthday party planned. And let’s face it: He couldn’t afford to lose his deposit. He and Auntie Khloe fought about it, but he later came to his senses and stayed at a friend’s house. Khloe was freaking out because everyone’s house is in one area and she was scared everyone would lose their homes.

While the wildfire was happening, Auntie Kylie was on tour with Travis Scott, Scott Disick was at his alleged apartment in Beverly Hills, Auntie Kendall wasn’t required to evacuate her house, and Kris and Corey were at their condo. The rest of us were at the hotel together. The true meaning of hell is being trapped in a hotel suite with the Disick kids.

A few days later, Mommy was originally going to have Alice Johnson (the women she helped get out of prison) and her family come cook dinner for our family at her house, but because of the evacuation, she had to have her meet at Kendall’s house. Kris was emotional during the dinner. She was either touched by Alice’s story, or she was in her feelings because the food Alice made was way better than anything Kris put in her cookbook.

In the next scene, Mommy attended a prison reform summit. Mommy told Van Jones she was dying over all the reading she had to do for law school, so he gave her some words of encouragement and told her she could do it. (I try to encourage her too when I can, but most of the time, I just have my assistant do it.) During the summit, Mommy and the team learned that President Trump endorsed the First Step Act. This was a great moment for everyone.

Later, the family got clearance to come back to their homes. Luckily, everyone’s house survived the wildfires. Of course, True came home in a fresh turban. Dream still ended up having her birthday party days after the evacuation, and it was hosted by Auntie Kylie. It’s the least she can do for her ex-boyfriend’s son’s sister. The party was a success!

In the final scene, Scott, Auntie Khloe and Auntie Kourt went to diner at a Kardashian favorite — Casa Vega. Auntie Kourtney brought her own salad because she said she was on a strict diet, but we all knew it was because she was short on cash after throwing all her money at a web designer for Poosh. Fresh off of her cameo in Ariana Grande’s video, Kris came to the restaurant in all her glory to gloat that she was trending on Twitter. It was so unbearable.

Meet me back here next week when I recap Episode 6 of my show.

From Broadway, To ‘Booksmart,’ To ‘Bonding,’ Stephanie Styles Has Found Her Spotlight