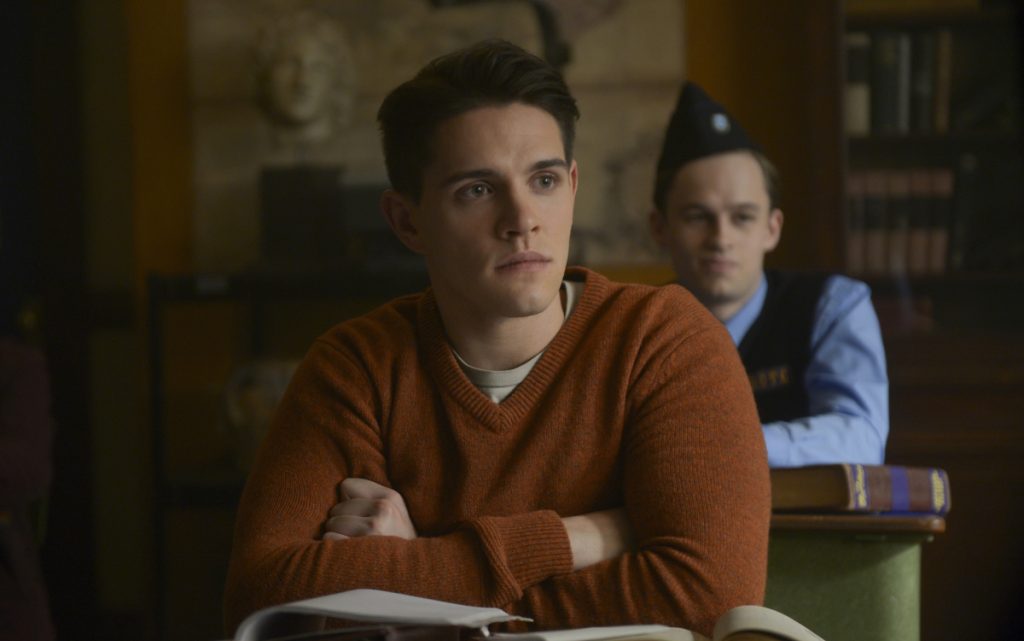 Riverdale Recap: The B Team

Need to catch up? Check out our previous Riverdale recap here.

If you’ve been hoping for Kevin and Josie to get more screentime on Riverdale, your prayers were answered the week, as the supporting cast stepped fully into the spotlight.

Kevin’s dad Tom and Josie’s mom Sierra are getting married, and Kevin takes the opportunity to ask Moose to be his date — and come out to his hard-nosed RROTC instructor dad Marcus. (His dad declines an invite to the wedding, because Sierra thinks he’s always had a crush on her. Hmmm.) Moose hesitates to declare his love, though, and inches further into the closet when Cheryl nearly outs him during a morning announcement at school. But the real drama starts when Tom and Sierra get a surprise message from the Gargoyle King, instructing them to reassemble the Midnight Club and “complete Ascension Night.”

The parents (including a still-hobbled Hiram) agree they need to finish their decades-old game of G&G to satisfy the Gargoyle King. And when Kevin gives Moose an ultimatum — come out to your dad, and we’re breaking up — it actually works, and the two lovebirds decide to consummate their newly official romance with a romp in Dilton’s bunker. But when the parents bust into Riverdale High, prepared to sip from the poisoned chalices with the help of Penelope’s cyanide antidote, all they find is a big horned skull and a note scrawled in blood reading, “Got You.” Just then, Kevin and Moose are plucked out of the bunker by a gang of toughs in gargoyle masks.

They’re taken to the woods to meet the Gargoyle King, and nearly forced to sip from a cyanide-laced chalice… when Cheryl and the parents storm in and stop them. The Gargoyle King is unmasked: It’s Moose’s dad Marcus, with the RROTC kids as his gargoyles. He was trying to scare his son straight, because he had his own “impure thoughts” as a teen — he tried to kiss Kevin’s dad! — before he was sent away to the Sisters of Quiet Mercy for reprogramming. (So he’s a Gargoyle King, but not the Gargoyle King? Do we have that right?) Kevin’s heart gets broken just the same, though, when Moose moves away to live with his aunt, leaving him with just a kiss goodbye.

MOB MAMA | After torching the Fizzle Rocks drug lab, Veronica and Reggie have to come up with some quick cash to satisfy Hermione’s buyer. Reggie thinks it’ll be easy to rip off his dad’s car dealership, but ends up taking a bullet from a security guard and getting sprayed by a dye pack. (He’s kinda like a bumbling burglar from a Coen brothers movie, isn’t he?) They get a real shock, though, when they go to hand over the cash — and Jughead’s mom Gladys is the buyer! (“Oh great, more teenagers,” she grumbles.) Since they’re friends with her son, she offers them a very forgiving payment plan… but demands Reggie’s car as collateral.

Gladys and Jellybean show up at F.P.’s trailer, ready to stay in Riverdale for good. It’s clear, though, that Gladys has some dirty tricks up her sleeve. Is she going to muscle in on Hiram’s turf? Does this mean the end of F.P. and Alice? As long as we get more Gina Gershon, I’m not complaining.

* Archie took a backseat this week, but he did offer Josie support, giving her a ride to her Juilliard audition. She didn’t get a callback, but Archie lifted her spirits by strapping on the ol’ guitar again for a duet — and they kissed! (I knew it! It’d be a shame if she had to ditch him to go co-star in Katy Keene, though.)

* Cheryl set her sights on getting into the tony Highsmith College, but her application got nixed thanks to board member Penelope, who still doesn’t approve of Cheryl and Toni’s romance. Cheryl quickly went into chaos mode, snapping photos of her mom’s Maple Club clients to blackmail her into backing down. She not only got another interview at Highsmith… she got Toni one, too. And what do we think of their new post-Serpents gang, the Pretty Poisons?

* Betty and Jughead, meanwhile, barely made an appearance… but that steamy bedroom scene was worth the wait, right, “Bughead” fans?

* Cheryl pushing Kevin to use the dating app Bumble to find a new guy was so obviously sponsored, I was surprised the Bumble logo didn’t flash on screen.

* Seriously, how many Gargoyle Kings are out there? Is there a costume shop in Riverdale selling those masks and robes at a steep discount?

* If Gladys and F.P. were a thing back in high school, why wasn’t she a member of the Midnight Club?

* LOL at Cheryl warning Kevin to bring fresh sheets to Dilton’s bunker: “A lot of people have had sex on that cot.”