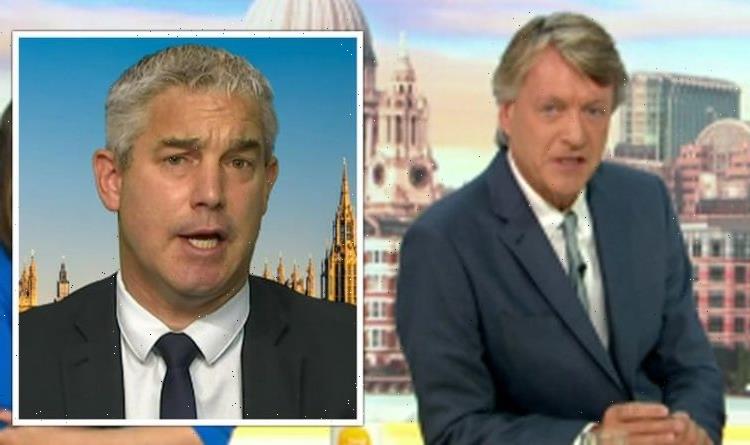 Two days after England lost out to Italy in the Euros 2020 final on penalty shoot outs, Richard Madeley demanded to know what was being done by government to stop racist abuse being spread on social media. Marcus Rashford, Jadon Sancho and Bukayo Saka have all been sent racist abuse online after they missed their penalty on Sunday night. Priti Patel was just one politician who took to Twitter to call out the abuse despite saying England players taking the knee before each game was “gesture politics”. Good Morning Britain host Madeley struggled to contain his anger as Barclay defended the Home Secretary’s latest comments online.

Patel tweeted: “I am disgusted that @England players who have given so much for our country this summer have been subject to vile racist abuse on social media.

“It has no place in our country and I back the police to hold those responsible accountable.”

England player Tyrone Mings hit back at the Home Secretary, writing: “You don’t get to stoke the fire at the beginning of the tournament by labelling our anti-racism message as ‘Gesture Politics’ & then pretend to be disgusted when the very thing we’re campaigning against, happens.”

Speaking to Barclay, Madeley asked if the Home Secretary should “reconsider her position” following the backlash.

Madeley asked: “Do you think she’s been overtaken by events?”

“Well the Prime Minister was asked about this yesterday and I think as he said it’s important that however people want to make their views known in terms of protesting against racism then we respect that including if that is taking the knee,” Barclay replied.

“Do you think the Home Secretary has been overtaken by events and she needs to reconsider her position?

“By that I don’t mean resign but reissue a statement and clarify.”

“Well, the Prime Minister was clear yesterday that we shoulder respect however people want to make their point,” Barclay hit back.

“The Home Secretary herself has been victim of the most appalling online abuse.”

Later in the interview, Susanna Reid noted it wasn’t just the opposition who have hit out at Patel’s comments but also Baroness Warsi from the Conservatives.

“Baroness Warsi said, ‘Priti – we as govt, as @Conservatives need to think about our role in feeding this culture in our country,’” Redi read out.

“If we ‘whistle’ & the ‘dog’ reacts we can’t be shocked if it barks and bites.

Reid continued: “I mean, she’s absolutely right isn’t she and the government needs to have a look at itself.”

“Well that’s why we are legislating to tackle this stuff,” Barclay answered. “One of the great thing abut the Euros was…”

Reid cut him off: “Sorry Baroness Warsi wasn’t talking abut the responsibility of the government when it comes to social media companies, she’s talking about the kind of messages you send out.”

“And that’s what the Prime Minister addressed yesterday,” Barclay explained. “He was asked about this at the press conference Susanna, as you know, and was very clear about the importance of respect and respecting different people’s positions but ultimately tackling this scourge of racism and that’s what we’re working with black footballers to do.”

The Life And Career Of Suzzanne Douglas In Pictures