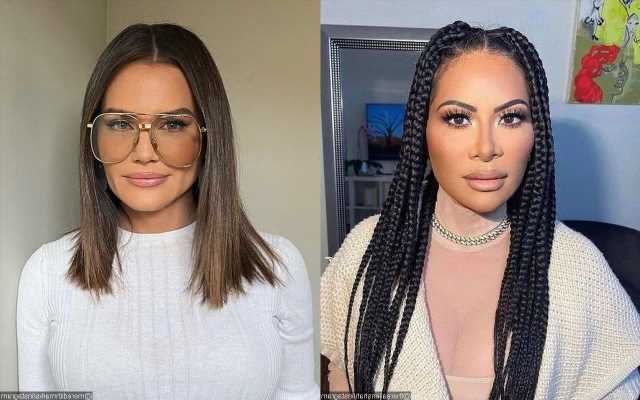 During an after-show, Jen challenges Meredith to call the police if her claim about her assistant stealing from her boutique is true, saying, ‘If that’s the truth, b***h, call the police.’

AceShowbiz -“The Real Housewives of Salt Lake City” star Jen Shah is defending her people. After co-star Meredith Marks accused one of her assistants stole from her boutique in the Sunday, November 14 episode of the Bravo show, Jen took to social media to respond to the accusations.

During an after-show, Jen challenged Meredith to call the police if that was the truth. “If that’s the truth, b***h, call the police. Call 9-1-1. If someone stole from you, call 9-1-1. Or, if you think [it’s] someone on my team, why wouldn’t you call me?” she said. “Why wouldn’t you call me? Because it’s bulls**t. We literally were in there to support your little 200-square-foot swap meet.”

In the episode of “RHOSLC”, Meredith claimed that Jen’s assistant stole a cluth when they were shopping in her Park City boutique store, where they spent “a few hundred dollars.” Meredith said that she told the manager to ask Shah if she had mistakenly taken the clutch. CCTV footage featured in the episode did show Jen’s assistant leaving with the clutch and then returning it.

“Jen did not walk out with a bag,” Marks shared during her confessional. “But what really didn’t sit well with me is she kept someone who she knew did take something out of my store in her employment. That’s not my friend.”

Following the episode, Jen’s assistant Murilo Bueno took to his social media account to address the accusation. “I’d like to address a false accusation made last night by one of the cast members of RHOSLC. The footage she brought up is twisted and chopped,” he wrote.

“This woman is trying to reach from all sides like her life depends on it for a TV show, while having skeletons in her closet. Deflect the attention elsewhere so no one sees the reality of their own lives. I would never steal for myself or for anyone,” Bueno added. “I was raised to be honest, humble, hard worker and to love and respect the people that love me back. I would never disrespect Jen by stealing from one of her friends, she was there to support her store. Why would I want to steal anything?”

Concluding his statement, Murilo shared, “I have always been very careful with my actions and would never jeopardize my well being by stealing anything. But maybe that’s it, she’s already made it clear she’s embarrassed of homosexuality, I’m brown and I know a Karen lives within that one.”