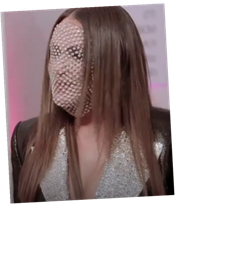 The Real Housewives of Salt Lake City finale “Chilly Reception” will air Feb. 3, 2021. Bravo fans are excited to see how season 1 concludes, but most RHOSLC fans can only talk about one thing. What kind of mask is Meredith Marks wearing in the finale episode?

‘RHOSLC’ Season 1 is coming to an end

The debut season of The Real Housewives of Salt Lake City did not disappoint. Many fans enjoyed watching the drama unfold between the women of Salt Lake City. Most of that drama centered around Jen Shah. Throughout the season, Shah had words with most, if not all, of the other housewives. That includes Mary Cosby, Whitney Rose, and even her closest friend, Heather Gay.

During an interview with Showbiz Cheat Sheet, Shah promised fans will get more clarity on the drama surrounding her friendships this season when the reunion special airs.

Shah filmed the RHOSLC reunion special for 16 and a half hours.

“Girl, you know, we were there for a long time,” Shah revealed during her conversation with Showbiz. “I left there at 11:30 PM after we were done [filming] — I arrived at 7 AM.”

Even Andy Cohen was exhausted. “Andy was like — I think he went live that night from the reunion because we were wearing him out,” Shah laughed. “He was like, ‘Salt Lake City girls are crazy. Why am I still here?’”

Shah believes the reunion will fall in line with the rest of season 1.

“[The reunion will be] very unexpected [and] explosive,” Shah said, continuing:

Fans are going to be very surprised. I think a lot of truth [will] come out in the reunion. [Fans] label [the housewives] how they think that they are. I think the reunion is going to shed more light on that and probably change a lot of opinions.

But before the reunion airs, fans will get to see the dramatic conclusion to season 1 of The Real Housewives of Salt Lake City. Ironically, all fans can think about is what Marks is wearing on her face in the teaser for the episode.

What is Meredith Marks wearing in ‘The Real Housewives of Salt Lake City’ Season 1 finale?

During the teaser for the finale episode of RHOSLC, Gay hosts the grand opening of her new Beauty Lab and Laser location. Naturally, all of the housewives are in attendance, including Marks, who appears to be wearing a face covering. Because this footage was shot in pre-pandemic times, many fans are perplexed by Marks’ style.

“It reminds me of those grip things you put at the bottom of your bathtub,” a fan said of Marks’ headpiece, which resembles bubble wrap.

“She manifested COVID with this horrendous [look],” another Bravo fan on Reddit.

“But let’s admit the real issue at hand is the risk of cornea scratches and that fact that it’s astronomical compared to literally any other piece of clothing in existence,” another fan joked.

Some fans assume Marks’ son Brooks is to blame for the unique style. Others think Marks could be hiding a “filler accident” of some kind. Fans will have to tune in to The Real Housewives of Salt Lake City’s finale to find out what inspired Marks’ outfit at Gay’s Beauty Lab event.