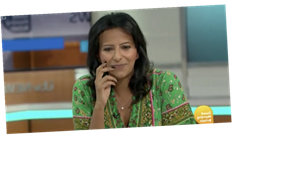 Kate, 53, starred in the eye-opening programme, Finding Derek, to open up on her husband’s year-long health battle after he contracted Covid-19.

Derek, who could remain in hospital until December 20201, was admitted to hospital in March with coronavirus. The 53 year old has since beaten the virus but was left with a number of health conditions including kidney failure, damage to his liver and pancreas as well as heart failure.

Now, Kate’s Good Morning Britain friend Ranvir, 43, admitted she couldn’t bring herself to watch the touching ITV programme over fears she wouldn’t be able to sleep.

“I thought, ‘I’m not going to be able to sleep afterwards,’ I'm going to watch it when it goes on the Hub.

“You know when you know someone and you're stood watching from the sidelines? It's actually just really hard to watch.”

Strictly Come Dancing star Ranvir, who reportedly signed a lucrative new contract with ITV, also recalled the last conversation she had with Derek a few months before he was admitted to hospital.

As a clip of Derek came up on the screen, the TV presenter went on: “Just watching that reminds me of the last conversation I had with Derek, it was at the Christmas party after Kate came out of I’m A Celeb, and she was off being amazing with everybody.

“I just stood with Derek for ages. I’ve spoken to Kate about parenting issues in the past because I'm a single mum and, you know, occasionally you hit a brick wall and just think, ‘I don't know what to do here’, and so she said to talk to Derek.

“That’s the thing, everyone is saying, and Kate said it yesterday, his love for his children… he gave me all this amazing advice.

“I won’t go into it but he said there’s this thing that you can do from a psychotherapist point of you to help you be a better parent and it just brings back, in his heart, he's actually just a family man.”

Ravir continued: “And as Kate said, the children are so resilient because he filled them up with so much love before this awful moment that they didn't know was round the corner.

“It just makes me feel like, ‘Gosh, that was the last time I spoke to him,’ about him being an amazing parent, it was his central thrust from life and still is.”