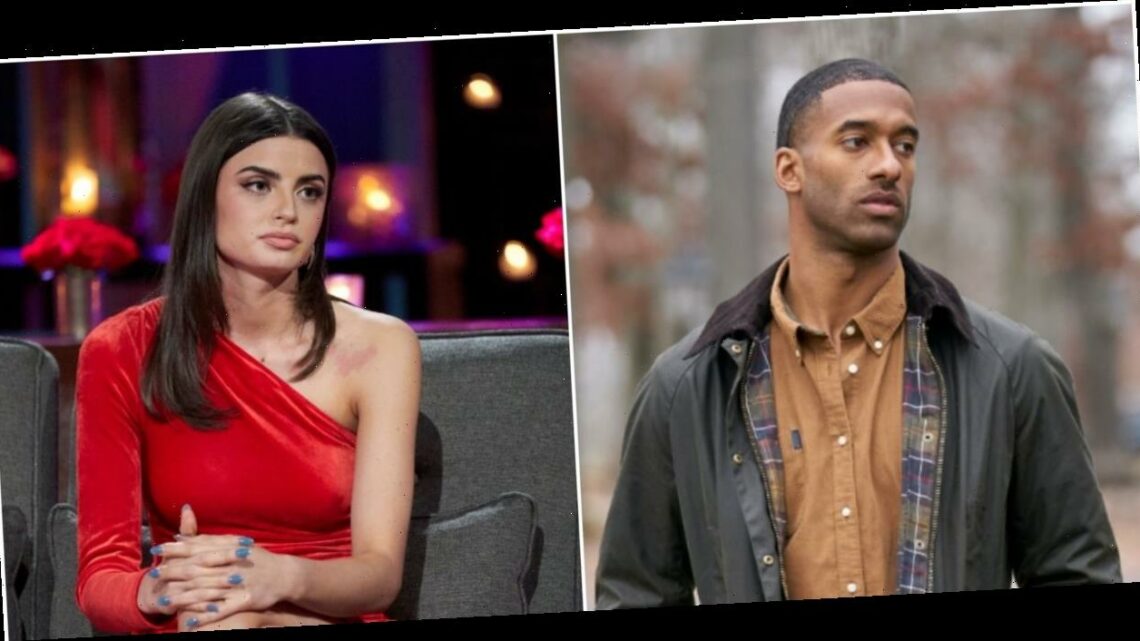 Matt James ended his season of The Bachelor in a relationship with Rachael Kirkconnell, but things quickly unraveled for the couple after Rachael’s past racist actions were exposed on social media. Photos of Rachael attending an antebellum-themed plantation party in 2018 surfaced, causing both massive controversy within the franchise, and irreparable damage to Matt and Rachael’s relationship.

Matt opened up about the split during a conversation with After the Final Rose host Emmanuel Acho, saying he initially “tried to be there” for Rachael when posts about her hit social media. “You hear things that are heartbreaking and you just pray they’re not true,” he said. “And when you find out that they are it just makes you question everything.”

Matt said he realized he “wasn’t okay,” and “Rachael might not understand what it means to be Black in America.” He also confirmed that he and Rachael are not together anymore, saying, “If you don’t understand that something like that is problematic in 2018, there’s a lot of me that you won’t understand. It’s as simple as that.”

After Matt’s conversation, Rachael told Emmanuel she was initially shocked when he called her to break things off, saying “I was very blindsided. But once that initial reaction went away, I thought about how strong I thought our relationship was, so for him to end things, he must have been very, very hurt by everything.” She added that she still loves Matt and “always will.”

Matt and Rachael then had a chance to sit down together for the first time since their breakup, with Rachael breaking the silence by saying:

Matt listened to Rachael before replying to a question from Emmanuel about how he feels now: “It’s heartbreaking and it’s devastating. It’s just disappointing.” Emmanuel then pointed out “there’s so much more on your heart [Matt], I can see it in your eyes. What else do you want to share with her?”

In response, Matt explained, “The most disappointing thing for me was having to explain to you why what I saw was problematic and why I was so upset.” He added that when he questioned the relationship, “it was in the context of you not fully understanding my Blackness and what it means to be a Black man in America, and what it would mean for our kids when I saw those things that were floating around the internet.” Ultimately, Matt said they “can’t be in a relationship” because the work Rachael needs to do has to be done alone.

In response, Rachael said she doesn’t “see anyone else out there for me” which prompted Emmanuel to ask if the door is open for reconciliation. And while Matt did say, “The feelings that I had for you don’t go away overnight” he also said he doesn’t want to be responsible for Rachael’s tears because “the work and the reconciliation that needs to be done is work I can’t do for you.”

Emmanuel followed up by asking Rachael what she’d like to tell Matt if she never sees him again, and she said, “Since day one, all I want is for you to be happy and I just want what’s best for you and I am sorry. I just. I thank God for ever putting you in my life to begin with and I’ll always be thankful for you know everything that we shared in the time that we did have together. “

Matt and Rachael then denied an opportunity to hug, with Matt simply saying, “I don’t know if it’ll ever not hurt hearing those things.

News of Rachael and Matt’s split initially came after Matt released a statement saying in part that he wanted to address the “troubling information that has come to light since we wrapped filming, including the incredibly disappointing photos of Rachael Kirkconnell and the interview between Rachel Lindsay and Chris Harrison.” (As a reminder, Chris defended Rachael’s racism in an interview with Rachel Lindsay, during which he spoke over her.)