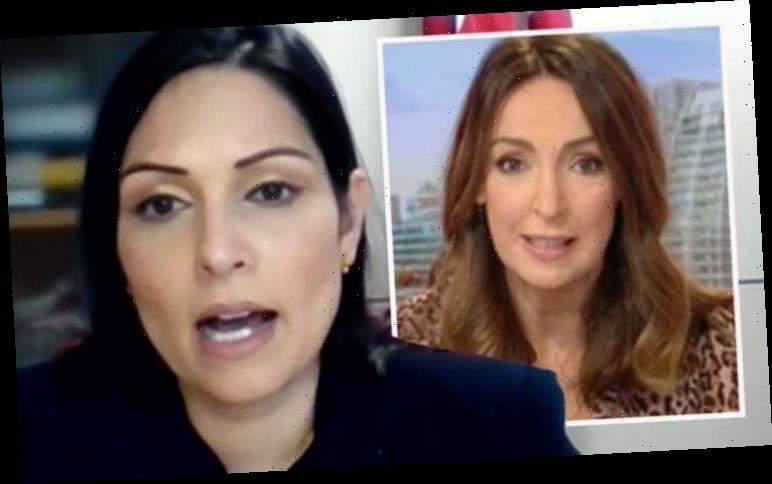 Ms Patel, 48, joined Nugent, 49, and her BBC Breakfast co-host Dan Walker, 44, on the show to talk about a number of topics, including the latest updates on the pandemic. However, Nugent wanted to start the interview by asking the Home Secretary about her reaction to the Bristol protests which have taken place over the last couple of days. When the Government minister failed to answer the questions as the presenter wanted, the BBC journalist jumped in to confront the politician as the discussion turned heated.

Hundreds of people have been taking to the streets in Bristol with regards to the Government’s new Police and Crime Bill, which will see changes made to how people can protest peacefully.

Such changes will include Police Chiefs having the authority to impose a start and finish time and set noise limits.

On Tuesday night, 14 arrests were made two days after the protests turned violent and disorderly in the city as police intervened over concerns for social distancing.

With lockdown restrictions being eased from Monday, Nugent asked the Home Secretary if she would be “happy” to see people protesting on issues they cared about.

The politician replied: “We live in an open society and democracy so the principle to protest and have your voice heard is absolutely crucial.” 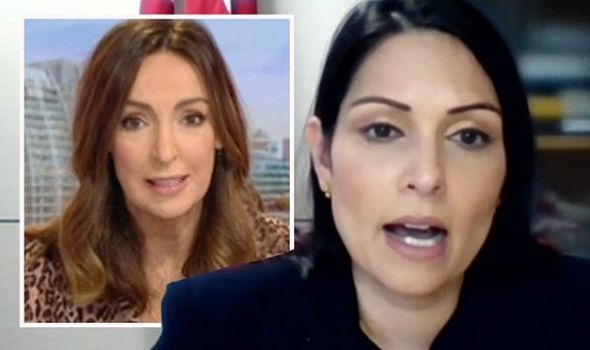 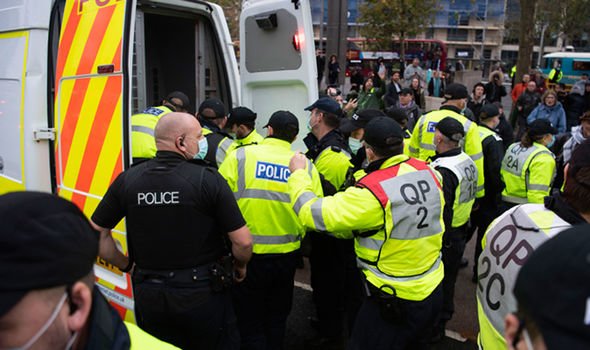 “But there is no acceptability at all for criminality and the type of violent scenes we have seen over recent evenings, including the most appealing assaults and criminal attacks on police officers,” Ms Patel continued.

“There is a fundamental difference between the two,” she added but then she was defeated as Nugent interjected.

Nugent told her guest: “Also a fundamental difference between what you’re talking about and what I’m talking about.

“I’m talking about people who want to protest peacefully,” the host said before reiterating her first question. 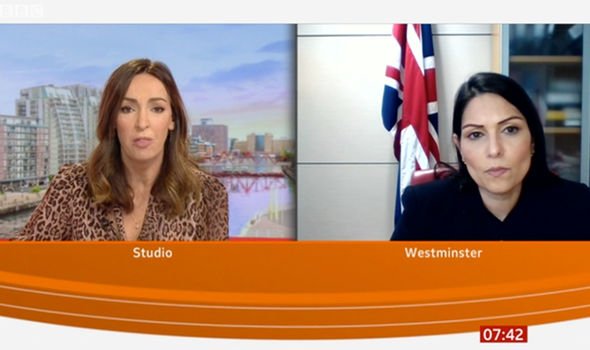 Ms Patel replied with a clearer angle, adding: “Well, peaceful protests are totally different from what we’ve seen in Bristol.

“We live in a democracy and we uphold the right to protest but as I would say, we are in a pandemic and I would urge everybody to continue to follow the rules and guidance.

“To continue to be incredibly contentious as the British public has been and we’ve seen that throughout the last 12 months.”

Nugent had to ask several of her questions a second time as the interview continued as she wasn’t satisfied with the politician’s answers.

After Ms Patel was asked about the new protest rules the Government was bringing into place with the new bill, the journalist interjected again as the politician gave her answer.

The presenter said: “The question was actually about how will the police decide when a demonstration becomes too noisy?”

With the atmosphere tense, the Home Secretary replied: “Well, I was about to come on to this. When it comes to noise, in particular, the police will make judgements and they’ll have guidance and frameworks around the impact noise has.

“Not on one individual but on communities and these are important changes that will be discussed and consulted upon as this bill passes through Parliament.”

Taking to Twitter, viewers commented on the interaction between the journalist and the Home Secretary, with one writing: “Priti Patel talks a lot and yet says nothing #BBCBreakfast.”

Another posted: “Sally doing a brilliant job interviewing @pritipatel on #BBCBreakfast. Calm, polite, to the point.”

Whilst a third commented: “Has @pritipatel ever answered a question in a straight way?

“She dances around everything, is it because she’s actually clueless (my guess), or that she doesn’t want to give the disappointing answer we already know is coming? Just spit it out! #BBCBreakfast,” they continued.

Why is Google not working?
World News