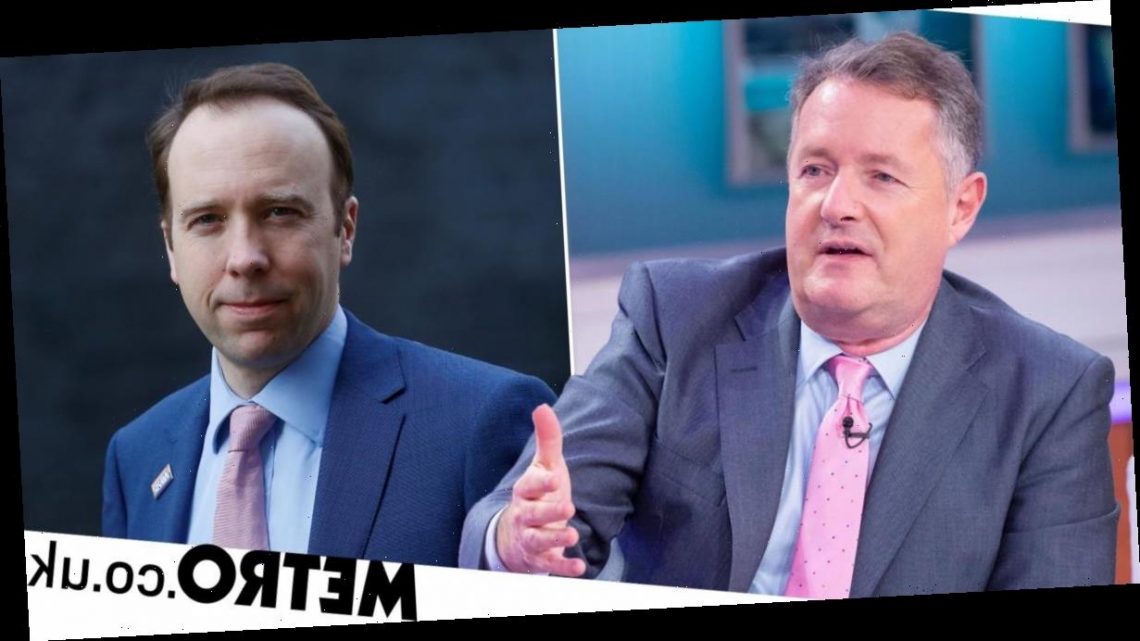 Piers Morgan has ‘celebrated’ the 50 day anniversary of the government’s Good Morning Britain boycott by taking a look back at their past interviews with Matt Hancock.

The 55-year-old has been vocal throughout the pandemic, and at the start of the coronavirus outbreak held the Health Secretary to account when he appeared on the show – forcing him to answer difficult questions.

However, over seven weeks ago, ministers started to refuse to come onto the programme, seeing Piers even pause his own show countless times to tune into BBC Breakfast for the news.

And now, the controversial journalist has reflected on old clips of when Mr Hancock appeared on the show at the start of the global crisis to mark 50 days of the boycott.

‘Happy anniversary,’ he said to his co-host Susanna Reid. ’50 days today the government launched its boycott.

‘One of the people we last saw was Matt Hancock, who is doing the rounds this morning – good morning Health Secretary!’

After showing footage of Prime Minister Boris Johnson running into a fridge when asked by one of the GMB reporters to chat with Piers and Susanna, the presenter said: ‘[Boris] said he would be a few seconds it has been seven months.’

He then turned his attention to the man of the moment Mr Hancock, adding: ‘We also know Matt Hancock believes in scrutiny and he believes in answering tough questions. He said this on 3 March…’

A clip of the Health Secretary then appeared of him stressing the importance of answering difficult questions, prompting Piers to quip: ‘Yes, it’s so important that’s why we haven’t spoken to them in 50 days.’

The snippet of the interview then ran into another segment from the same day of Mr Hancock saying it was fine to shake hands with other people.

‘We all ridiculed Boris Johnson for this ridiculous, “oh I shook everyone’s hand in a coronavirus hospital,” – because that’s what you do in the middle of a pandemic,’ Piers spat.

‘We know the Sage committee was telling the Prime Minister not to shake hands at the time.’

He continued: ‘On the 3 March Matt did answer a question on shaking hands in the middle of a health pandemic.

‘A week later they changed their minds as they did about everything, the testing, the quarantine…’

Are Becca Kufrin and Garrett Yrigoyen Still Together? The Former Bachelorette Updates Fans on Her Relationship Status