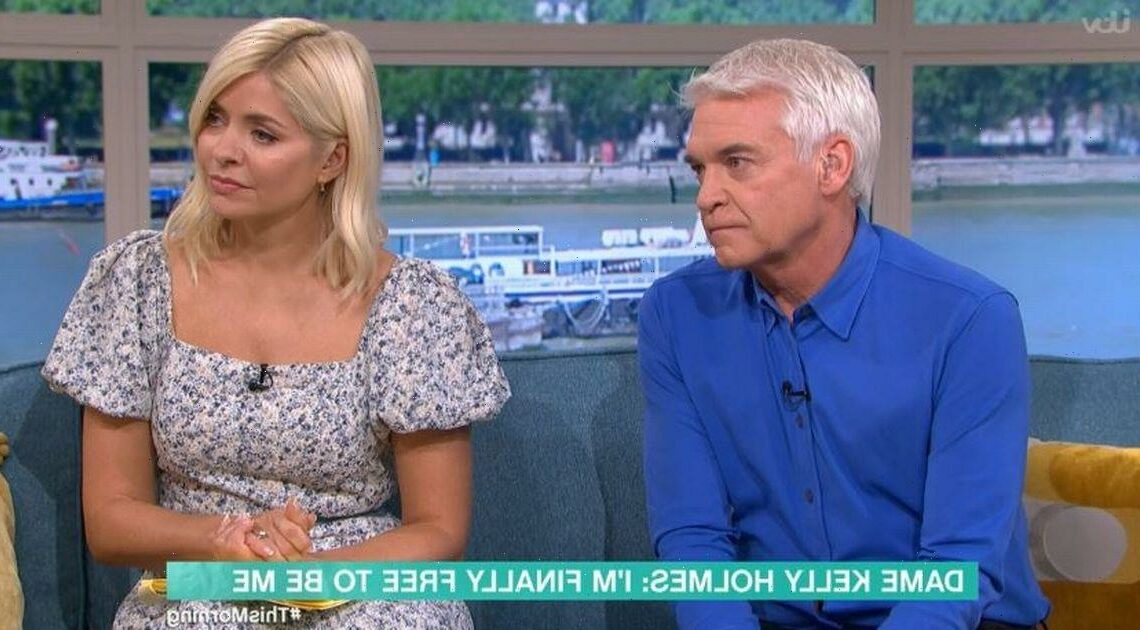 Phillip Schofield and Holly Willoughby became emotional on This Morning as Kelly Holmes spoke about her journey to come out as gay.

The 39-year-old Olympic Gold medallist appeared on the ITV morning show on Monday to talk about her new documentary, Kelly Holmes: The Real Me, after she came out as a gay woman over the weekend to the public.

Kelly said: “When it was announced [yesterday], I was still in a bubble, still at home and to go on social media, the reaction was amazing.

“But it still felt like it wasn’t the real world and then sitting here now, it feels like the real world and it’s really hard because I’ve been having interviews for absolutely years, but this is such a big step for me to be open and honest about the true me, that it’s still a bit scary.”

She added: “The documentary was a way of me articulating the fear I’ve had for so many years and to allow me to have a platform to hopefully educate and inform people of the complexities of maybe being gay as well. I’ve never said that before – that I’m a gay woman – publicly on TV.

“People don’t realise how hard it is to say that word. I’m not ashamed and I’ve been it since I was 18, but it’s really hard when you’re documenting different parts of your life that you’ve had to keep inside.”

Part of the reason Dame Kelly kept her sexuality a secret was because she was in the army and it was illegal to be gay in the army until 2000.

Dame Kelly revealed, “You were read the rules of homosexuality in the army – that it was illegal to be gay – and yet you can’t change who you are. So I grew up with that fear in the head because I absolutely loved being a soldier in the army. It was something that I really wanted to do.

“I was in there for nearly 10 years and yet I couldn’t express that. It was really difficult, because there was interrogation that happened. In the documentary, I explain it a lot and I speak to people that dealt with some shocking things, but for me personally, having raids, it was scary, humiliating, embarrassing."

She continued, “I’ve been so scared if anyone found out… for 34 years. It was only when I had a really bad breakdown in December 2020 that I knew I had to do something because it was so bad.”

Phillip, 60, and Holly, 41, were emotional and choked back their tears as Kelly spoke about how challenging it has been to not be able to be herself on her mental health.

“I became a self harmer, I didn’t want to be here frankly at some points in my life. I’ve been in a bad way a lot and in 2020 I had a really bad breakdown. I knew if I couldn’t release it, then I didn’t know what I was going to do,” she said as she became emotional.

Phillip's eyes filled with tears, as Kelly emotionally added: “So I had to do it.”

Phillip's eyes were bright red as he reflected on his own journey coming out on This Morning over two years ago.

“I think you wrote on Instagram that you were scared and I wrote back and said 'don’t be scared because it’ll be OK',” Phillip managed to say before he paused from the rising emotion.

“Oh, you two,” Holly said as she squeezed Phillips hand, while he shed a few tears, before he choked out: “How do you feel now?”

“I am relieved to finally do it, but it’s hard to unravel everything, but I know the relief will come gradually and the responses are really helping me.”

“It’s releasing myself to live my life and I honestly don’t think I’ve ever been happy, so I hope I can be now,” she beamed.

Kelly admitted the realisation came throughout the pandemic when she was suffering from covid and after her mum tragically passed away from melanoma.

She revealed that she wanted to share the news publicly about her sexuality as she thought: “All my friends and family would be standing at my funeral saying wasn’t it a shame that she couldn’t be her.”

Phillip nodded with understanding, as he bit his lip to stop the tears from falling down his face, while Holly listened intently.

“I felt that was my right and I just needed to find a way to do it and the one call I did to a brigadier and I said ‘what would happen if I come out?’ and he said ‘nothing’ and that changed everything,” she continued, referencing her experiences in the army, where it was illegal for LGBTQ+ people to serve until 2000.

Phil turned to Holly and shared: “That’s a conversation I had with you, what’s going to happen.”

Holly told Kelly that she wishes her the happiness she hasn’t felt before as her eyes swam with tears, saying: “I know you said here you’ve never been happy and I hope you look forward to that happiness now and see it as a tangible thing.”

This Morning airs weekdays from 10am on ITV &ITV Hub

Stay up to date with all the latest on This Morning by signing up to OK!'s daily celebrity newsletter .

Free bets and offers: Get £30 bonus when you bet £5 on tennis, football, horse racing, cricket or golf with Parimatch | The Sun