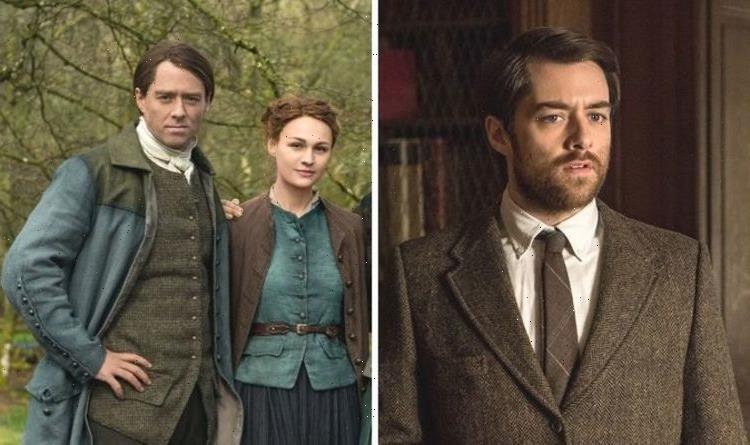 Viewers are eagerly awaiting the season six release of Starz’s acclaimed historical series, Outlander. Thankfully, Richard Rankin, who stars as Roger McKenzie, opened up about his character’s fate, especially as the American Revolutionary Wars approaches in the upcoming instalment.

One of the key moments for Roger McKenzie (played by Richard Rankin) and his wife Brianna McKenzie (Sophie Skelton) in season five was their failed attempts to return to the future.

The time-travelling couple and their son Jemmy had tried to go through the stones and despite their initial disappearance, they returned to Fraser’s Ridge.

In order to travel through time, Roger and Brianna had to think deeply about home, which for Brianna was the future and despite this, they were back where they started.

Although the couple had accepted the Ridge was clearly where they belonged, Rankin dropped a teaser about their fate in season six.

The actor stated: ”I think where we find Roger and Brianna in season six is more together than you’ve ever seen them.

“They’ve both embraced and accepted the 18th century as their home, in season five they tried and failed to go back to their time.

He continued: “But for Roger, I don’t think he had quite rea at it was more home to him than he thought.

“That set up a sort of foundation for Roger and Brianna to understand that they can be happy there.

“So then it becomes what is our purpose as a family, here settled where we’re going to spend the rest of our life, that’s quite an interesting position I think we find Roger in season six.”

The time-travelling began with Brianna’s mother, Claire Fraser (Caitriona Balfe) who accidentally discovered it in season one.

She was in Scotland during her honeymoon and through the stones, she was transported from 1945 to her exact location but in 1743.

After 20 years, Claire decided to return to the past and find Jamie, whereas Brianna stayed to finish her studies in Boston then eventually followed her mother.

Roger inherited his ability to time travel as the descendant of Geillis Duncan (Lotte Verbeek) and joined Brianna to reunite with her family.

Skelton also shared a major teaser about Brianna’s fate in season six and revealed: “She will use her architectural knowledge to build contraptions that will make life at the Ridge easier for everyone.”

With the Mackenzie family accepting their fate and properly settling down at the Ridge it’s yet to be discovered why their attempt didn’t work.

This was seen when Claire focused on Jamie and honed in on her love for him, after the 20-year separation, which worked.

Brianna had previously shared how when she was thinking of home, she was imagining Fraser’s Ridge rather than Boston in the 60s.

Despite this, fans will have to tune in to season six to see if the couple will make another attempt to return to the future or if they will stay in the past and take on the upcoming Revolutionary War.