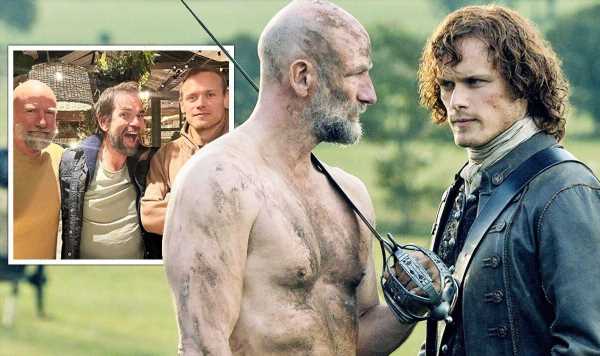 Outlander fans in meltdown as Sam Heughan reunites with co-stars

In addition to spending years together in front of the camera for the hit series Outlander, Sam Heughan has also remained good friends with his co-stars Graham McTavish and Duncan Lacroix behind the scenes. The stars recently got together for a fine dining experience, and their fans were thrilled to get a sneak peek at the reunion on Sam’s Instagram page.

Outlander enthusiasts were ecstatic to see Sam meeting up with Graham and Duncan away from their hit Starz drama.

Sam is best known for portraying rugged Highlander Jamie Fraser and has also been promoting his own alcohol brand, Sassenach Spirits.

Over the course of the series, both men became integral members of Jamie’s family, but have now sadly passed away.

Thankfully, the three co-stars have remained close outside their time on Outlander, and recently enjoyed a luxurious meal from Michelin-starred chef Tom Kitchin.

“Thanks to @tom_kitchin for the sublime food, all locally sourced with outstanding wine pairings…

“@sassenachspirits apple crumble soufflé with caramel sauce finished it (and us!) off nicely! SUPERB!”

His post also included a mouth-watering video of the group enjoying a selection of delicious high-end dishes, while Graham has also posted a snap of their reunion.

Sam and Graham have been celebrating the release of their new book, The Clanlands Almanac, which ties into their hit docu-series, Men In Kilts.

Their followers were thrilled to see the actors spending time together away from their work projects, especially considering Graham’s imminent return to Outlander next season.

@marydaneades replied: “I’ll have some of whatever they’re having! YUM!”

@michele_marie511 commented: “Damn you. I am SO jealous. I wanted to try that scallop dish when I was in Edinburgh.

“I didn’t get the chance. That looks AMAZING. I’m now completely hungry and salivating. Thanks.”

@anmartinezytarin wrote: “Looks like a very nice time together! I’ve just eaten but after seeing this I’m (very) hungry again.”

“Bless you all,” kirsty.sunshine added. “You deserve some excellent food amongst dear friends. Mr. Kitchin looks mighty happy too, bet you made his day.”

And laladenise0624 exclaimed: “Looks delicious!! So good to see (some of) the gang back together!!” (sic)

Sadly, Duncan isn’t confirmed to be returning to Outlander any time soon, although Graham will reprise his role in season seven.

Sam and his co-star Caitriona Balfe are currently still working on the next instalment, which is predicted to be released in the second half of next year.

Outlander seasons 1-6 are available on Starz in the USA and Lionsgate+ via Amazon Prime Video in the UK.

Guardians of the Galaxy Vet: Disney+ Holiday Special Is Both 'Goofy' and 'Heartfelt' (and Has a Big Reveal)