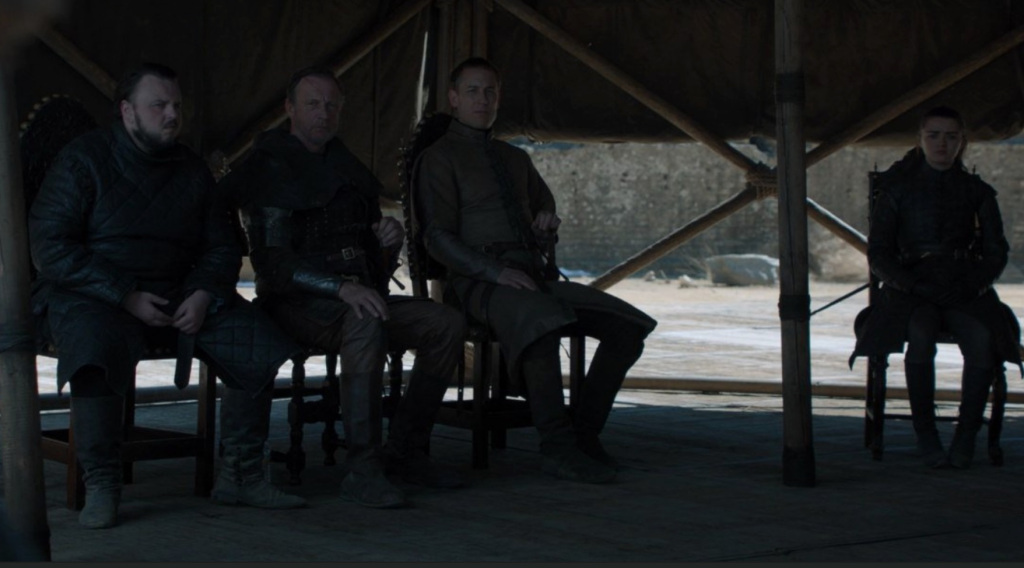 Oops, They Did It Again: HBO’s ‘Game Of Thrones’ Characters Caught With Liquid Anachronisms

Choosing a king or queen can be thirsty work, especially, apparently, for an inexperienced  statesman like Samwell Tarly. Not sure what Ser Davos’ excuse is – both king-makers were spotted by sharp-eyed Game of Thrones viewers with some very 21st Century plastic water bottles peeking out from behind their boots during a pivotal scene in GoT’s series finale Sunday night.

See screen grabs of the offending plastic above and below.

The offending water bottles, which sat on the floor, behind the boots of John Bradley’s Samwell Tarly and Liam Cunningham’s Ser Davos Seaworth as they and other poobahs gathered to decide the fates of Jon Snow and choose a post-Dany leader, sneaked their way into the show just two weeks after the much more obvious Starbucks-style coffee cup appeared on a table in front of Daenerys during The Last of the Starks episode.

The water bottles weren’t nearly as glaring a  blooper as the coffee blunder, but still drew plenty of internet chatter and freeze-frames.

Here’s a good image that’s been making the rounds:

And Ser Davos’s contribution to the blooper reel:

No word yet from HBO on the water seepage, but the plastic most likely will soon be as banished as Jon Snow, just like the offending coffee. Maybe HBO will even come up with a better joke apology than last time, when the following statement was released: “The latte that appeared in the episode was a mistake. Daenerys had ordered an herbal tea.”