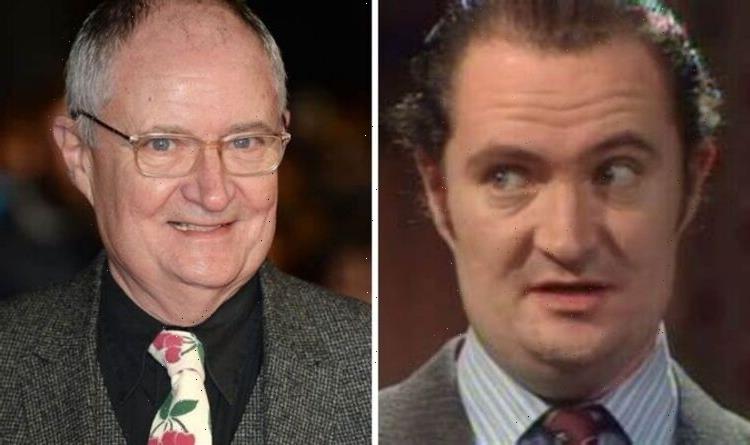 David Jason discusses stunts in Only Fools and Horses

Only Fools and Horses and Sir David Jason, who played Del Boy Trotter, became a household name for BBC fans during the 80s. The show followed brothers Del and Rodney Trotter (Nicholas Lyndhurst), who used to buy and sell anything they could get their hands on, with having a dream of one-day becoming millionaires. The pair and their gang of unlikely friends became an instant hit and soon saw guest stars flooding in to get a piece of the action. Jim Broadbent appeared in three episodes of the sitcom as bent copper Roy Slater and recently admitted he was shocked when he rewatched an episode and realised how “non-PC” it was.

The veteran actor admitted on That Gaby Roslin’s podcast he was shocked at the humour within the comedy and never realised how it may not have been politically correct.

Jim, who appeared in three episodes, recently watched an episode he featured in and said: “It was quite non-PC, some of it now. It’s sort of ‘oooh…’. It was 30 years ago.”

He watched the 1991 instalment titled The Class of ’62, in which Del Boy and Rodney attend a school reunion that turns out to be organised by Slater.

“It’s very special what John Sullivan did in putting it all together.

“I only went in for three episodes. I saw one the other day – the class reunion – and as it was on, I sort of covered by the sofa.

“Then I sat down and watched it right through. It was extraordinary.”

Jim also revealed he still gets recognised by fans of the sitcom, he explained: “It’s by far the most recognition I get on the street.”

Some viewers may know that David Jason wasn’t the first choice for writer John Sullivan, with Jim being one of the first names in mind for the wheeler-dealer character.

Speaking on the Graham Norton show, Jim explained why he turned the iconic role down.

He said: “Originally I was the second choice for Del Boy.

“The first choice was Enn Reitel, but he didn’t fancy it, and I couldn’t do it because I was doing a show in the West End.

“Luckily, David Jason was available, so my biggest contribution to British culture is not being available!”

Although he may have missed out on the leading role, Jim said his character is one that has been a favourite across all generations.

“It’s Only Fools and Horses more than anything else, and it goes across the generations – kids who weren’t even alive when we made it say Slater is their favourite.”

Speaking to Gold TV, David Jason recently opened up about his time on the show and described his character as “Mr Everybody”.

He said: “We can all relate to him, like him, we all think we can become millionaires, and that will be the solution to all our difficulties, but of course, it never works out.”

Speaking on reaching a younger audience years after the show ended, David said: “The characters are universal.

“Today, there are whole new generations of viewers watching repeats of Only Fools and Horses on UKTV’s Gold, and they’re all loving it!”

Only Fools and Horses is available to watch on BBC iPlayer.