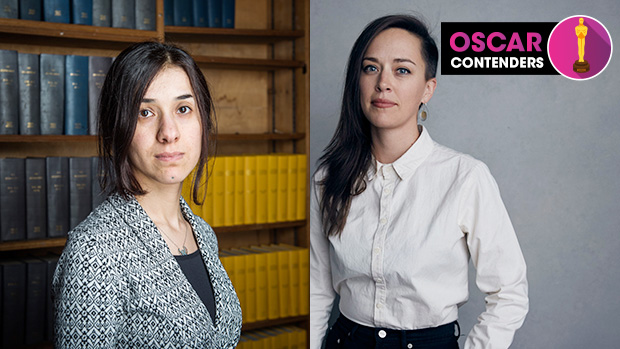 When director Alexandria Bombach, 32, began to spend time with Yazidi sex slave survivor, Nadia Murad, she realized that she wanted to tell the world about the burden that Nadia’s advocacy work placed on her slender, young shoulders.

Imagine living an ordinary peaceful life with your mother, 8 brothers and 2 sisters in a small town in Northern Iraqin 2014 and one day ISIS invades. Your mother and six brothers are marched to the edge of the village to be massacred immediately and you and a sister and nieces are captured, sold as sex slaves, then raped and beaten on a daily basis for a year.

That is what happened to now 25 year old Yazidi Nadia Murad, the subject of the new documentary, ‘On Her Shoulders,’ filmed and directed by Santa Fe native, Alexandria Bombach, 32. The horrors of what Nadia endured during her terrifying year of captivity, before she made a dangerous escape are almost too difficult to imagine, and Bombach steers away from having Nadia actually describe the specifics of what she, her sister and nieces endured, and that in fact was a key point of the film.

Instead, Alexandria focuses her film on Nadia’s non-stop work to get the world to recognize the desperate plight of the Yazidi people who have been forced to flee for their lives from their homes in Northern Iraq, including the at least 1,000 women and children who remain enslaved by ISIS. It is for Nadia’s advocacy efforts, ‘to end the use of sexual violence as a weapon of war,’ that she was awarded The Nobel Peace Prize this year, along with Dr. Denis Mukwege, a Congolese gynecologist, who has also campaigned against the use of rape in warfare.

“I think it was important to take a look at what this advocacy work was like and what burdens had been placed on Nadia’s shoulders,” Alexandria told Hollywoodlife.com in an EXCLUSIVE interview. “So much of what had been done to Nadia had been about her captivity, versus talking about her work now.”

Bombach followed Nadia for three months in 2016 as she relentlessly travelled from Germany, where she was treated for trauma, to New York City, where she spoke before the UN, to Ottawa, Canada where she met with cabinet members, to Greece, where hundreds of thousands of Yazidi’s are now living in refugee camps, with no idea about where and when they will be able to go and be able to live their lives in safety.

There are only about one million Yazidis in the entire world. They follow a monotheistic religion, which the ISIS Islamic extremists consider heresy and therefore deign its followers to be less than human. The ISIS militants had written guidelines about taking Yazidi women, as sex slaves, including girls who hadn’t even reached puberty, in which they justified having sexual relations with all of them.

Now, Murad is on a non-stop campaign to “push for justice for the Yazidis against ISIS members and also to rebuild Sinjar, (The main city of the Yazidi region in Iraq) making it safe, and it’s just been an endless amount of things that she’s trying to accomplish,” explains Bombach. Alexandria learned that Nadia had been nominated for the Nobel Peace Prize while she was editing the documentary but, she hopes that people don’t think that just because Murad received that prestigious award, it resolves any of the problems caused by ISIS committing genocide and rape.

“I’m always worried about people thinking that, “Oh, they’re ok now, she got The Nobel Peace Prize,” as if that was the answer to the problems. I just hope that people understand that there’s still so much to be done and a Nobel Peace Prize doesn’t change the actual work on the ground that needs to happen,” says Alexandria. “So hopefully it will open a lot more doors and get a lot more recognition for the work.”

Nadia continues to strenuously advocate for the still desperate Yazidi people, starting her own nadiasinitiative.org, to which she had donated her Nobel Prize winnings. She continues to bear the weight of the Yazidis pain and tragedy including her own painful personal losses, on her  shoulders, having to repeat over and over again, the stories of horror that happened to herself and her family.

“I think a huge part of this film is not necessarily to get people to understand how Nadia feels, but to translate what it felt like to be in those rooms with her during those interviews and testimonies and to witness,” she explains. Now, that she is finished with her work on ‘On Her Shoulders,’ Alexandria, is turning to a lighter subject — making a film about the Indigo Girls.

Previous to telling Nadia’s story of advocacy, Bombach spend months in Kabul, Afghanistan, following four Afghan photojournalists, for a documentary called, ‘Frame by Frame.’ So you can see why she might want to opt for some emotionally easier material now.

“There’s a lot of weight and responsibility that comes with telling a story like Nadia’s and it’s a lot of emotional energy to sustain over a long period of time… but I’m really honored to have had the opportunity to have told this story, as challenging as it was,” reflects Alexandria. “It’s definitely changed who I was, who I am at my very core as a human being and as a film maker.”

To see, ‘On Her Shoulders, ‘ go to www.onhershouldersfilm.com, for listings of where and when it is being shown.