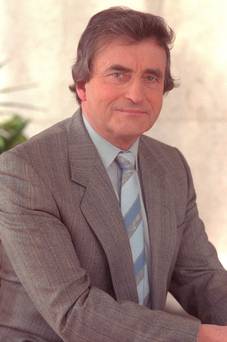 Although best known as the presenter of Mailbag, a 30-minute Saturday-night RTE television programme that dealt with readers’ letters, concerns and complaints, Arthur Murphy’s big ambition as a young man was to become a popular entertainer, a dream that was never fully realised.

Arthur – who died last Thursday, at the age of 90, after a short illness, – was given a recording contract by George Martin, head of Parlophone Records for Britain and Ireland in 1957, five years before the producer would go on to work with The Beatles and become part of recording history. But tours in the UK and the US and numerous television and radio appearances failed to ignite Murphy’s singing career.

He married Patricia Pacey and returned to Dublin to audition for the newly opened Telefis Eireann. He was hired, and became presenter of its first chat show, Visitor’s Book. But in the days when presenters were expected to be all-rounders, he also worked directing and producing news programmes and a light entertainment show, Just for You.

By 1962 he was restless to resume his singing career and signed with Oriole Records, changing his name to Mark Dwayne. He released two country-style ballads, Remember Me Huh and Little Bitty Heart in July of that year. They “got a lot of airplays on Radio Eireann, without anybody knowing who he really was”, said one report.

Neither propelled him into the charts, but he did get to work with Irish comedian Dave Allen in the Royal Albert Hall and do a show with Shirley Bassey. He also guested on Simon Dee’s Dee Time, then a major TV show; and Thank Your Lucky Stars, ITV’s answer to Top of the Pops.

He recorded an album of Irish rebel songs, A Nation Stirs, in 1971 – unfortunate timing, given the unfolding events in the North. But it did lead to an invitation from President Eamon de Valera to visit Aras an Uachtarain, where he was thanked for being such a good unofficial ambassador for his country.

Realising that he wasn’t destined for stardom, he joined Westward Television in the UK where he worked with Desmond Wilcox on a number of documentaries. He later became the BBC’s nightly local news anchor in Manchester. In 1974, he joined Radio City in Liverpool as their first breakfast-show presenter and in a three-year stint with the radio station presented Midday with Murphy and Down Town.

He and his wife Patricia had two sons, Shane and Mark, and decided to return to Ireland where he was engaged to present sponsored programmes on radio for customers like Coca-Cola and Johnson Wax.

Mailbag began as a 10-minute TV ”filler” during which listeners and viewers aired their complaints – sometimes trivial, sometimes raising national issues, like the continuing use of the Angelus by the station, or complaining about the growing promiscuity in the media. It was a TV version of a popular radio programme presented by John O’Donovan called Dear Sir or Madam.

First aired in 1982, it developed into a 30-minute Saturday night prime-time slot, and Murphy because a household name reading letters in a cut-glass accent while showing flashes of humour, even as he handled complaints about himself and his own programme.

“The letters came in, not just about RTE, but about everything under the sun,” he said in one interview. “There is usually a bunch of letters slagging me personally.” He enjoyed reading the “verbal brickbats” and once read out a letter inquiring what his relationship was to another high-profile RTE presenter, Mike Murphy.

“I believe Mailbag allows ordinary people around the country the opportunity to be heard,” he told the RTE Guide in an interview. “It affords a chance for people who enjoy writing but know they will never be published to see their work in public and for the viewers to see and hear what the rest of the country thinks.”

For a programme that was, at heart, mildly serious and gentle, it held on to its valued slot for 14 years until it was finally eased out in 1994.

Arthur Murphy ended his career working on the RTE Guide doing the ”billings” – the short synopsis of programmes on the schedule.

Murphy later teamed up with presenter Ray D’Arcy on Today FM to do Emailbag on D’Arcy’s morning show and moved back with him to RTE when the presenter jumped ship.

Arthur Murphy was born in south Dublin in 1929. He learned the piano and played church organ in his early years. He attended Trinity College Dublin, where he graduated with a BA and did the Hdip, getting his first job as a school teacher. He and his wife, Patricia – who passed away in April 2016 – lived for much of their lives in Loughlinstown and were parishioners at Rathmichael Parish Church, where they were very active members. He is survived by two sons, Shane and Mark.