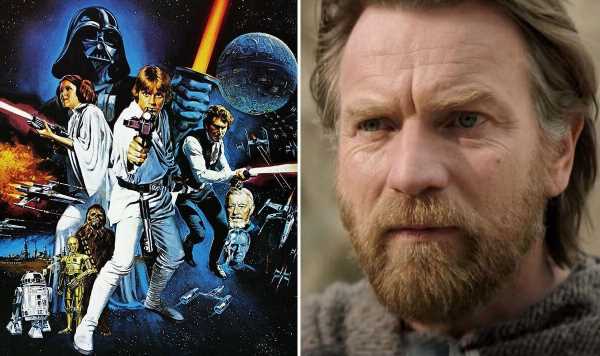 WARNING: SPOILERS AHEAD. After last week’s two-episode debut of Ewan McGregor’s six-part Obi-Wan Kenobi miniseries on Disney+, the third arrived today. The second concluded with the Jedi Master realising that Anakin Skywalker did not die after their duel on Mustafar, after he sliced off his legs and let him burn to death. Through the Force, he could sense his old Padawan, who has been ruling with the Emperor for the last decade.

Hayden Christensen’s face as Anakin was seen in a bacta tank, waking up to this disturbance in the Force. He’s been hunting Obi-Wan Kenobi for 10 years and now it’s time for them to reunite in battle.

Now both have finally faced off in episode 3, with the first sight of Darth Vader in his full suit in live-action since Rogue One back in 2016. And alongside the Anakin Skywalker star was a surprise return of a Star Wars original trilogy legend.

If you want to save on your Disney+ subscription, buying an annual plan is a no-brainer! At £79.90, you’ll save £15.98 compared to paying for your subscription with a rolling one-month contract. That’s the same as getting 12-months of Disney+ for the price of 10! And better yet, you’ll be shielded from any price rises for the entire year as you’ve paid in advance

Yes, James Earl Jones himself has returned to voice Darth Vader in his suit. The 91-year-old’s incredible boom was used in the original trilogy movies and his contribution was confirmed by episode 3’s credits.

It seems this was achieved thanks to the same AI technology used for Luke Skywalker’s younger voice in The Mandalorian and The Book of Boba Fett.

Also in the credits, as spotted by Screen Rant, is Respeecher, the company that worked on Luke’s voice in those other shows.

The technique takes lots of old recordings and puts together an AI model. This is also how Val Kilmer, who had throat cancer, was able to speak as Iceman in Top Gun 2.

Jones’ Vader sounded a bit elderly in Rogue One so this is a great way of recovering the same voice in the original trilogy.

Obi-Wan Kenobi is streaming on Disney+.