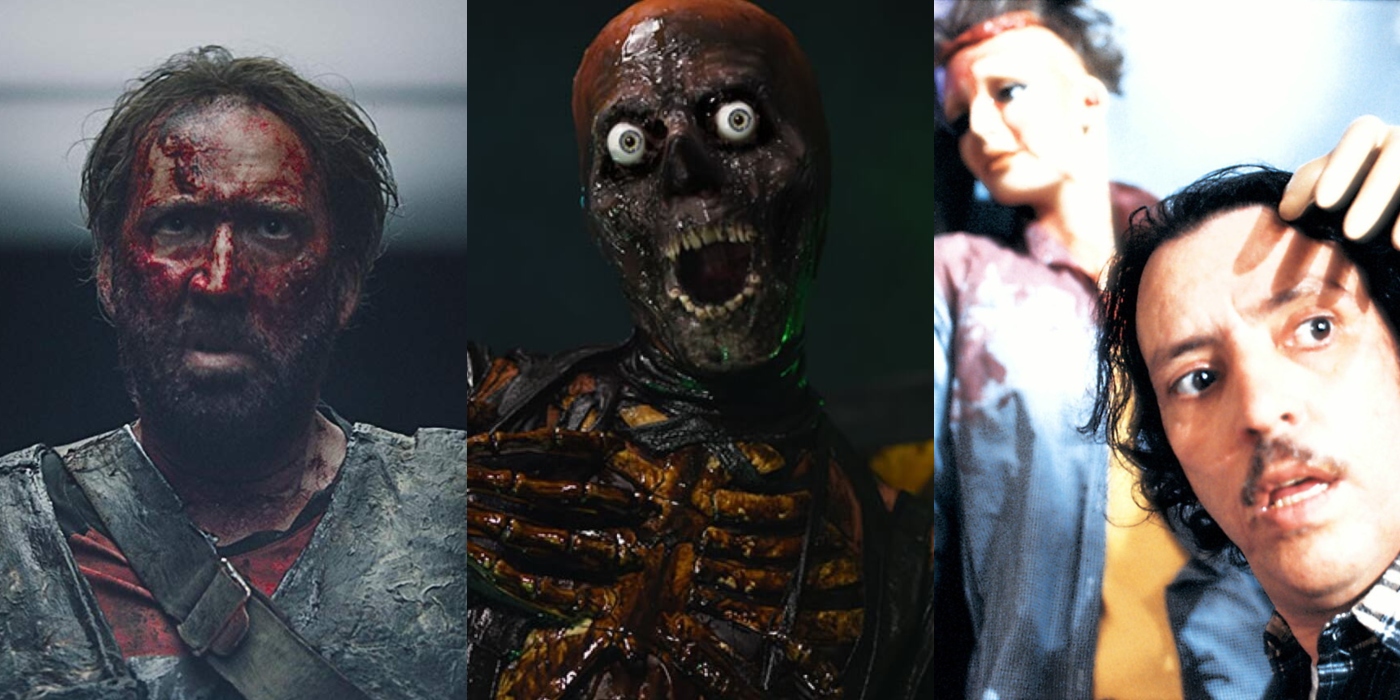 Now Scream This: 'Mandy', 'Maniac' and Other Amazing Horror Movies You Can Stream Right Now

(Welcome to Now Scream This, a column where horror experts Chris Evangelista and Matt Donato tell you what scary, spooky, and spine-tingling movies are streaming and where you can watch them.)

Matt: Apologies for the lack of theme this week – blame me. My stack of Christmas Horror screeners and awards season voting catch-up has grown into an untamable beast filling half my apartment. This week you’re getting a selection of favorites, fresh hits, and forgotten films done dirty by the vast influx of VOD titles that bury last week’s releases despite overall quality. Plus, Chris and I are going to gift-wrap some seasonal treats next week, so expect a double-down on December streaming content. We’ll make up for it, don’t worry.

Chris: Matt and I are still recovering from Thanksgiving, so we’re giving you an old-fashioned, un-themed round-up of horror for this edition of Now Scream This. Themes are great, but sometimes it’s fun to just kick back and watch whatever the hell you want, restrictions be damned.

Matt: Maybe I was tripped up in my own hallucinogenic phase, but my immediate reaction to Mandy was “Crank meets Melancholia meets the Devil himself.” Complaints of a disjointed Act I as Nicolas Cage’s character Red loses everything he loves have been posted by those less enthused with Panos Cosmatos’ ragin’ revenge thriller. I understand, frankly. There’s a lot to take in as Red and lover Mandy (Andrea Riseborough) collide with cult maniac Jeremiah Sand (Linus Roache), their lives forever destroyed – but Mandy’s second half is a sensational work of genre artistry. From when Cage downs that bottle of bathroom vodka until the last cultist has been brutally slain, Cosmatos’ crimson hues and commitment to psychedelic, metal-as-fuck “demon” fighting is the best usage of Nicolas Cage in years. There are men with nothing to lose – which we’ve seen many times before – and then there’s Red in Mandy. Next-level vengeance of the trippiest, most affecting variety.

Chris: Mandy is one of the year’s best films. A mind-blowing acid-trip of a movie that has to seen to be believed.

Let Her Out
Now Streaming on Shudder

Matt: With the number of horror festivals I attend throughout the year, it’s inevitable that a likable film or two gets lost in the indie distribution shuffle. Cody Calahan’s Let Her Out is one such example, after grabbing my attention at 2016’s Toronto After Dark Film Festival only to go completely dark stateside. No massive PR campaign, an under-the-radar release model, which is a shame because there’s some gnarly body horror work in this psychologically damaging story of – well, read for yourself. Chances are none of you have even heard of this movie, so instead of me heaping on praise, here’s my reviewed synopsis which I’ll confirm is delivered upon 100%. If this synopsis of an engaging, female-led story of trauma, grief, and the blurriness in between grips your interest, don’t hesitate:

“Alanna LeVierge stars as Helen, a Canadian bike courier holding onto a dark past. Her mother – a sex worker impregnated through rape – unsuccessfully attempted to kill Helen, resulting in her own death and “newborn” Helen’s rescue. This still haunts a now adult Helen, and it’s only going to get worse. After an accident puts her in the hospital, a tumor is discovered with side-effects far beyond medical means. Helen finds herself suffering from hallucinations, dementia and memory lapses that lead to the discovery that she wasn’t alone in her mother’s womb – and her unborn sister wants the life she never had.”

Chris: No idea what this is, but it apparently has a “brutal transformation scene”, which immediately gets my interest.

Matt: Ever wonder what’d happen if zombies overran a Big Brother production? Dead Set only lasts five episodes – which makes it much less daunting of a Netflix binge than their typical ten-to-thirteen episode, hour-each original programs – and is exactly that. Sleazy showrunners and contestants far off the grid are the last ones to learn a zombie outbreak has ravaged Britain, not until death comes knocking at their (mostly) zombie-proof doors. You’ll recognize faces like Andy Nyman, Jaime Winstone, and Riz Ahmed, all playing their part in reality television satire during a time of apocalyptic dread. No contact to the outside world, “eviction night” now with a whole new meaning. Also, it’s a gory, gratuitous blast of self-aware broadcasting chaos.

Chris: Matt is going all-out this week on films I haven’t seen. But hey, Riz Ahmed!

Matt: Tony T. Datis’s French import The Mansion is one of those generic “isolated vacation gone bad” horror comedies until the last act. An eerie rental house, a New Years Eve party, hormones and intoxicants mixing inside jovial students – we’ve all heard this story before. Partygoers start dying one by one, a slasher villain emerges, and comedy remains a constant contrast to otherwise gruesome flavors of death. If I’m staying vague, it’s because The Mansion relies on expectancies being freed from chains and unmasked to be a zanier, more dangerous – psychologically and physically – back half than even hallucinogenic boar encounters can tease. If you’ve seen French horror flicks, you already understand how weird storytelling can become. This lesser-seen festival discovery is no different.

Chris: At this point, I think Matt is just making movies up to make me look bad. I’m onto you, mister.

The Return of the Living Dead
Now Streaming on Amazon Prime

Matt: Dan O’Bannon’s 1985 punk-rock zombie classic is my gold standard when it comes to horror comedies. Too many memorable moments to praise. Clu Gulager’s overstated ability to make matters increasingly worse while trying to cover up his contamination leak? Tarman screaming for brains? Linnea Quigley’s graveyard strip show while assorted “losers” dance around with road flares? Mark Venturini’s line delivery – while head-to-toe in chains and leather – of “You think this is a fuckin’ costume? This is a way of life!” James Karen – may he rest in peace – and Franks incineration scene while “Burn The Flames” sets a somber tone? The kick-your-face soundtrack, “damn the man” themes, nasty zombie defenses – there hasn’t been a genre comedy that rocks this hard since the ‘85. Hard stop.

Chris: Alright, here we go! A movie I’ve seen! Return of the Living Dead is an absolute hoot, full of gnarly special effects, goofy humor and James Karen stealing the show. They don’t make ‘em like this anymore.