Home » TV & Movies » ‘Not about the plane!’ GMB’s Hawkins slapped down by Wallace in angry Kabul withdrawal row 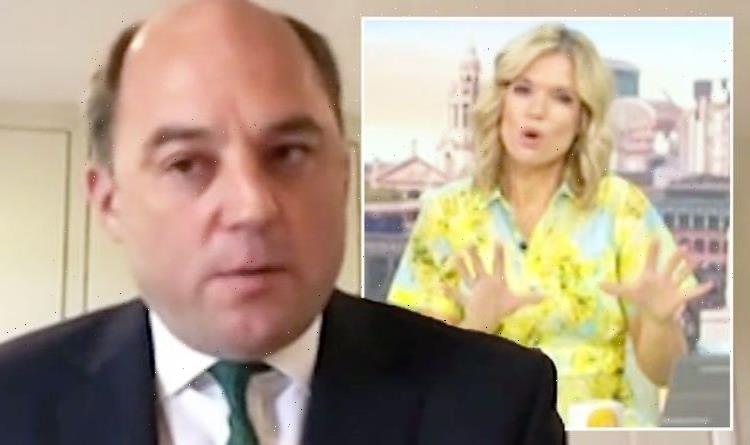 ‘Not about the plane!’ GMB’s Hawkins slapped down by Wallace in angry Kabul withdrawal row

Ben Wallace says he won't be prioritising animals over people

Early on in Tuesday’s Good Morning Britain, Ranvir Singh and Charlotte Hawkins heard from former Marine Commando and animal charity worker Pen Farthing live from Kabul, Afghanistan. Pen claimed to the ITV presenting duo he had been “cut off” by the Ministry of Defence after he’d appeared on the show on Monday to plea for help to get him, his team and the animals in his care out of the country. As a result, Charlotte was quick to put Pen’s situation to Defence Secretary Ben Wallace when he joined them via video link, prompting a stern reaction for the MP.

Pen had told Ranvir and Charlotte: “Today, we still do not have anything from the MOD [Ministry of Defence], in fact, they’ve actually cut me off.

“I did have like an emergency line that I could call if I were in trouble or I needed to report something and that has been cut so I’ve been literally left now on my own basically in enemy-held territory, so to speak.

“We’ve got a privately-funded plane, we can take 250 passengers out on that plane, 69 of that would obviously be myself and staff and we have a cargo hold.

“I’m not asking the MOD for a plane, I just need a call sign,” Pen pleaded as he reached out to the government once more.

Responding directly to Pen’s situation, Defence Secretary Wallace insisted a number of claims were “incorrect”, particularly when it came to ISAF numbers.

Wallace “strongly advised” Pen makes his way to the airport and takes the flight the government has already offered to him before pointing out he’d decided to stay with his team and the animals.

“But what he is saying is he’s got the plane, he isn’t going to leave -“ the GMB host continued but Wallace interjected: “It’s not about the plane., I’ve been very clear about that.”

Charlotte soldiered on: “He’s not going to leave his people, his staff that he believes are going to be at risk.

“He needs the paperwork to be able to get them to the airport to get them out and he would put the animals in the cargo, you can’t get people in there,” Charlotte insisted but she was soon cut off by Wallace.

“It’s not about the plane, Charlotte,” the MP snapped. “It’s about getting onto the airfield.

“So if he was to get to the airfield now and it would take roughly 24 hours for his other people to get through, I would have to push people out of the way to prioritise his people onto his aeroplane which is there, it is not about the plane.

DON’T MISS:
GMB fury as Marine Commando in tears after being ‘cut off’ in Kabul
Ranvir Singh apologises as she suffers wardrobe malfunction
Ben Wallace fumes at Ranvir Singh in angry rescue row ‘I understand!’

“These people aren’t queuing for places, they’re queuing for access, and it takes roughly 24 hours for those people to get through the process. So -“

This time it was Ranvir’s turn to interject to quiz the Defence Secretary as she weighed in: “He did say this morning, Mr Wallace, that he was prepared and ready.

“He’s an ex-Marine Commando, he knows how to be prepared in a crisis, and he says he is prepared to sit for three days with his team in the sweltering heat in those crowds and wait if only they had the paperwork that would allow him to believe there was a strong chance o them getting through.”

Wallace stood firm again: “He himself as a British passport holder back on the other side of the weekend has that in place.

“If he turns up today -“ Wallace continued before Ranvir jumped in again: “Yes, but he doesn’t want to turn his back on his star and you can understand that human connection.”

“I understand that,” Wallace added. “But I don’t want to turn my back on some people at even greater risk of their lives if they get pushed out the way.”

Ranvir appeared to understand the Defence Secretary’s argument as she hummed in agreement and commented: “It is extremely difficult.”