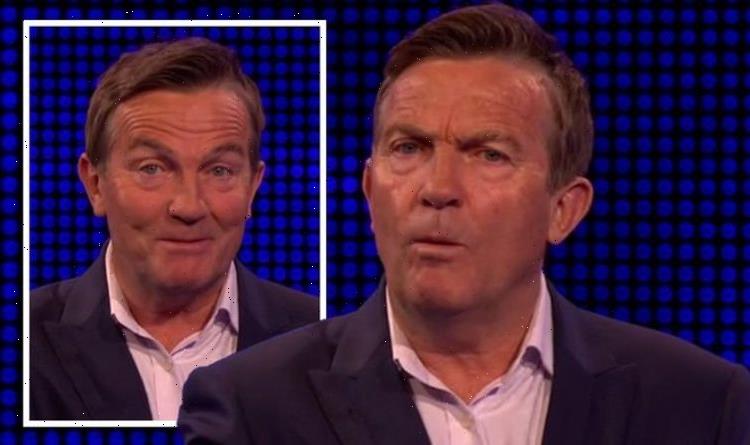 ‘No longer!’ The Chase host Bradley Walsh gives viewers an update on Chasers

Bradley Walsh welcomed four new players onto The Chase on Wednesday afternoon. Fiona, Omeed, Jill, and Michael were the contestants taking on Chaser Paul Sinha in a bid to win a cash prize. However, Paul didn’t make it easy for them and took out a member of the team before the final. As the quiz came to an end, the Chaser made a confession about his quizzing career, updating fans on his current global status.

Fiona, Jill, and Michael made it through to the Final Chase with a total prize fund of £12,000.

However, they were no match for Paul, who quickly beat them in the last round of the quiz show.

As the show drew to a close, Bradley made it clear he was sympathetic towards the team.

Offering up some words of encouragement, the presenter insisted the team shouldn’t be too hard on themselves.

Bradley remarked: “Got to say that was a very measured performance from the Chaser there, really measured indeed.

“Number 14 in the world by the way, that’s who you’re playing against,” he said.

However, Paul quickly corrected the host, confessing that this fact was no longer true.

“So, you may have noticed a slight smile come across my face when you asked that as I told myself, ‘Do not get this wrong again!’,” he exclaimed.

The Chaser also commented on a mistake he had made on a Sex and the City themed question earlier in the show.

Paul commented: “I’m not entirely sure I’ve ever got a single Sex and the City question right in all the times that I’ve been on The Chase.

“Despite the fact I watched the show, I like the show, I follow the show, I know who’s in it, I can never remember any of their names under pressure in a final chase. It’s bizarre,” he confessed.

After being corrected by Paul, Bradley encouraged viewers to “take advantage” of his new status in the quizzing world.

He said: “So, there you have it from the horse’s mouth himself, the Sinnerman tells us he’s no longer 14th in the world, he’s number 24.

“Could you take advantage of that and come and take some money off him?

“Come and have a go, you might be clever enough,” Bradley added, encouraging viewers to come on the show.

Succession is giving the corporate bro wardrobe an update