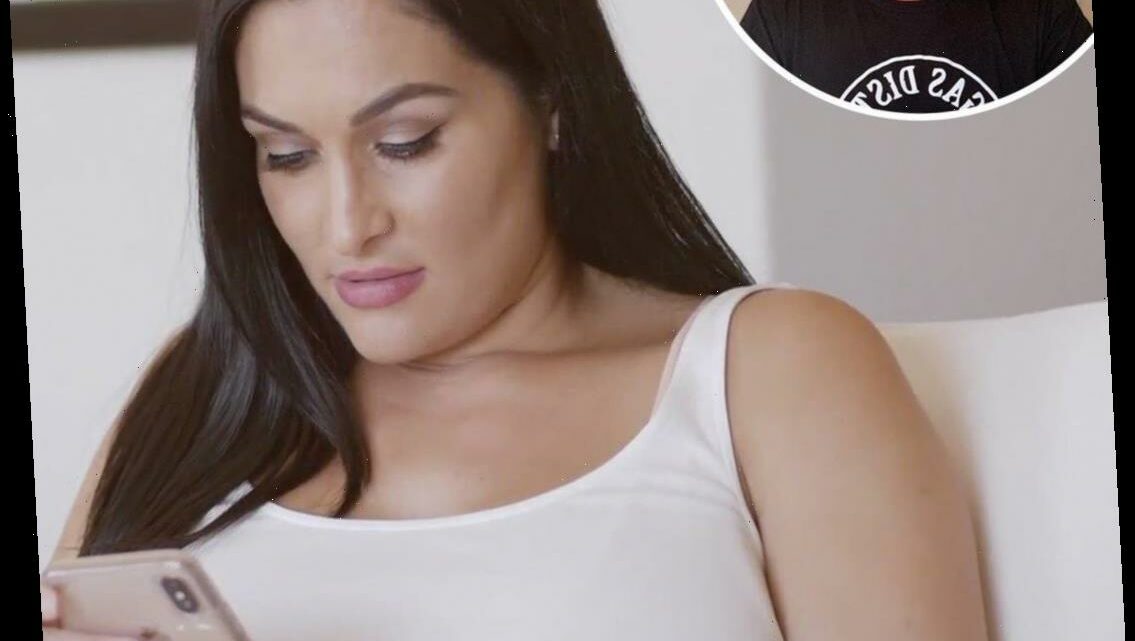 Nikki Bella and her brother JJ Garcia aren't on speaking terms, she reveals in this sneak peek of Thursday's all-new Total Bellas.

"You guys still haven't talked?" Brie Bella asks Nikki after mentioning their brother, who she only recently made up with herself.

The mom-to-be then opens up about the tiff that caused their estrangement, explaining in a confessional, "Ever since I reconnected with my father, JJ and I, we just don't see eye to eye on some things in life."

"The last time I saw him, we got into this massive fight about politics," Nikki continues. "And it's caused us not to speak. Like, it was the last straw."

As Total Bellas fans may recall, last season, Nikki and Brie decided to reunite with their distant father, Jon Garcia—something that their mother, Kathy Colace, didn't approve of at the time.

As Kathy put it on a season 5 episode, "Just because in the last, I don't know, three, four weeks, you guys have decided to have this relationship, how about sitting there and going, 'You know what, mom? Every time we were disappointed, you were there for us. And every time we went back and tried to rebuild a relationship, you were there for us.' What I hear is, 'You were always this bitch that didn't want us to be around dad.' That's not the case. Sometimes you need to give people credit for what they did do for a long time."

The twins ultimately made up with their mom, but apparently, that wasn't the case with JJ.

At least not for Nikki, anyway.

"He reached out to me a couple weeks ago and was like, 'We should talk,' and we did," Brie reveals in the sneak peek clip. "And our conversation, I'll say, [Daniel] Bryan was shocked because we got heated, but then we worked it out."

According to Brie, JJ wants to have a similar reconciliation with Nikki, "but I think he wants you to reach out," she tells her.

"I'm sorry, but why?" Nikki responds. "I don't understand what I did wrong in the situation except say how I felt about politics. And I got destroyed by him with words."

She continues, "I stopped responding. And he just kept saying mean things after mean things. Like terrible stuff. I couldn't even look at him and [his wife] Lauren to tell you the truth because I'm just disgusted."

Brie tries to reason with Nikki, saying, "It's family."

Camilla Luddington Responds to Criticism of Grey's On Set Masks

The Juiciest Reveals About Pete Davidson and Ariana Grande's Romance

Meghan Trainor Reveals Why She’s Not Into Pregnancy Sex

Find out if she has a change of heart on Thursday's all-new Total Bellas.