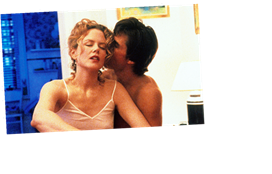 “When I went to work with Stanley Kubrick, he was like, ‘I’m going to want full frontal nudity’, and I was like, ‘Ahh, I don’t know,’” Kidman said. “So we came up with a great agreement, which was contractual. He would show me the scenes with the nudity before they made it into the film. Then I could feel completely safe. I didn’t say no to any of it. I’d wanted to make sure that it wasn’t going to be me standing there nude and everyone laughing at me. I was protected, so I got to explore a complicated marriage and the way in which Tom’s character is having those jealous images.”

Kidman added, “I would never think of not wanting the storytelling to be told properly. Having them say, ‘Once you’re ok with it, great, that’s it’ — what a fantastic place to be in as a woman…The way in which the contractual agreement that I have with a director allows me to do nudity and sex scenes because I feel safe. Sexuality is over here in a box, and we don’t deal with it. I’m happy to deal with it, but there needs to be a place where you can go, I’m not going to be exploited. Then I’ll go down the road with you. I love the relationship between a director and an actor. When it’s pure, it’s exquisite.”

Kubrick was infamous for his immersive filmmaking style and repetitive takes, but Kidman rebukes any claim that stepping into a film about a fraught marriage with her real husband had any real-life negative consequences. The actress called such claims “a fallacy” as both Kidman and Cruise “loved working with” Kubrick over the two-year production of “Eyes Wide Shut.”

“We had two kids and were living in a trailer on the lot primarily, making spaghetti because Stanley liked to eat with us sometimes,” Kidman said. “Stanley, he wasn’t torturous. He was arduous in that he would shoot a lot. But I’d sit on the floor of his office and talk, and we’d watch animal videos. He said animals were so much nicer than human beings. Though I do remember we were watching a wildlife thing where you saw the lion going after an antelope, and he could hardly watch it. Interesting, isn’t it?”

Kidman next stars in the lead role of HBO’s new limited series “The Undoing,” marking her return to the network after “Big Little Lies.” Head over to The New York Times Magazine’s website to read more from the actress’ latest interview.