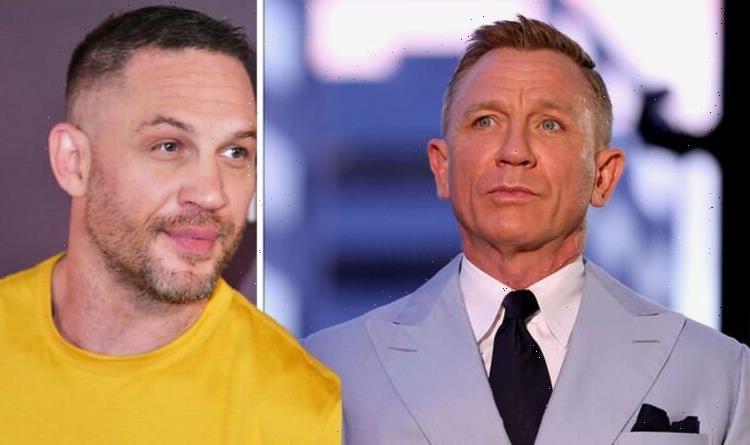 Daniel Craig dedicated 15 years to playing the iconic cinematic hero James Bond and has gladly stepped down from the role after his latest movie, No Time To Die. Since his exit, all eyes have been on Bond bosses over who will don the tuxedo next. The official announcement will likely hit later this year, but until then, the bookies are all fans have to go on.

Tom Hardy has had a good run in the ever-changing Bond odds, but his time at the top has now come to an end.

Instead, at the top of the Bond odds is Regé-Jean Page. The British hunk from Bridgerton currently has a staggering 9/4 odds on becoming the next 007 from Ladbrokes.

The young star would certainly be a welcome change from the traditional image of the international spy. But, despite his fantastic odds, he recently confessed he is “flattered” by the notion, but doesn’t see the rumours as anything serious.

He confessed: “I think there might be an element of cultural translation to be done here. If you’re a Brit, and you do something of any kind of renown that people regard well, then people start saying the ‘B’ word. It’s like a merit badge. You get the ‘B’ word merit badge. I’m very, very glad to have the badge. I’m glad to be in such wonderful company of people who have the badge. But it’s a badge.”

Ladbrokes’ Alex Apati said: “Plenty have led the way in the Bond betting over the years, but it’s Regé-Jean Page who has dominated the market for some time now, and punters seem to think he’ll be the name 007 chiefs turn to after Daniel Craig.”

Meanwhile, Hardy has had a bad time with the odds.

Hardy is a cultural icon at this point. Not only has he lapped up praise from fans and critics for appearing in various Christopher Nolan movies (including the Batman series) he has also had some great success in more commercial entities. He most recently made a name for himself in Morbius, as well as making his return in the BBC gangster show Peaky Blinders. But, in recent days, his odds on becoming the next Bond have dwindled to a meagre 8/1 with Ladbrokes, putting him in fourth place.

The star’s chances improved in 2020 after rumours hit the internet that he had already been cast as Bond behind the scenes.

However, he wouldn’t publicly comment on the topic. Instead, he said: “If I mention it, it’s gone. You know, there’s a saying amongst us in the fraternity of acting, and in the fellowship of my peer group, that if you talk about it you’re automatically out of the race. So I can’t possibly comment on that one.”

Ahead of him in the Bond race are some other great actors.

Henry Cavill is currently second place in the Bond odds. The former Superman actor has been a favourite for some time, and now has an impressive 4/1 from Ladbrokes.

Although he certainly looks the part, he has confessed he does not know if he truly is in the running or not.

“If [Bond bosses] Barbara [Broccoli] and Mike [G Wilson] were interested in that, I would absolutely jump at the opportunity. At this stage, it’s all up in the air. We’ll see what happens. But yes, I would love to play Bond, it would be very, very exciting,” The Witcher star recently confessed on The Graham Norton Show.

Just behind him is another heavy hitter in the acting world, however.

Aidan Turner is currently in third place for the Bond odds.

The Poldark star has an incredible 7/1 at the moment, and while he still has a long way to go until he hits the top spot, he has a great pedigree behind him.

On top of playing the aforementioned BBC hunk, he also played Kili in The Hobbit trilogy – the spin-off series of The Lord of the Rings.

In the meantime, Daniel Craig has offered whoever takes over from him some stark advice.

Craig said: “There’s a couple of things I’d say, but I mean, one is: don’t be s**t. I would say you’ve got to grab it and make it your own. I think that’s the way to go forward.”

Speaking about his own experiences as Bond, Craig added: “I mean, I just committed myself to it as much as I possibly could and tried to sort of elevate it as much as I could. I hope I’ve left it in a good place and I hope the next person can just make it fly. It’s an amazing franchise, I still think there’s a lot of stories to tell.”

James Bond No Time To Die is available on Amazon Prime Video.