Home » TV & Movies » Never Knew How Much We Missed Sister, Sister: Check Out the Stars Then & Now 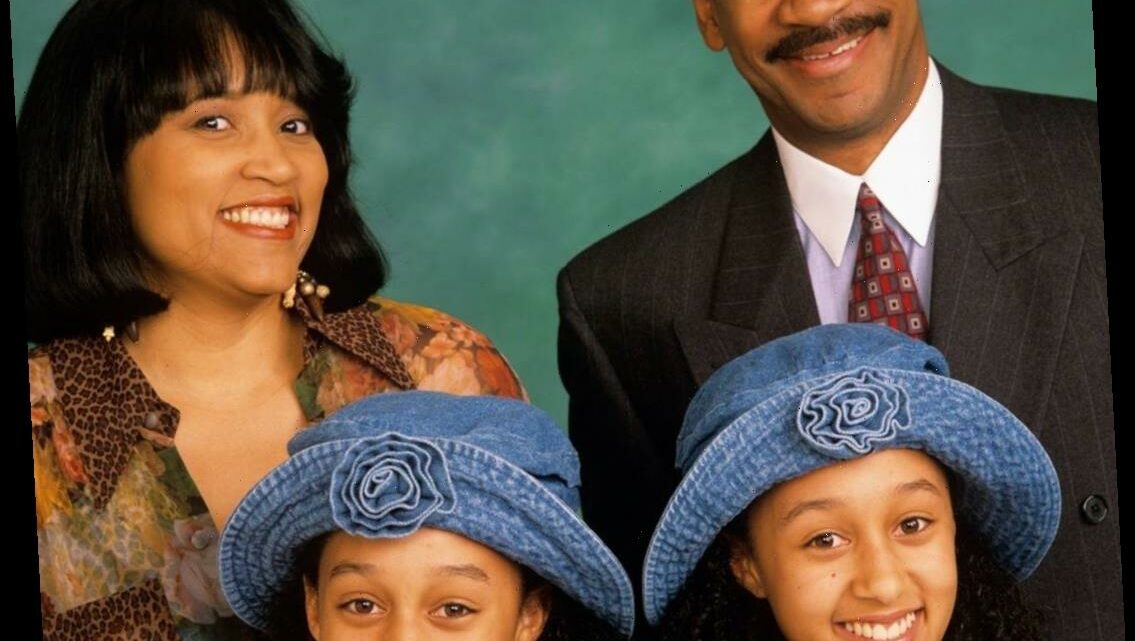 Never Knew How Much We Missed Sister, Sister: Check Out the Stars Then & Now

The iconic WB series recently hit Netflix and quickly entered the Top 10. Find out what twins Tia and Tamera Mowry and the rest of the cast have been up to since the show ended in 1999.

The '90s sitcom followed the identical twins, who were separated at birth, after they reunite in high school and their adoptive parents, played by Tim Reid and Jackée Harry, move in together. Shenanigans and sisterly bonding ensue, along with some romances and high school woes.

While it initially ran from 1994-99, Sister, Sister has experienced a surprise resurgence after hitting Netflix on September 1, quickly entering the streaming giant's Top 10 list.

"Wow! Wow! Wow! Never ever did I ever think that I would have 3 shows #trending on @netflix This is insane!!!" Tia wrote on Instagram of the show's success. "The #love that I'm receiving from all #3 shows have been so amazing! #sister #sister, #thegame and my most recent show #familyreunion…Thanks for allowing me into your homes for all these years!"

Tamera also commented on the show's surprising comeback, writing, "What a blessing to have inspired many at such a young age. Representation matters I'm so grateful and I am so excited for our generation to relive one of my fav jobs in history! And I'm ecstatic for the newer generation to discover this show, now on @netflix. I never thought in a million years #SisterSister would become an American classic."

So what is the cast of Sister, Sister up to now?

Whoopi Goldberg Reflects On Losing "Everything" After Political Remark

The Truth About Kyra Sedgwick and Kevin Bacon's 32-Year Marriage

Aside from starring in Tia & Tamera and the hit Disney Channel Original Movies Twitches with her twin sister, Tia found solo success with BET's The Game and her own Cooking Channel show, Tia Mowry at Home. Since 2019, she's starred in the Netflix sitcom Family Reunion.

And Tia recently landed a three-picture deal with Lifetime to star in and produce three holiday movies for their It's a Wonderful Lifetime slate beginning next year.

The 42-year-old has also released a cookbook, has her own YouTube channel and launched a line of vitamins and supplements, Anser.

In 2008, she married actor Cory Hardict, the two having met on the set of their film, Hollywood Horror. The couple has two children, son Cree, 9, and daughter Cairo, 2.

Outside of her projects with her sister, Tamera starred in the Lifetime Dr. Strong Medicine and found success as a TV host.

But after serving seven years as one of the panelists of The Real, Tamera announced she would be leaving the daytime talk show in July.

"I'm so proud of what all the ladies and I have accomplished there, including two well-deserved NAACP Image Awards and a Daytime Emmy," she said in a statement. "However, all good things must come to an end, and it's with a bittersweet smile that I announce that I am moving on from The Real."

In 2011, Tamera, 42, married former baseball player and Fox News correspondent Adam Housley, and they have two children, son Aden, 7, and daughter Ariah, 5. The family has their own YouTube channel, The Housley Life.

While the show was called Sister, Sister, it really was all about the mother, as the 227 star—who is the first and only Black woman to win an Emmy Award for Outstanding Supporting Actress in a Comedy Series—stole every scene she was in as Lisa, Tia's adoptive parent and fashion designer.

Harry would go on to enjoy recurring gigs on Everybody Hates Chris and Let's Stay Together before joining the main casts of The First Family in 2012 and Tyler Perry's The Paynes in 2018. She's also appeared on Girl Meets World, K.C. Undercover and A Black Lady Sketch Show.

The 64-year-old has also reunited with her on-screen daughter in several projects, including Lifetime's Christmas movie My Christmas Inn and Netflix's Family Reunion.

Since leaving his limo service business behind, Reid, 75, has become a fixture on the Christmas TV movie circuit, appearing in seasonal films for Hallmark Channel, Lifetime and OWN. He has also guest-starred on Grey's Anatomy, That '70s Show, Greenleaf and Dolly Parton's Heartstrings.

He went on to release six studio albums as a solo artist and continued to act, appearing in You've Got Served and Fat Albert. Since 2019, he's appeared on VH1's hit reality series Love & Hip Hop: Hollywood and he has produced several TV movies for BET.

In August 2020, Houston, 39, married 19-year-old Miya Dickey, with the duo sharing the same sentiment on their respective Instagram accounts.

We can't believe the day has finally come!" the statement read. "The day when the two of us were bonded together before Jehovah to become one. Jehovah has blessed us with a true happiness that is unmatched!"

Following his run as Bud on The Cosby Show, Richmond joined Sister, Sister in its fifth season as Jordan, Tamera's boyfriend.

The 42-year-old went on to appear in films such as Scream 3, National Lampoon's Van Wilder and Not Another Teen Movie, and also popped up in an episode of Psych.

Lee was introduced in season five as Tia's boyfriend, Tyreke, going on to become a series regular in the sixth and final season.

He would go on to guest star on a string of hit series, including Moesha, ER, Boston Public and Monk. In 2014, he landed a main role in Starz's Survivor's Remorse, which was produced by LeBron James and ran for three years. Most recently, he starred in the TV adaptation of The First Wives Club and the Netflix comedy Coffee & Kareem.

The twins' real-life little brother played three characters during his brief time on their show: Tia's cousin Tahj and T.J. Henderson, his character from fellow WB sitcom Smart Guy during a crossover episode, and an SAT tutor. The range!

In addition to starring in Smart Guy, Tahj was also known as Michelle Tanner's BFF Teddy on Full House. The 34-year-old would later go on to star in ABC Family's hit sitcom Baby Daddy and voice the character of Wade in Disney Channel's popular animated series Kim Possible.

Tahj dated Glee star Naya Rivera between 2000 and 2004 after meeting on the set of Smart Guy, and he penned a heartfelt tribute to her after she went missing while boating in July 2020 (she was later confirmed dead by authorities).

"We grew up together. We became adults together. We experienced so many firsts together," he wrote in an Instagram caption. "You were my first experience with everything; love, intimacy, heartbreak. We broke each other's hearts and then mended them back together… more than once," he continued. "I will never not think of you. No woman has ever measured up what you gave me or how you made me feel. I've never liked to admit it but I have never stopped loving you."

It's hard to find a hit show Lawson, who played mean girl Rhonda, didn't appear on in the '90s and early aughts. Her credits include Saved By the Bell: The New Class, Buffy the Vampire Slayer, The Steve Harvey Show and Dawson's Creek. Plus, she, once again, played a high school's reigning queen of mean in Save the Last Dance.

And the 41-year-old's streak of teen dramas continued with key supporting roles in The Vampire Diaries, Pretty Little Liars, Teen Wolf and The Secret Life of the American Teenager.

Since 2016, Lawson has starred on the OWN drama Queen Sugar, which is produced by Oprah Winfrey and Ava DuVernay.

Before she brought it as cheerleader Isis in the hit 2000 movie Bring It On, Union played Tia and Tamera's friend Vanessa in seasons four and five.

The ageless actress has been in a slew of movies since, among them The Brothers, Deliver Us From Eva, Bad Boys II, The Perfect Holiday, Cadillac Records, Think Like a Man, Top Five, Birth of a Nation, Girls Trip and Breaking In. She won an NAACP Image Award for her role as a driven journalist in the BET series Being Mary Jane and currently plays an LAPD detective (who is her same character from Bad Boys II) in Spectrum Originals' LA's Finest.

Union spent a season as a judge on America's Got Talent and upon her exit from the show alleged there was a "toxic culture" on set and she was subjected to racist and sexist remarks. However, an independent investigation determined that "no one associated with the show made any insensitive or derogatory remarks about Ms. Union's appearance," NBC and AGT producers shared on May 27, 2020.

"At the end of all this, my goal is real change—and not just on this show but for the larger parent company. It starts from the top down," Union told Variety before the investigation results were released. "My goal is to create the happiest, most high-functioning, inclusive, protected and healthy example of a workplace."

Union, 47, married now-retired NBA star Dwyane Wade in 2014 after almost six years of dating. They welcomed daughter Kaavia James via surrogate in 2018 and she is also stepmom to Wade's three kids from previous relationships.