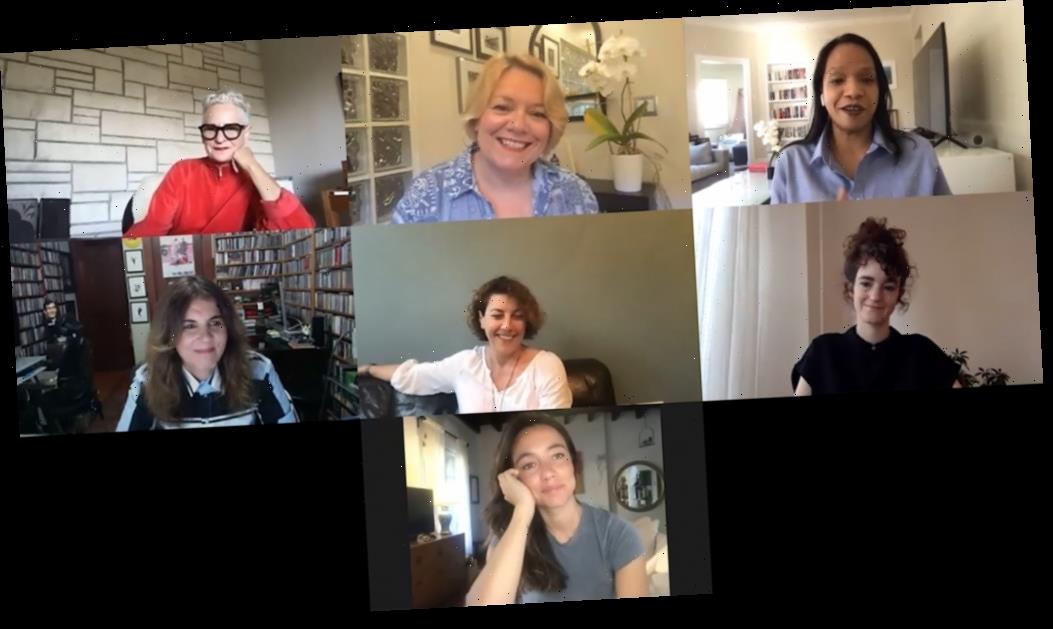 Langer spoke to the challenges of building personal relationships with the cheerleaders in her documentary. The film captures the cinematographer and her subjects’ growing comfort-level, but that didn’t necessarily make Langer’s job easier. In one particular scene, in which a student hurts herself performing a cheer sequence, she said, “The human in me wants to close my eyes and put the camera down and cross my fingers, but the DP [director of photography] in me is kind of dissociating and just doing your job. Because the more time you spend with people, of course the more invested you are in them.”

Building a new universe in “Space Force,” Mancini shared her biggest challenge was creating a military branch in a comedic setting. She tried reimagining an entire headquarter, a massive set that expanded into multiple sound stages. “We had materials like concrete and wood and glass and iron, ideal for military and a very masculine and strong environment,” she explained. “And a lot of grays — we tried to play around with all these elements we had.”

Eyrich shared juggling multiple costume design projects at once, for Ryan Murphy who she has been working with for over 15 years. For “Hollywood,” the designer looked for “explosions of color” to build up the glamor of post-war Hollywood, whereas in “Ratched,” she understood the costumes would be the strongest elements of color in a rather dull universe. “Ryan always has very precise ideas and tones and color palettes for every show, and it’s really all about the detail and working very closely with the production designer and the DPs, the photographer,” she said.

In casting Olivia Colman for “The Queen,” Gold said no one could understand Queen Elizabeth II on a personal level. But the show’s script challenged her to search for her own version of the world’s most famous female. “We’re not only casting the real queen but also casting what’s best for her to become, however many years later it is,” she explained. “In fact, Olivia doesn’t particularly look like the queen or Claire Foy (who plays a younger version of Elizabeth II), but it was more about this kind of essence and factoring in her spirit and feel of the character.”

Felder, the music supervisor for “Stranger Things,” said a big part of her job is finding and licensing music. Having a “very left, right-brained job,” she would spend days listening to music and reading contracts at once.

When asked about licensing a song like Don Henley’s “American Pie” or  Madonna’s “Material Girl” in Season 3’s soundtrack, Felder admitted her taste – heavily influenced by New York’s music scene from the ‘80s, helped the show’s music come together.

“I started out in a club in the East Village, and I worked at night, booking bands, throwing all these parties and met a lot of people in the industry,” she explained. “So that was my backdrop, especially for this project, because I wanted to keep my mind open to all kinds of music and just never limited to certain styles, and this is obviously important for the show because we needed music for all the characters, all the locations.”

Mollo, a picture editor of Netflix’s “Ozark,” also discussed the common misconceptions of her job. While she spends countless hours reviewing scripts and footages, many of her friends believe she receives a specific order for every cut she makes.

While editing may seem like a solo profession, Mollo believes it is, at its heart, a group effort. Especially in a field where opportunities for women are rare, she strives to open new doors by hiring female assistant editors. “Women are only 26% of the editors guild,” she said. “It’s really hard to make that jump from assistant editor, so I try to have my assistant in the room when we’re doing notes for producers, so the producers can know them, and [the assistants] can see how I work with the producer. It will help them make that transition. That’s really important.”

Watch the full conversation below.