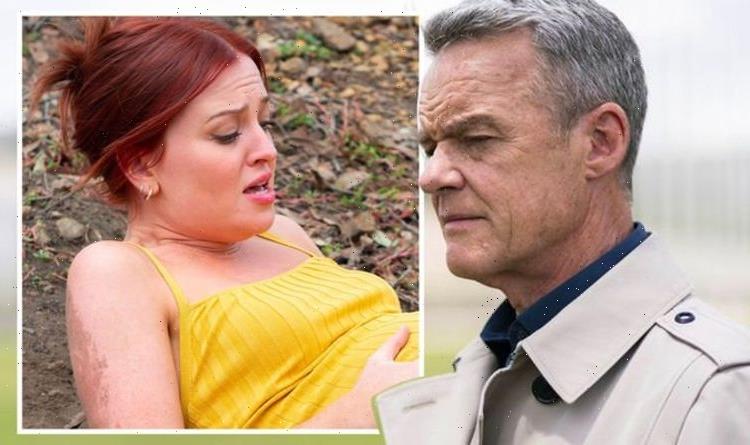 Neighbours: Pierce and Dipi are confronted over their affair

Paul (played by Stefan Dennis) and Nicolette (Charlotte Chimes) have never seen eye-to-eye since the latter first appeared on Neighbours last year. The Channel 5 soap stalwart wasn’t best pleased when he discovered his son, David Tanaka (Takaya Honda) and his husband Aaron Brennan (Matt Wilson), had agreed for Nicolette to be their surrogate. Things were going well until the expectant mother ended up in a relationship with Chloe Brennan (April Rose Pengilly). When the heavily pregnant character discovered her girlfriend had cheated on her with Leo Tanaka (Tim Kano), she suddenly disappeared and it seems Paul is the only one knows where she might be. If he finds her, could he kill her to ensure she doesn’t complicate things for his son any further?

In scenes airing next week, Paul will visit Canberra after a tip-off from a private investigator to where Nicolette is hiding.

Having followed the ghost trail, the stalwart is on his own as he tries to piece together where the mother of his granddaughter is.

The only other information the villain has is the expectant mother has been in contact with her friend and former character on the show, Audrey Hamilton (Zahra Newman).

Although she tries to lie to Paul, he reveals he has photographic evidence the friends have met up with each other.

Audrey tells Paul she knows of a park where Nicolette is known to go to for exercising and so Paul has another piece of the puzzle to put together.

It’s clear the stalwart is desperate to get his hands on his grandchild, hence why he needs to know where Nicolette is.

But if he finds the expectant mother and she fails to give him what he wants by returning to Ramsay Street, his devilish side could emerge.

The stalwart has been known for putting people’s lives in danger before but he could resort to murder to get rid of Nicolette which means she will never return.

In an exclusive interview with Express.co.uk, the actor who plays Paul, Stefan, explained his alter-ego could go to great lengths to achieve his goal.

Paul’s going to solve the problem

“Paul and Nicolette have never been on the same page at all. I don’t know what it is about Paul but he gets his bee in a bonnet about certain people,” Stefan explained.

“You do actually have to think what did Nicolette actually do to Paul to make him hate her but he’s never trusted her on anything.”

What transpires before Paul goes off to Canberra is he was the one who pushed her to leave Ramsay Street following the drama with Chloe.

“Paul’s had enough and Nicolette’s been messed around and with pregnancy brain as well she’s just been a mess.

“And making stupid decisions and Paul has had enough and he goes around and tells Nicolette ‘You’re not family and you’ll never be family’.”

“‘Don’t ever come back. Have the child, give it to Aaron and David and bugger off’,” the soap star admitted.

“Paul says that quite blunt in her absolute fragile state and so she goes off and has a panic attack and on the spur of the moment she takes off.

“Much to the surprise of everyone but Paul because of course he knows and that’s why he goes to track her down.

With this hint of “sorting the problem”, Paul could track Nicolette down and kill her to ensure no one knows he told her to leave.

As Nicolette would be out of the picture, the villain would be clear to return to Ramsay Street and acting as the dotting grandfather.

However, Nicolette’s mother, Jane Harris (Annie Jone), would be filled with worry about where her daughter is.

It would only be Jane who could cause a problem for Paul so will he derive some tale to ensure she stops the search for her daughter?

Or will one of his oldest and dearest friends be behind his downfall as his murderous ways come back to haunt him?