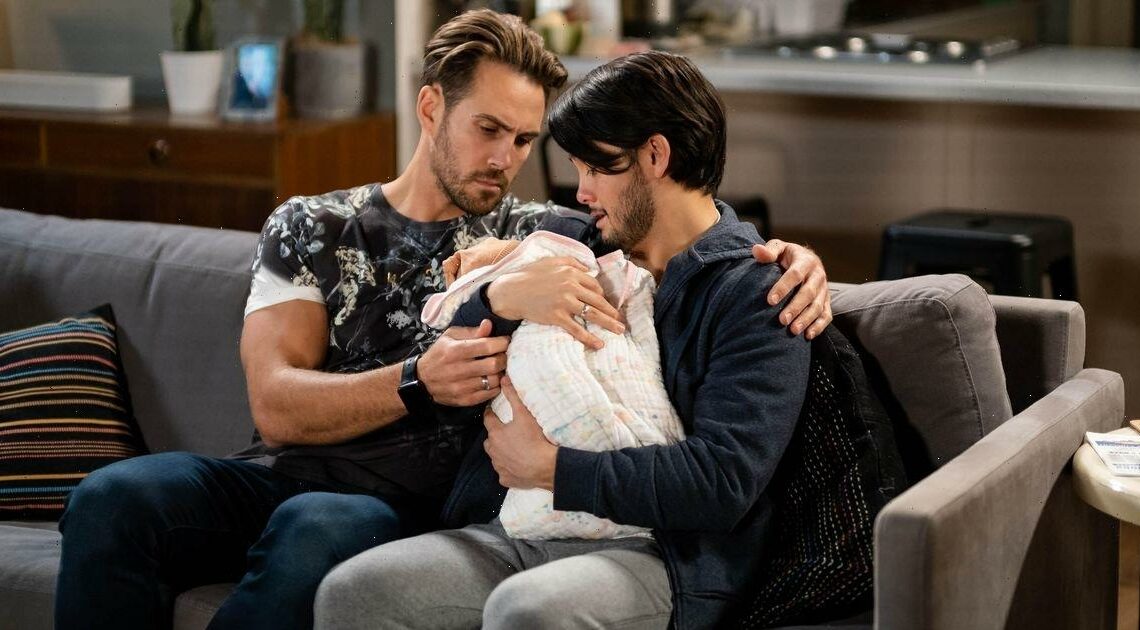 As though things couldn't get even more stressful for Neighbours couple Aaron Brennan and David Tanaka after the disappearance of their surrogate Nicolette – it turns out their baby might not even be related to them.

After Nicolette fled Ramsay Street after an argument with her girlfriend Chloe, it caused a huge stir in the neighbourhood as she was still pregnant with Aaron and David's baby.

Next week, Aaron and David are left completely floored when Paul turns up with baby Isla after weeks of being terrified they'd never meet their daughter.

Though they're frustrated with Paul for not informing them of his trip to Canberra to seek out Nicolette, the joy of finally being parents soon sinks in, and the couple throw themselves into fatherhood – while completely unaware the baby in their home isn't actually their daughter.

When Nicolette's mum Jane returns from Queensland, she's full of questions about her daughter, and stung with worry when nobody else seems to share her concerns.

Distraught, Jane breaks down in Paul's arms, completely unaware he's the one responsible for her crushing loss after warning Nicolette to stay away.

Meanwhile, Chloe is similarly devastated to learn Nicolette hasn't returned with the baby, and has only written apologetic letters for Aaron, David, and Jane.

And now Aaron actor Matt Wilson has opened up to Daily Star about the potential true identity of baby Isla.

"Without David or Aaron knowing what's going on, Paul decides to…" Matt began, before explaining: "Paul loves his family, he would do anything for his family.

"So he takes it upon himself to find out where Nicolette is, in the way that Paul does. That's hiring a private investigator, and paying to fix problems, really."

But could Paul have gone so far as to purchase a replacement baby?

"The PI does eventually manage to track Nicolette down," Matt explained. "Without David or Aaron knowing, he flies up to Canberra and meets up with her."

He added: "Something happens. There's some sort of exchange there, and some sort of deal where Paul gets a baby and returns to Ramsey Street without Nicolette. No Nicolette, just the baby – and no news from Nicolette either."

The star elaborated: "All Nicolette did was write a couple of letters, and they're quite bland, with poor excuses. It's really open-ended – there's not a lot of resolution in that.

"Why didn't she write to Chloe? Why hasn't she contacted her own mother, when the baby is something she cared so much about?"

He added: "Paul is avoiding the truth. He's giving different stories and clues to different people. So you might be able to get a few clues by watching Paul go around the streets, and in his interactions."

Matt explained that pandemic travel restrictions meant he didn't actually get to see the integral scenes filmed, and threw filming into chaos.

"Just in case, they said, 'Oh, we might not be able to go to Canberra – we don't know what this pandemic's going to do, so let's go and shoot those scenes'.

"Luckily we did, because it's been two years we haven't been able to travel out of state!"

And the storyline comes at a fated time for Matt, after he recently welcomed his first child with his wife Jessica.

The couple had managed to keep the pregnancy secret until Jessica gave birth in February this year, after they similarly shocked fans with a surprise wedding announcement in 2019.

"It's pretty funny timing," Matt admitted. "Every time there was a scene where we'd get the baby, it would need to be swaddled and they'd get me to do it because I knew how!

"I'd film a scene and they'd ask, 'How do you burp a baby? Would you have the bassinet here or would you have it here?'

"It was kind of like a consultant role as well!" he chuckled.

And asked whether it was difficult keeping the whole thing a secret, Matt said: "It was fine, we kind of enjoyed it! We were still in lockdown so we didn't have to see anyone, and it was easy enough to just not post about it.

"We're not the type of people to make a song and dance out of everything, even at our wedding."