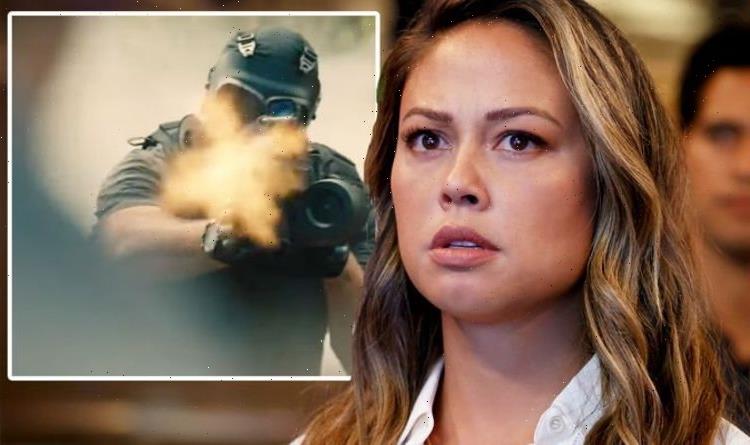 Jane Tennant (played by Vanessa Lachey) and her team made their debut on CBS last week as NCIS: Hawaii exploded onto screens. The no-nonsense leader of the team faces yet another big test from the get-go in episode two, titled Boom, as they’re tasked with tracking down a group of international thieves who use World War II explosives to tackle armoured trucks. However, it’s going to be far from an easy case as a first-look preview shows the deadly lengths the group will go to.

In the NCIS: Hawaii first-look, security agents Karl (Marcus Hanson) and Melissa (Fiona Rene) are shown patrolling in their armoured vehicle as the latter begins to vent about her family life at home.

“Doesn’t matter what time I wake up, that boy is in the hallway asking me questions like I memorised the encyclopedia in my sleep,” she says to Karl. “Four in the morning, a child in his dinosaur pyjamas staring at you.”

“Strong argument for living alone,” a dismissive Karl replies as Melissa continues: “You know, even when he frustrates me, gives me those wide eyes I fall all the way in love again.”

“How many routes are you on, Melissa?” Karl asks, clearly exasperated, as Melissa responds: “About 30 or so I guess.”

Keen to bring the chatter to a halt, Karl adds: “2,600 and counting for me, wanna know the most important lesson I learned? We don’t have to talk the entire time.”

But as a disgruntled Melissa goes to apologise, the van they’re in explodes, flipping and crashing over and over again.

Karl manages to pull himself from the wreck while a dizzy and dazed Melissa calls for back-up by issuing a mayday call.

As Karl tries to regain his composure, however, a group of masked, gun-wielding attackers approach and despite him holding his hands up, Karl is gunned down right in front of Melissa.

But the attackers mount the vehicle and wave their guns in her face, although another clip released by CBS confirms she makes it out alive to face questions from the NCIS team.

Lucy (Yasmine Al-Bustami) grills Melissa back at HQ about the ordeal, asking her to run through everything one more time.

Clearly shaken, Melissa protests before realising the police took her phone so she couldn’t get in touch with her family.

Melissa then tries to regain her composure as she relives the ordeal, telling Lucy: “I watched Karl get killed, thought they were going to kill me too so no, (I’m not okay).”

Lucy probes further to hear what happened after the attack as Melissa candidly replies: “Look, I don’t know what to tell you. Karl got out, was shot, I called ‘mayday, until they put a gun to my head and did what they told me.”

“And what was that?” Lucy asks as the agent replies: “Open the back, get on your knees, pray to God. I remember that part very clearly.”

With Lucy having met with Melissa and heard the threat this gang pose, will she and Tennant be able to take them down?

Or could Boom see the highly skilled thieves claim yet more lives as Tennant and the team struggle to put an end to their reign of terror?

Fans will have to wait until the episode debuts on Monday, moments after NCIS season 19 airs on the US network.

The pilot has already set the bar high for the new CBS drama, with approximately 6.3million tuning in for the episode.

NCIS: Hawaii continues Monday on CBS in the USA. A UK release date is yet to be announced.

THE DUCHESS OF CORNWALL: I wish a Maggie's centre was there for all