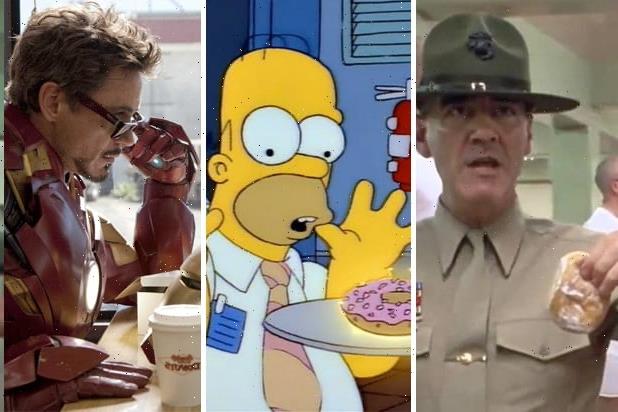 #NationalDonutDay: The Sweetest Donut Scenes in Movies and TV

Happy #NationalDonutDay, or as we like to call it, Friday 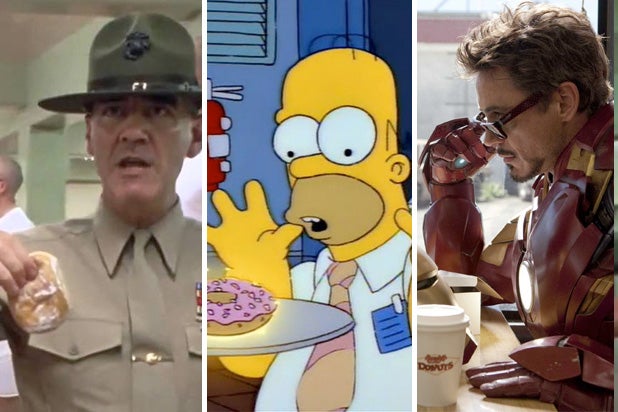 “Full Metal Jacket” (1987) RIP R. Lee Ermey. Only he could find a way to make the donut the ultimate motivational tool in this chilling scene from Stanley Kubrick’s war movie.

“Wayne’s World” (1992)Sadly, Stan Mikita’s donut shop is not a real place, but then it’d be hard to find a room where people are casually training to be in a James Bond movie when you open the door in real life.

“Boogie Nights” (1997)Paul Thomas Anderson stages this scene from “Boogie Nights” brilliantly. The camera peers through the glass of the donut shelves at Don Cheadle’s Buck Swope, teasing the colorful sweetness of the moment and the clerk’s attendant so that when bullets fly, the blood hitting the fan is all the more startling.

“Van Wilder” (2002)Given the (gulp) filling on these eclairs, we’ll take a donut over a croissant or the heartiest of bagels any day.

“Dodgeball: A True Underdog Story” (2004) “Just a little bite won’t hurt ya.” Now only if I had the same diet regimen as Ben Stiller’s character does…

“Transformers” (2007) Anyone else think Anthony Anderson was the best part of the first “Transformers?” This is an especially tasty way to prove you’re not guilty.

“Jack and Jill” (2011) Dunkaccino — possibly the most excruciating 30 seconds Al Pacino has ever put on film. Who could’ve imagined the guy who once played Michael Corleone would even jokingly change his first name to “Dunk” for this most eye-rolling of donut and coffee-themed puns.

“Iron Man 2” (2010) Randy’s Donuts is already an iconic landmark in L.A., but now it’s even the home of the birth of the Avengers? “Iron Man 2” maybe doesn’t hold up all that well, but this donut shop scene still hits the sweet spot.

“Zootopia” (2016)Among all the creative, memorable moments in Disney’s “Zootopia,” this delightful one of Officer Hopps chasing down a robber through the tiny mouse town stands out for Officer Hopps’ donut heroics.

“The Simpsons’ Treehouse of Horror IV” (1993)And as a TV bonus, if you still haven’t had enough donuts, how about “All the donuts in the world!”
Source: Read Full Article
CategoryTV & Movies
Tags#NationalDonutDay: Sweetes the