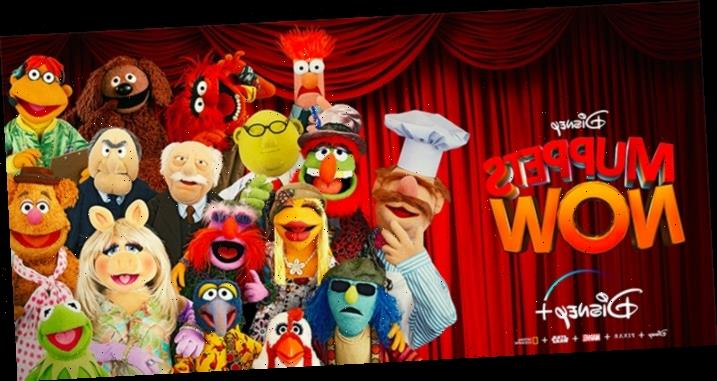 Despite successfully bringing back the Muppets on the big screen in 2011, Disney hasn’t really figured out how to make Jim Henson’s beloved characters make their triumphant return to the small screen. Their latest attempt to bring the Muppets to modern audiences comes in the form of Muppets Now, a new Disney+ series comprised of a variety of mini-shows featuring everyone’s favorite Muppet characters running what feels like their own YouTube channels, focusing on cooking, lifestyle, science experiments, mastering a skill, celebrity guests, and a zany game show.

The Muppets most recently tried their hand at a new TV show in 2015 with a short-lived mockumentary-style series on NBC that barely lasted a season. Then Disney+ was supposed to give them a new series called Muppets Live Another Day that would have picked up after the events of 1984’s Muppets Take Manhattan and followed the gang as they’re disbanded by Kermit, only to come back together following the mysterious disappearance of Rowlf. Muppets Now is nothing like either of those shows, and it’s a far cry from the sketch comedy they used to deliver on The Muppet Show or even Muppets Tonight.

The premise for Muppets Now, executive produced by Andrew Williams, Bill Barretta, and Sabrina Wind, is that Scooter is perpetually behind on delivering this new original series to Disney+, so each of the mini-shows within isn’t quite ready to be seen by an audience and has a makeshift style and off-the-cuff feel. Adding to that vibe is the fact that Muppets Now does have some improvisation between the Muppets and some of their human special guests.

Every episode is bookended by Scooter, appearing in video calls on his own computer screen as he realizes that he needs to upload the show immediately, whether it’s ready or not. Throughout the episode are little interstitial gags, usually featuring calls with other Muppets like Kermit the Frog, Gonzo, Fozzie Bear, Miss Piggy, Animal, and more. It serves as an easy way to move from one segment to the other with some semblance of a segue. There are also some amusing little details, such as file names on Scooter’s desktop like “Rough Cuts” next to “Rougher Cuts” and also “Smooth Cuts.” The app used to make calls through his computer is also called Rainbow Connector.

Once Scooter starts uploading each of the shows for every episode, it’s a whirlwind of energy that can be overwhelming and chaotic. That’s kind of the idea, but this feels like the most obnoxious the Muppets have ever been. Sometimes it works, other times it can be grating, but in order to get into the specifics, let’s break down the five different mini-shows from Muppets Now.

Modeled after the various lifestyle advice and makeover influencers out there, Miss Piggy hosts her own show that can’t quite seem to get the title right in the graphics department. With the help of Uncle Deadly as her assistant, Miss Piggy offers up helpful tips for your life, tries out new things with Taye Diggs, and chats with various Muppet acquaintances along with her new good friend Linda Cardellini.

Both of the celebrity guests seem like odd choices for this kind program, and neither brings anything particularly memorable to the table, though they’re each charming in their own way and are clearly having a good time. As expected, all the comedy comes from Piggy’s frequent mishaps that make her increasingly frustrated and disheveled, whether it’s from hot yoga, a slapping massage gone wrong, or a four-way conversation across the web that quickly descends into chaos.

Though the comedy antics of Miss Piggy feel right up her alley, and this is exactly the kind of show that she would host online, it feels half-baked and mostly falls flat. There are chuckleworthy moments here, and there, but nothing to write home about.

Hosted by Pepe the King Prawn, this is a game show where there aren’t really any rules to follow, and each of the games are always new and totally off-the-wall. There are two contestants, neither of which are recognizable names, and they’re both just along for the ride. Games played include a starting contest, answering seemingly random trivia questions that require no real knowledge, throwing socks into the mouth of a giant monster named Carol, and more. Whoever wins by the completely incalculable point totals gets to go on to the bonus round, which is equally nonsensical.

Pepe as a game show host doing whatever he wants to, and constantly ribbing Scooter as he tries to keeps the show from going off the rails, is good for some laughs. The contestants, whoever they are, seem to be adorably nervous but also genuinely excited to be doing anything with the Muppets. Normally, that’s how I would feel watching something with the Muppets unfold, but again, there’s something here that just feels a little consistently too haywire and undercooked.

Here, the Muppets take a crack at a scientific experiment show, taking cues from the likes of Mythbusters or Science Max on YouTube. Of course, it’s hosted by Dr. Bunsen Honeydew and his loyal assistant Beaker. They conduct plenty of experiments that actually deal with some real science, whether it’s talking about velocity when catapulting pizzas into a wall, or talking about how fire is created while seeing what will melt and what will burn.

If this sounds like dangerous stuff to show kids because it might give them bad ideas for experiments of their own in the backyard, they’re always preceded by a little disclaimer from Kermit and the new Muppet character, Joe the Legal Weasel, to tell kids not to try any of this at home. It’s this little inclusion that makes me think a couple of the shows in Muppets Now are supposed to be vaguely educational for kids in addition to being funny.

Speaking of teaching kids something, one of the segments is called Muppet Masters (not pictured above since an official image from this segment was not available). Walter, introduced in The Muppets in 2011, hosts the show that introduces a Muppets special skill. In this case, it’s Kermit the Frog, who provides some insight into photography. This appears to be a riff on the Masterclass web series featuring various entertainers teaching the equivalent of an online college course on filmmaking, screenwriting, comedy, etc.

In the first episode of Muppet Masters (which only appears once in the first four episodes provided to us by Disney+ for review), Walter tries to get Kermit to explain how to be a good photographer. As with the Muppet Labs Field Test show, there are little nuggets of real information, including a mention of the Rule of Thirds and the horizon line in photo composition. But Kermit is more interested in showing his real photo skill, which is actually photobombing, a gag that completely falls flat. This is easily the weakest show out of the entire batch in Muppets, and I’m wondering if it makes a return at all in the rest of the six episode series.

On the stronger side of Muppets Now, we have this talk show that brings in a special guest to be interviewed by a Muppet. This segment features a mix of real questions and improvisational bits, with guests including RuPaul and Aubrey Plaza.

RuPaul’s bit felt like it was the most candid and had some really charming bits when other Muppets would come in to talk to him. However, Plaza’s felt like it was more scripted, or at least had more moments that felt like they were trying to make comedy happen. It never feels forced to the point of feeling desperate, but this segment works better when it just allows for a real interview between one of the Muppets and the guest in questions. Honestly, I’m mostly interested in seeing how this goes when Fozzie gets to talk to Seth Rogen, which is apparently in one of the final two episodes that weren’t provided to us.

Finally, we have what is far and away the best mini-show of the bunch. This cooking show is inspired by countless other programs like it and features Swedish Chef either collaborating with or competing against a celebrity chef to create culinary magic. However, as we all know, Swedish Chef is a terrible cook, and that makes for some great comedy. The biggest laughs come from his Swedish gibberish, which is made all the more funny when the ingredients he says are listed in the spoof Swedish text.

This is another one of those shows in Muppets Now that feels like it’s vaguely education in that it does explain some details about how to cook an actual dish, and it does break down the ingredients. It’s not quite specific enough to follow like a recipe or a cooking tutorial, but it does have some enlightening qualities to it. Regardless of whether or not it wants to make you cook, it will undoubtedly make you laugh, and will probably have you speaking in Swedish gibberish for at least part of the day.

Overall, Muppets Now is mixed bag of Muppets comedy and modern entertainment sensibilities. Many of the problems with the series stem from the same issues common in YouTube entertainment. The premise makes the show feel half-baked, and the mini-shows themselves don’t feel like they tap enough into each of the characters’ strengths, and they feel tailor-made for short spurts of entertainment and lack any real substance.

Some characters feel like they’re left out in the wind when they could easily each have their own show. You mean to tell me that there’s not a mini-show that can utilize the wild, bombastic talents and stunts of Gonzo the Great? Rowlf doesn’t get his own show where he plays music and chats with some famous recording artists? Fozzie, the one true comedian out of the bunch, doesn’t get his own comedy competition series where he goes up against stand-up comics?

Though it’s a decent idea and a valiant effort to make the Muppets feel more relevant by giving them unscripted web shows (that still have a scripted feel), it doesn’t quite mesh with what people love about the spirit of the characters. This feels like it could easily entertain kids with flashy colors, boundless energy, and content designed for short attention spans, but it doesn’t have the same appeal that the classic Muppets used to have in either film or television. What the Muppets needs is someone who really gets them, the same kind of crew that brought back Looney Tunes Cartoons with a bang on HBO Max. Unfortunately, the only person who knows how to do that might be Jim Henson. And even the Walt Disney Company doesn’t have enough magic to make that happen.

Muppets Now begins arriving on Disney+ on July 31, and new episodes will arrive weekly after that.