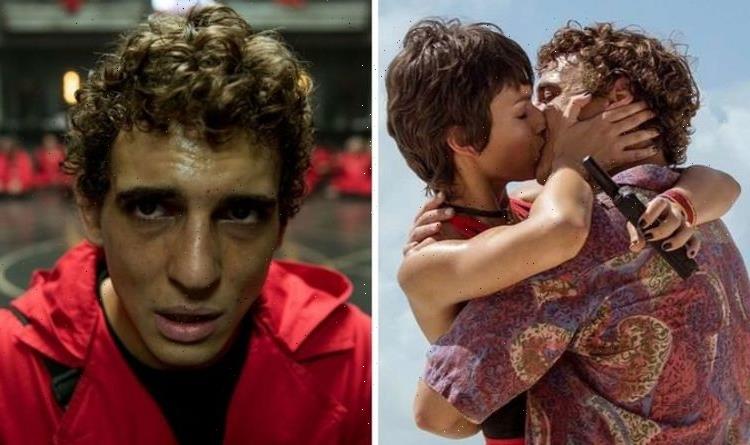 The first five episodes of Money Heist’s final instalment are hitting screens next month. With the Professor (played by Álvaro Morte) and his team backed into a corner, season five of the Spanish Netflix phenomenon could bring the story to a tragic conclusion.

Viewers think Rio (Miguel Herrán) could be falling to his death in the latest trailer for Money Heist season five.

The first half of the Spanish crime drama’s final instalment is finally hitting screens next month, and fans are expecting to say goodbye to some of their favourite characters.

So far, only Tokyo (Úrsula Corberó) seems to be safe as she remains the narrator of the events from an unknown location after the heist takes place.

Sadly, her current boyfriend Rio doesn’t have that same safety net, as demonstrated by an intense moment in the new promo.

Some perceptive fans are convinced the shot of Rio screaming through a hole in the wall could be one of his final scenes in the series.

One viewer recently took to Reddit to speculate a potential sequence between the two robbers in a climactic moment of season five.

User Present_Contact_2185 posted: “In the trailer you can see a scene where Rio hangs in a hole in the bank and is screaming.

“Maybe he is falling down this hole to another floor; it [could] be possible that he is either knocked out or dies in this scene.”

It’s unclear which episode exactly the tense sequence has been lifted from, but the show’s midseason finale could very well go out with another unexpected death.

The Professor’s crew is still mourning the loss of Nairobi (Alba Flores), but more robbers could have to bite the dust before the Bank of Spain heist is complete.

This theory also pointed to the fact that Tokyo’s late ex-boyfriend, portrayed by newcomer Miguel Ángel Silvestre, will play a major role in the final episodes.

“Then you will see a flashback of her and her ex boyfriend; you can also see the heist where her ex-boyfriend died.”

Silvestre appears very briefly in the new trailer in what is all but confirmed to be a flashback of Tokyo’s life before the Professor hired her for the show’s first heist.

His appearance in the new season could be foreshadowing that Tokyo will have to endure the death of another lover before she can make it out of the bank alive.

Additionally, some fans have even suggested Tokyo could be killed off, either instead of or alongside Rio.

“Yeah, I can see this happening,” another user agreed in the comments.

“Either Rio or Tokyo will probably die, or maybe both.

“There’s a reason they’re bringing her ex back via flashbacks. I think it would make more sense if something happens to Tokyo.”

Money Heist season five is gearing up to be the most action-packed entry to the series yet, and sadly that will inevitably mean more bloodshed before the final credits roll.