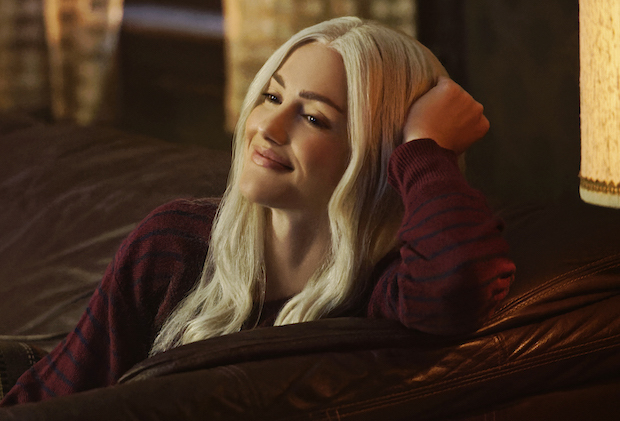 Minka Kelly Hails Titans' Grown-Up and Grittier Tone, Teases the Origin Story of Hawk and Dove… and the First Dove

Will hot-headed Kory incinerate young Rachel?! Titans fans will have to cool their heels a bit waiting for the outcome of that cliffhanger, as the DC Universe series this Friday takes a breather to check in on Hank/Hawk and Dawn/Dove, the latter of whom landed in a coma after being lobbed off a rooftop by the Nuclear Family in Episode 2.

So before Titans unfurls the final three episodes of its freshman run, this week we learn the story of “When Hank Met Dawn…” — and of the Dove that came before her — peppered with harrowing hints of Rachel’s current plight. Friday Night Lights alum Minka Kelly shared with TVLine a preview of the emotional reveals ahead.

TVLINE | First of all, how excited were you to get this role? Is playing a superhero or a supervillain on most actors’ bucket list?
I don’t know, is it? I didn’t expect it, but I’ve been just so pleasantly surprised just because [Titans is] its own version of a superhero show. To me, I think it sort of stands on its own, it’s not like any other one. It’s definitely more grown-up than the rest, and also somewhat more violent. We go a little deeper and darker and grittier, which I really love about it.

TVLINE | It’s definitely more adult. One of the things I love about this show is that when a character is obviously thinking, “What the f–k?!” they actually say, “What the f–k?!” I think Dawn even says it this week.
Yeah. Yeah. It always is a little startling like, “Oh, they said that?” They said it, yeah!

TVLINE | For your first appearance, in Episode 2, you had to dive in there and be badass from go. What sort of challenges did that present for you?
I loved it. I found that to be the most fun. I’m constantly begging the stunt coordinators to let me do everything.

TVLINE | “Let me do just a little bit more, please.”
I really am!  “Well, just let me try!” “Look what I can do, I think I can do that!” I really enjoy all of that stuff, though it was of course challenging.

TVLINE | We learn that Dawn has gymnastics, dance and jujitsu in her background. What do you do yourself to stay physical?
Now that you mention all that, definitely the most challenging thing for me was the ballet. The training for that was more challenging than any of the fighting, just because it was such a foreign way to use my body. Learning how to simultaneously be so strong and rigid, but light and delicate and effortless, is to me like rubbing your belly and tapping your head at the same time. [Laughs]  Ballerinas are true athletes.

TVLINE | This week, we get to spend a whole episode exploring Dawn and Hank’s origins, unpacking all of their “stuff.” And there is a lot.
Again, what I love about this show is it’s not just about superheroes being superheroes; this is a story about why these characters are who they are, and how they’ve become these vigilantes. In this episode, there’s nothing “superhero” about it — it’s all relationship, it’s all history, it’s all family, it’s all the baggage we have and how you deal with that. You learn the reason Hank and Dawn connected and why they need each other so much and why they love each other so much. I think that’s so interesting to explore.

TVLINE | And we get the origin of the first Dove — Hank’s brother, Don Hall (American Gothic‘s Elliot Knight) — which I was not expecting.
Which I think a lot of fans will really appreciate, because I have heard a lot of people point out, “Well, Dove used to be a guy, his brother,” and that’s true, so I really love how true they’ve stayed to the comic in that regard.

TVLINE | Did anything surprise you about any of the backstories? I mean, Hank’s childhood stuff is kind of dark.
Yeah, I was really surprised by that. But I was also excited by them not being afraid to go that deep and to go that dark; that’s real stuff. It’s a superhero show, sure, but we’re tackling real subjects and really sensitive subject matter and really relatable stories. This is a very personal episode for me, and for our writers, and it was a really emotional and meaningful episode to work on. It parallels with me dealing with losing my mother [in 2008]. I understand what it means to lose your mother and having to deal with that. It was very personal to a lot of us.

TVLINE | You have talked about how Hawk and Dove represent war and peace, and it struck me while watching this episode that when Dawn “strikes out on her own” for the first time, she’s not looking to pick a fight. She’s looking to make peace.
Right. She wants [this guy] to admit what he did. She wants justice.

TVLINE | What would you say her code is, when it comes to deciding to fight?
I think that her first instinct is to try for peace and for justice; she wants to go about it the easiest way possible. But if that doesn’t work out, she’s not afraid to go the extra mile. Also, she’s not going to let Hawk go out on his own, so she’ll do what needs to be done. If it has to be the hard way, then it has to be the hard way, but that’s not without trying the most peaceful way first. Whereas, with Hawk, Hawk’s ready to go immediately.

TVLINE | How would you say this episode fits into the ongoing story that’s been happening since we last saw you, Episodes 3 through 8?
Are you talking about [this week’s] final scene…?

TVLINE | There are other moments, yes, but a familiar name is said in the final moments of this episode…. Is that planting a seed for what’s left to come this season?
Of course, because we’re like, “Who the hell is [NAME REDACTED]?!” Yes, that’s definitely teasing something to come.

Want more scoop on Titans, or for any other show? Email [email protected] and your question may be answered via Matt’s Inside Line.