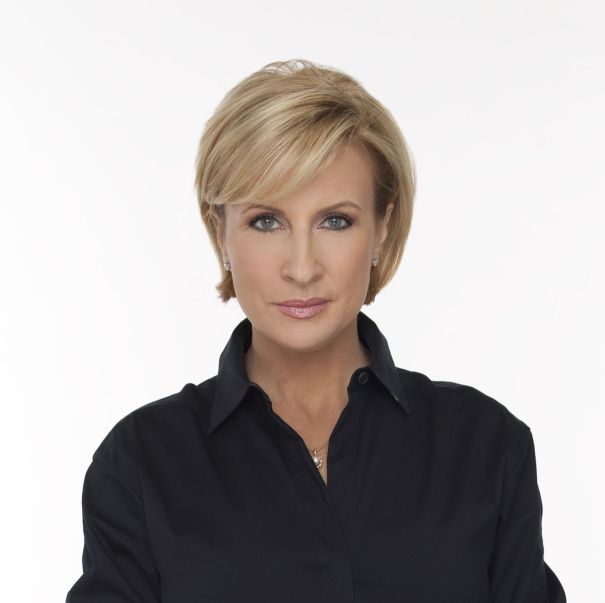 “There’s a lot going on, but  I want to get to something first,” she segued clunkily after a recap of the morning headlines.

“I was off yesterday for a family matter…but I wanted to address a term that I used on this show on Wednesday that was vulgar. I knew it right away, and I tweeted that it was a terrible choice of words and that I was sorry.”

“But please allow me to say this face to face: The term is crass and offensive and I apologize to everyone, especially the LGBTQ community, and to my colleagues, for using it.”

“It was a mistake. My father would have found it so unbecoming and disrespectful and he would have told me. I will work hard to be better. But I just want to say, on camera looking viewers straight in the eye, I am really really sorry.”

The daughter of diplomat Zbigniew Brzezinski had previously apologized via Twitter the day she made the offensive remark. But this was her first on-air address of the slur she used during a segment on Wednesday’s Morning Joe about Saudi Crown Prince Mohammed bin Salman’s role in the in the murder of Washington Post columnist Jamal Khashoggi in the Saudi Consulate in Istanbul. The CIA has concluded MBS ordered the killing, but President Donald Trump is sticking by the prince, and Pompeo is among those standing with Trump on this.

Blasting Pompeo’s appearance on Fox News Channel, during which he dodged MBS questions, Mika Brzezinski said, “Are the pathetic deflections that we just heard, when [Pompeo] appeared on Fox & Friends? Is that a patriot speaking, or a wannabe dictator’s [slur]?” Brzezinski asked. “Dead serious, I’m asking. Are these the words of a patriot?”

By the time Brzezinski apologized via Twitter, she’d already been well scorched on social media, including U.S. ambassador to Germany RIchard Grenell, who tweeted, “Your words demean, mock and therefore try to control whole groups by minimizing our humanity.”

In her apology, Brzezinski apologized, telling critics she “totally agree[s]” with them, calling it a  SUPER BAD choice of words.”

“I should have said ‘water boy’…like for football teams or something like that,” she tweeted, adding “SO SORRY!” and an apology to Sen. Dick Durbin who was on Morning Joe at the time of her offensive remark.

Trump weighed in Thursday, complaining Brzezinski was being held to a different standard than conservative who have made homophobic remarks.

“If it was a Conservative that said what ‘crazed’ Mika Brzezinski stated on her show yesterday, using a certain horrible term, that person would be banned permanently from television….” Trump tweeted.

Don Jr. weighed in too, wondering why Kevin Hart had to step down as Oscars host for past homophobic remarks, but Brzezinski had suffered no consequence for her on-air slur.

NBC News reported – citing “a source familiar with the situation, who was not authorized to speak publicly” – that MSNBC did not plan to discipline Brzezinski and considered the matter resolved. NBC News oversees MSNBC.