Michelle Young and Nayte Olukoya have unfollowed each other on Instagram several weeks after their breakup. They’re also no longer tagged in each other’s photos—which popular fan account @bachelorettewindmill (an absolute must-follow for Bachelor Nation news and updates) notes could indicate that they’ve blocked each other.

Michelle and Nayte announced their breakup on June 18, sharing emotional Instagram posts. In her statement, Michelle told fans “I’m struggling to say that Nayte and I will be going our separate ways but I stand with him in knowing the heaviness that is present in both of our hearts as this relationship has been very real for us.”

She added a note to Nayte specifically, saying “To you, Nayte, you quickly became my best friend and the love I have for you is incredibly strong. I will never stop wanting to see you succeed. I will always acknowledge and appreciate the adventures, support, and growth both Nayte and this experience have brought me. At the same time, I’m deeply hurting and will need time and space to work through this heartbreak.” 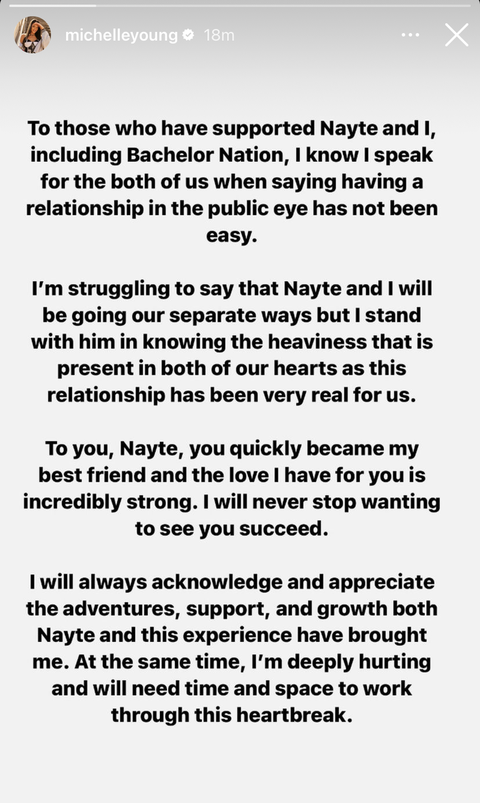 Following the split, Nayte hopped online to deny cheating rumors, saying in party “Yes, I like to hang out with my guys. As she likes to hang out with her girls. Nothing wrong with that. If anything, super healthy. We are social people. Not everyone who goes to bars are cheaters.”