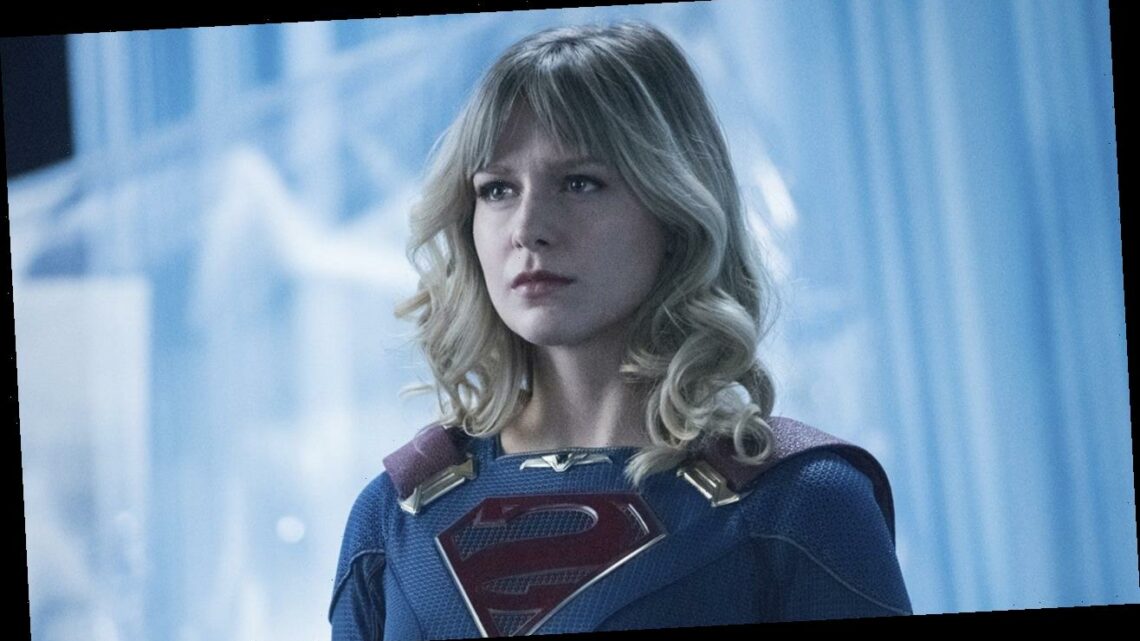 Melissa Benoist: How 'Supergirl' Ends 'Does the Character Justice'

As Melissa Benoist prepares to hang up her Supergirl cape, the star of The CW’s outgoing superhero drama acknowledged the decision to step away from the character that transformed her into a role model for millions of young girls was a difficult one.

“It was a massive decision, but I think as everyone was talking and we were able to step back and look at the big picture. Everyone that’s involved in the show can say with certainty how proud we are, how far we’ve come and what we’ve been able to accomplish in six years. And six years is a great run of a show,” the actress tells ET. “As bittersweet as it will be to say goodbye, I could not be happier with what we’ve created.”

Supergirl kicks off its final 20-episode run on Tuesday with a premiere episode that picks up right where last season left off, with Braniac (Jesse Rath) in dire straits after unsuccessfully trying to stop Lex (Jon Cryer). As things get exponentially worse, Kara realizes the only way to stop Lex is to sacrifice herself. It’s a dramatic jolt to the show’s swan song, but one Benoist is more than satisfied with in her final chapter as Supergirl. “They pitched me how the series will end and how Kara’s journey will wrap up on the series finale, and I could not be happier with it,” she says.

Benoist discusses the final season of Supergirl, reflects on six years as a superhero and shares advice for Sasha Calle, who will play the DCEU’s version of the character in the upcoming film, The Flash.

ET: Did you have your own personal desires and hopes for how Kara’s story ends?

Melissa Benoist: I feel so fortunate that I’ve gotten to do so much with this character over the last six years. So I didn’t really creatively have too many caveats or desires or wishes because I feel like so many of those have been fulfilled. But there was one caveat that I had that I was like, “You guys, please don’t do this.” Just don’t do this and I’ll be happy. And you know what, they’re not doing it. So I’m happy. They pitched me how the series will end and how Kara’s journey will wrap up on the series finale, and I could not be happier with it. I think fans will be really happy with it. It does the character justice, at least my iteration of her on our show. So I’m really happy with the way it’s ending.

Supergirl has spanned some really major personal moments for you. Just what does it feel like to be saying goodbye to the character right now at this point in your life and in your career?

Oh my gosh, I feel like I was a kid back then. Essentially I was. I was 25, 26 — and not just things in my career have changed, but personally my life has. A lot happens in six years and staying with the same character that entire time is a really unique experience. Sometimes I almost feel like I was really challenged and pushed to become the person that I am now because of the circumstances of the show and shooting it and how difficult it can be sometimes. The pressure is there. But then also the joy is of having that pride and seeing it move young girls and being the role model that she is as a character and carrying that with me. I do feel like I’m still in the thick of it, and talk to me in five years — I’ll probably be able to reflect on it a little bit better. But that being said, it’s wild to look back on the last six years and see how much has changed. I think the rest of my cast would agree with me. I don’t want to speak for anyone, but it does feel like a huge sense of accomplishment because it’s not easy making TV to begin with, especially a superhero show.

Has your relationship with your character shifted because of your own personal growth as a person in these six years?

Of course. Essentially, I feel like I’ve sort of grown up with her. I’m in my 30s now and I’m a mom and I feel like I understand my strength, not physically, but my fortitude as a woman so much better than I did six years ago. I’ve got a confidence that I feel like I could never have found if I hadn’t played this character just in knowing what I deserve as a person and in relationships and it taught me so much — not only being the lead of the show, but the character in general. What she stands for and always fighting for what’s right, and leading with your heart and compassion and finding your family and holding on for dear life. All of those things continue to resonate in my personal life and they always will. 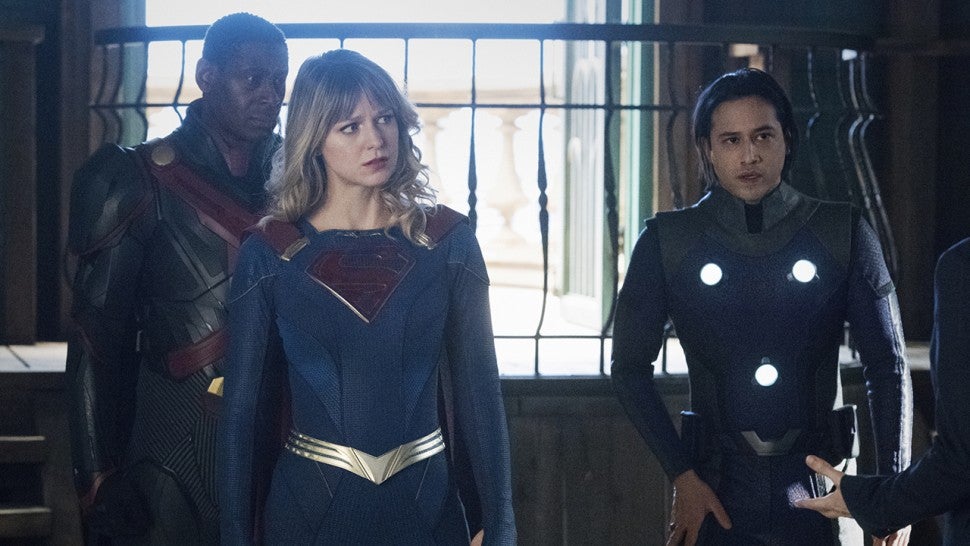 Have you found yourself trying to make every moment on and off set last?

Oh, completely. It’s so easy to get wrapped up in the medium of the day sometimes, but I will say every time we finish an episode, sometimes this season, a lot of the directors that are coming back this season have been with us from the beginning or very early on in the series from season 2. Some of these directors will wrap an episode and there’ll be like, “Oh my gosh, that’s it. That’s my last time.” Those moments hit different. In general, all of us are really trying to be present and enjoy each other’s company and really enjoy creating this last season together. The pandemic had put everyone in that headspace anyway to be present. I’m just grateful and happy to be working in general, but because it’s the last season of course. We’re all trying to have a good time laughing. Just love each other as hard as we can before it’s over.

The show has also been one of the most politically minded shows in the Arrow-verse and frequently referenced current events and what’s going on today. Does it feel right that it saw us through the last administration?

Yeah. I actually didn’t ever think of it, I haven’t thought of it that way. That this past administration is over and now we’re going out too, but it’s kind of fitting. I always have felt that our show was the strongest when we leaned into that. My favorite season that we’ve done so far was season 4 where we really laid heavy on the commentary. This season will be no different. This will be inspired by real-world issues — both the Black Lives Matter movement and how some people felt disempowered because of circumstances that we’re all living in with the pandemic. Those are issues we’re going to tackle. The producers and showrunners have always done a really good job at trying to reflect that and trying to address what empowers people and what the heroes on our show can do to set an example and use their platform.

Talk a little bit about the final season here. The first episode doesn’t skip a beat as it picks up right where things left off last season. How would you tee up the final season?

It was supposed to be our season finale last year. We had some work to do, but I think fans definitely can expect to see real-world issues and our heroes grapple with things that relate to what we’ve all dealt with and have been experiencing and coming to grips with the last year. I think Kara’s journey specifically, there’s a lot of discussion about power and the abuse of it, and the limits of it from within this year. Kara’s always grappling with that as an alien and a Kryptonian with the kind of powers that she has on Earth, but both our villains and our heroes will be making decisions because their power is almost limitless. So where do they draw the line, I think, is the question we’ll be asking this year.

Sasha Calle was recently cast as the DC movie universe’s Supergirl. Any words of wisdom for her as she gears up to don the cape? And what do you feel is your legacy from your time as Kara and Supergirl?

You know what? I don’t have any words of wisdom because it’s such a personal thing. All I can say is that I can’t wait to see her version of the character, and her and I have DMed on Instagram. I reached out to her when she got the news in the video when she found out she got the role, which made me cry, because I felt that and this role, she just seems perfect for it. I think that staying true to yourself and playing this role is the best thing you can do. I have no doubt that she’s going to do that. I feel like that’s what I’m most proud of, is that I’ve never compromised in playing this role what I really felt mattered for her and for what we were saying to young girls out there. What we represent was always at the forefront of my mind in every line I said and every step I took. Every heat vision I did, every freeze breath I blew, it always came back to this. This is for young girls. I did it as the first female superhero show since Wonder Woman, but Sasha will be doing it as the first Supergirl who is a person of color.

What will you miss the most?

Seeing my friends in the cast and crew. I’ll of course miss the cast. And you know what, I’ll miss the suits. I’ll miss flying. Those green screen days. It’s like movie magic. It just felt always cool. I will definitely miss that.

Supergirl premieres Tuesday, March 30 at 9 p.m. ET/PT on The CW. For more, watch below.