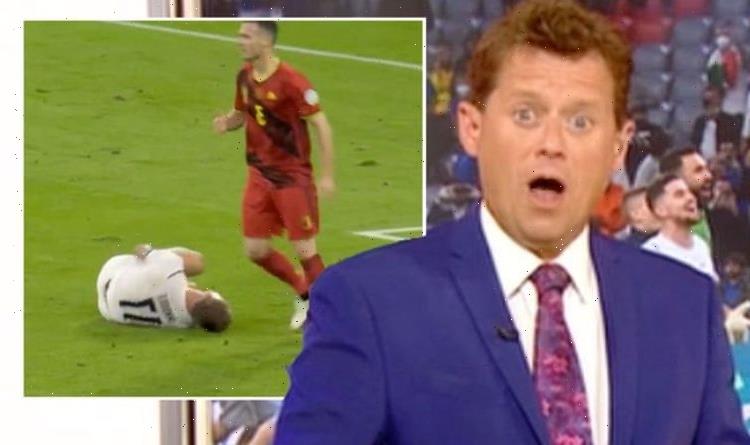 On Friday evening, Italy secured a spot in the Euro 2020 semi-final after beating Roberto Martinez’ Belgium team 2-1. Goals from Nicoló Barella and Lorenzo Insigne were enough to see off the Belgian squad, who’d staged what looked like the start of a comeback through Romelu Lukaku’s penalty. However, the result wasn’t the only thing that BBC Breakfast’s Mike Bushell said had caught fans’ eyes as he, Charlie Stayt and Rachel Burden discussed striker Ciro Immobile’s seeming play-acting on the field.

“Now, there was one moment in the Italy win which has engaged fans on social media,” Mike said to BBC viewers.

He continued: “Thankfully, we haven’t seen too much play-acting at these Euros but what about this?”

A clip then played from the match just moments before Barella’s opener which showed Immobile take a knock off of a Belgium player in the penalty area.

Mike explained: “This was in the build-up to the opening goal. Ciro Immobile falls down injured, very dramatic.” 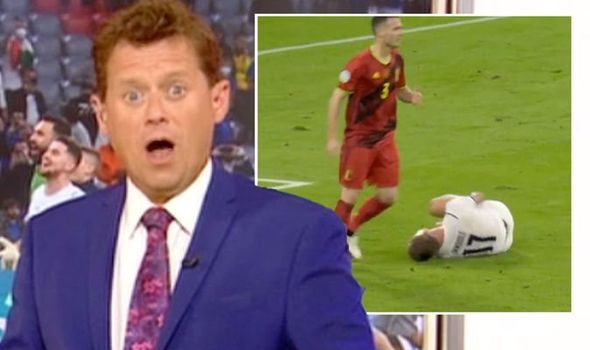 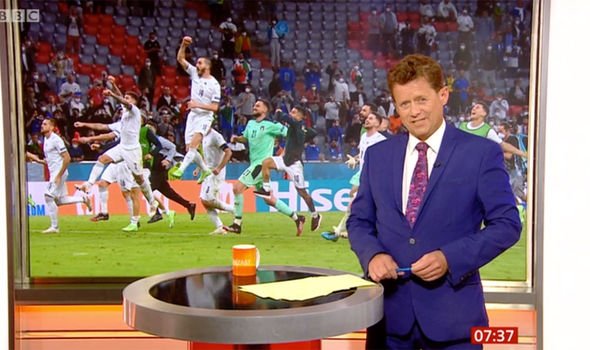 As the clip continues and the referee ignores the striker’s supposed injury, Italy score their first goal.

“The Belgian defence is distracted, maybe is hurt (but) play carries on and teammate Barella scores a great goal.

“But it’s the apparent sudden recovery of Immobile which has angered many fans,” Mike added as the camera panned to the striker on the ground.

After seeing his teammate score, Immobile jumped to his feet and ran over to celebrate with the players. 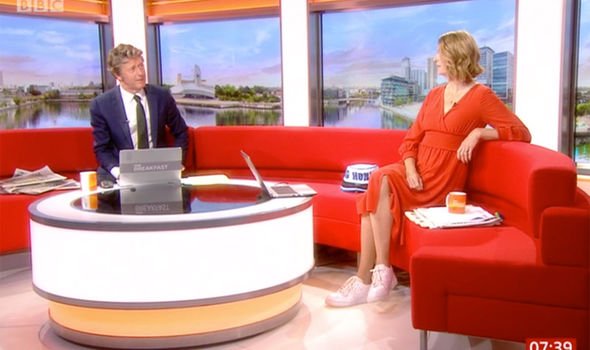 “Once he realises there’s a goal, he looks up and ‘Oh’, any injury seems cured,” Mike mocked.

The sports reporter then revealed some fans are calling for Uefa to take retrospective action against the player for simulation.

Rachel replied to Mike’s comments to tell him how viewers have been getting in touch with “genuine anger” about the moment.

After watching the clip one more time, Charlie and Mike began to mock the incident, with the latter joking: “Maybe the euphoria of the goal masked the pain?”

And BBC viewers aren’t alone as pundit Alan Shearer delivered a brutal critique of the moment during the match’s coverage.

“I don’t even want to laugh at that because that is pathetic,” Alan said after watching the moment back.

The former Newcastle striker continued: “You can see him have a look at the referee before he even goes down.

“It’s pathetically embarrassing, that’s what it is!” Alan raged.

The former England number nine did provide his analysis of the game as well.

“It was a magnificent game of football, end to end,” Alan commented: “The Italians had to use all of their know-how and experience in that last 10 or 15 minutes.

“The two old guys at the back [Chiellini and Bonucci] were brilliant. It was a big talking point whether Lukaku was going to get in behind them and whether they were going to get done for pace.

“But they stood firm with everything that the Belgians threw at them in the last 10 or 15 minutes. They were magnificent.”

BBC Breakfast airs daily at 6am on BBC One.

Our Yorkshire Farm: Why is Amanda Owen moving away from Ravenseat?