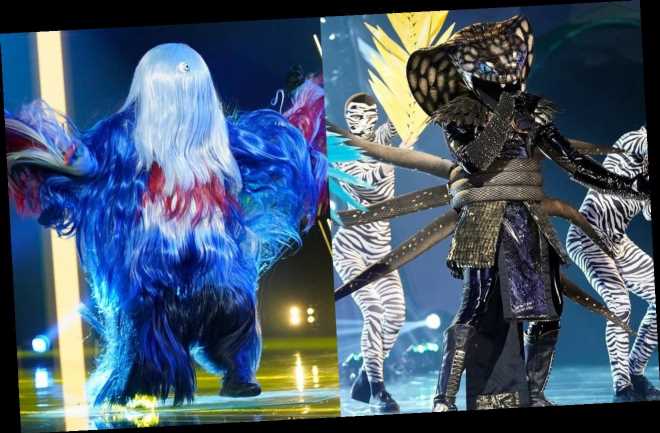 The episode sees Crocodile, the Serpent, the Whatchamacallit and the Seahorse from Group B performing before two of them are sent home in a heartbreaking double elimination.

AceShowbiz -More disguised celebrity singers performed in a new episode of “The Masked Singer“. Airing on Wednesday, November 18, the episode saw two of the four singers from Group B being sent home in a heartbreaking double elimination.

The first singer to take to the stage to perform that evening for Group B finals was the Seahorse. Singing Britney Spears‘ “…Baby One More Time”, she flaunted a spot-on Britney impression. Her final clue said that she was never in a girl group. Among the guesses by the panelist, Robin Thicke, Ken Jeong, Jenny McCarthy and Nicole Scherzinger and guest panelist Cheryl Hines, were Kesha (previously known Ke$ha), Kellie Pickler and Sia Furler.

Following up was the Crocodile, who belted out “Bleeding Love” by Leona Lewis. He said that he was in a huge cult classic movie for his final clue. The panelists thought that the Crocodile might be Jared Leto, Jordan Knight or Justin Guarini.

The Whatchamacallit, meanwhile, showed off his swag as he opted to perform “Lean Back” by Terror Squad featuring Fat Joe and Remy Ma. As for his final clue, he said that he won a championship. The panelists threw some names including Lonzo Ball, Carmelo Anthony and J.B. Smoove.

Concluding the night was the Serpent. He hit the stage to sing “Cool” by Jonas Brothers, flaunting his smooth, slightly raspy soul vibe. Despite looking reversed tonight, the Serpent was praised by the panelists. Robin called it a Super Six performance, while Cheryl dubbed the Serpent sexy. Jamie Foxx, Donald Faison and Dr. Elvis Francois were among the guesses.

After the voting process were done, the Seahorse was announced to be first singer heading to the Super Six that night. Before viewers learned who joined her in the Super Six, the Whatchamacallit was unmasked. Ken changed his final guess from Damian Lillard to Lonzo Ball, while Robin was convinced he was Michael Strahan. Jenny initially thought he was Winston Duke, but now she named Devin Booker. The Whatchamacallit was actually Lonzo Ball!