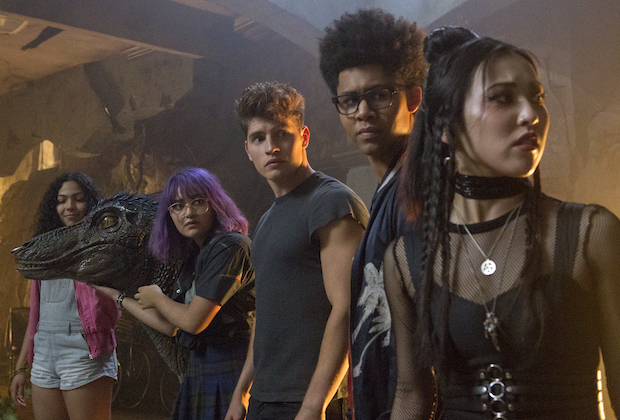 Whereas Marvel’s Runaways with its freshman run zeroed in on the kids’ discovery of their parents’ treachery and PRIDE’s subsequent suspicion that their human-sacrificing, hole-drilling jig was up, there’s a lot more afoot in Season 2 — and that’s a good thing.

First, a bit of housekeeping: Based off just a few episodes, my Season 1 review assigned the Hulu series a grade of “A-,” which in retrospect was admittedly on the high side. (I suspect that I was grading on a curve, based off “other” Marvel series released last fall. 🐶) So, if last year in actuality netted out as a “B,” Season 2 marks a step up (based on the eight or so episodes I have screened).

Picking up not long after the events of the finale — which turned Nico, Chase et al into bona fide runaways — Season 2 (all 13 episodes release this Friday, Dec. 21) quickly finds the kids discovering and making camp at the comic books’ infamous “hostel,” which here has been conceived as a grand manse that long ago was swallowed by the ground near the Griffith Observatory. (And yet so much natural light!) There, they juggle ordinary realities (e.g. generating cash flow, powering the place) with both blossoming relationships (at least one nascent romance screeches to a halt a few episodes in) and the decidedly otherworldly matters in which they are enmeshed.

While the teens puzzle over what exactly their ‘rents are hiding deep down at the excavation site where they recently squared off, Karolina (played by Virginia Gardner) is determined to divine the nature of her particular powers. Perhaps to obfuscate his relative powerlessness within the gang, Alex (Rhenzy Feliz) splits off for a bit into his own story, picking up some cash by doing odd jobs for Darius — though I have to say, this B-story serves Geoffrey Wilder’s frenemy (DeVaughn Nixon) quite well. Though full of badass bravado on the streets, Darius also is desperate to do right by his baby mama (though have no fear, he remains open to any dirty and or double dealings).

Back at the hostel, Gert and Chase (Ariela Barer and Gregg Sulkin), as well as Nico (Lyrica Okano) and Karolina, immediately embrace the freedom they and their romances now enjoy — though conflicts in ideologies, the occasional bombshell, and maybe even a most unexpected interloper will test the two twosomes. The group en masse meanwhile will fall on different sides when a new runaway, Topher (Jan Luis Castellanos), wriggles his way into the mix.

As for PRIDE, there is a whole lotta infighting going on these days in the immediate wake of what I will call “Truth Day,” when certain dark secrets came to light. While Jonah (Julian McMahon) forges ahead with agendas both all-powerful and personal, the adults who unarguably got short shrift during Season 1 are brought to the fore this time around. Namely, Janet Stein (Ever Carradine) is handed an opportunity to truly prove her value to PRIDE (and perhaps to her family as well); the Yorkses (Kevin Weisman and Brigid Brannagh) progress beyond merely supplying comedic relief; and at least two of the dads are full of surprises in the episodes to come.

Of course, some come to a Marvel series for the superheroism of it all, for the whiz-bang powers and effects. Having now seen most of two seasons, I have made peace with the fact that Karolina’s “glowy” appearance, which here is employed often, is supposed to look precisely as it does — “illustrated” versus photo-real. The Wican staff wielded by both Nico and her mother Tina (Brittany Ishibashi) is used for a variety of cool effects, including the freezing of a swimming pool while someone is inside it (!). Old Lace has a recurring presence, whether nuzzling up to someone in the hostel or blindsiding a bothersome skater boi. A tussle between Molly and a second super-strong character is intensely realized, with hurled Dumpsters and such. But alas, Chase’s “fisticons” continue to be much of a non-starter.

Pictured: Pregnant teacher, 34, killed with her unborn baby in crash